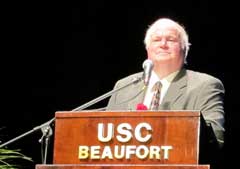 The first major motion picture shot in South Carolina was the adaptation of Pat Conroy’s first novel. The Great Santini was also the first film to shoot in Beaufort and the movie that put the state – and the Lowcountry – on Hollywood’s hot sheet. Four of his books have made it to the big screen, so far (all but one were filmed here). The only Conroy property that hasn’t been optioned is his cookbook, and with the success of Julie and Julia,  I wouldn’t rule that out. Beach Music and his current bestseller, South of Broad, are said to be heating up. Brad Pitt’s Plan B Entertainment owns the rights to My Losing Season, a property begging to be fast-tracked considering the recent blockbuster success of The Blind Side – another sports story with a message.

During the culmination of the 2010 Beaufort International Film Festival (February 18-20) Conroy was presented the Jean Ribaut Award for Writing Excellence, a hometown honor he says he was “sincerely thrilled” to receive.  The night before, Pat along with friends and Santini cast mates, Blythe Danner and Michael O’Keefe, attended a cocktail reception at Tidalholm, where much of the film was shot (see the accompanying interview with O’Keefe). Our plan to have this conversation  “on location” proved foolhardy. Famous authors and actors are much in demand at such affairs it seems. A few days later Pat called and during the brief pre-interview chit-chat I mentioned that his friend O’Keefe had a website. “Does Blythe have one?” he asked. “I’m not sure,” I said, “but I wouldn’t be surprised. These days everybody seems to have one.” “I know,” he replied. “I just found out I have one. It came as a complete shock.”

The Interview, Part I

Mark Shaffer: Santini was a life-changing event for a lot of people. What was it like to watch Michael O’Keefe breathe life into Ben Meechum?

Pat Conroy: He was a kid. It was amazing to watch. I hadn’t seen the movie in twenty,  twenty-five years, and it shocked me how good it was.

MS: It holds up pretty well.

PC: I was completely stunned. These people were great actors. 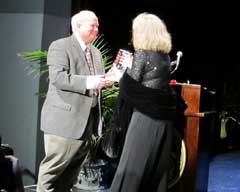 MS: Does it still seem a little weird that Michael is, in effect, playing you?

PC: How about this: I’m sitting in Bay Street Trading Company signing books [last year] and he’s in the Verdier House signing The Great Santini across the street. It’s like this guy took possession of my soul and never quite let go, which is strange to me. It always is.

MS: He mentioned that. He says that there’s been a connection between the two of you from that first meeting in Charleston before filming began.

PC: No question. Also people tell me he looked kind of like me when I was in high school. And Blythe Danner certainly had a resemblance to my mother.

MS: Speaking of that, I really enjoyed your awards speech,  particularly the part about your family’s reaction to their film selves.

PC: Oh, my God. I’m so full of B.S. I never know what I say anymore. I’ve got about four hours of crap I can get up and talk about. You never know what’s going to come out at any particular moment. Did I tell the story of the movie coming out in Beaufort?

PC: My family is sitting i 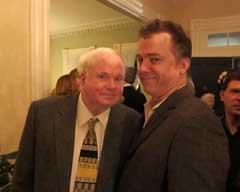 n the front row and the town of Beaufort is sitting behind them. (Laughs) Good God. And when Duvall beat up the whole family in the movie, the town of Beaufort is actually a bit disturbed that the real family is sitting there and they’re being torn apart by Robert Duvall on screen. There’s this shocked noise going through the audience, this whisper. And when it was over, when Duvall had beat up his family and stumbled out drunkenly into the night, my brother, Jim, leans down at the end of the aisle and says “Bambi. Duvall was Bambi compared to Dad. They should’ve let Dad show Duvall how to really tear up a family.” And of course, the Conroys – being us – screamed with laughter. Naturally the town thought we were more nuts than they must have thought we were before. That’s the favorite story about the family first seeing the movie.

MS: You once told me that they were all horrified at the idea of the film being made, but they all loved the film versions of themselves.

MS: Santini was the second book to make it to film. You’ve said it always freaks you out a little when Jon Voight introduces himself on screen as you in Conrack (the film version of The Water is Wide). I hadn’t heard that he wouldn’t talk to you on set.

PC: I did not realize until I read Christopher Dickey’s book Summer of Deliverance: A Memoir of Father and Son that James Dickey had practically driven Voight and Burt Reynolds nuts on the set of Deliverance. So I didn’t know what the reason was for about twenty years. He just didn’t seem interested in talking to me at all. 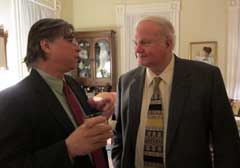 MS: He just associated you with your old professor – your mentor – and his tormentor.

PC: Yes. The one thing that I get to brag to my children about is that I got to meet Angelina Jolie who was six months old. And I tell my kids I whispered, ‘go into showbiz kid, you’ve got it.’

MS: I literally bumped into her at a screening in Vegas once and she scared the crap out of me. But that was her Billy Bob phase. Very scary.

MS: The set of Santini must have been quite a departure from the Conrack experience.

PC: It was wonderful. I got to watch my mother teaching Blythe Danner how to say the Rosary (laughs). Dad and Mom had not spoken since the divorce and there was tremendous tension when I brought dad on because Mom had the movie crew thinking it would be like meeting Godzilla. And so when I first brought Dad on [set] people were reeling back in horror. Mom had done a great job. She won the PR battle on that particular front, hands down.

MS: But your dad was a pretty charming guy, 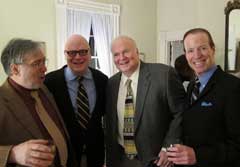 he became even more charming. And once again, after the movie and the book my father changed his entire personality.  (Laughs) I didn’t even recognize him the last fifteen years of his life. I’d say “Dad, where was this great, great guy when I was growing up – this fabulous, wonderful, animated, witty guy that I missed for the first twenty-one years of my life?’

MS: What was his answer?

PC: His answer was to say, “Son, you were too shallow to know the real father who was raising you.” Dad was very good, very good at that.

MS: Were you still living on The Point when they were shooting the movie?

PC: I was in Atlanta by that time.  But it was amazing to watch this thing being filmed on The Point – to watch that amazing scene [between Duvall and O’Keefe] being filmed on the Green. So it all seems related. Having that party in Tidalholm was very moving to me.

MS: How did that feel? I got the sense from Michael that it was a little eerie, but in a good way.

MS: I almost feel as though it should have been designated as some sort of historic landmark.

PC: And The Big Chill was made there, Forest Gump [was shot in Beaufort], and it’s funny how these movies have become part of my tour: showing people where Barbra Streisand stayed or where Nick Nolte stayed. Blythe Danner stayed in one of my favorite houses in Beaufort, near where I used to live on Hancock. It used to be called The Treehouse – very modest, but very beautiful.  She told me the other night that that was one of the happiest times for her children in their lives, the making of The Great Santini.

MS: [Danner’s daughter] Gwyneth Paltrow’s mentioned in interviews that her time in Beaufort was among the happiest of her childhood, running wild and barefoot through The Point.

PC: No kidding? That’s wonderful. You know,  it was wonderful meeting her. She was a little girl then. Of course, I tell all my children that I told her ‘Make sure you get in the movies. You’ve got it, kid.’ 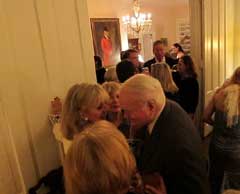 MS: Once again that proved prophetic.

PC: My kids are not jealous of me for having met Robert Duvall or Blythe Danner or Jon Voight, but they are hideously jealous that I met a six month-old Angelina Jolie and a six-year old Gwyneth Paltrow.

MS: When I talked to Michael [O’Keefe] in the house where the movie was filmed, he mentioned that both you and your Dad were on the sidelines to watch them shoot the infamous basketball scene.

PC: Yes, we were watching that. What a happy day that was…

Coming up in the March 17th issue, part two of our conversation with Pat Conroy, including:

Get more online at www.lcweekly.com and email Mark Shaffer at backyardtourist@gmail.com 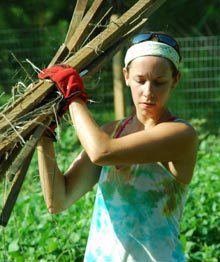 Attack of the Crop Mob 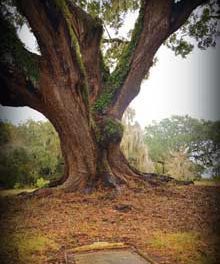