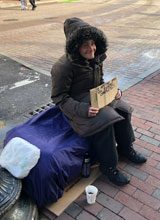 “There is a lot that happens around the world we cannot control. We cannot stop earthquakes, we cannot prevent droughts, and we cannot prevent all conflict, but when we know where the hungry, the homeless and the sick exist, then we can help.” – Jan Schakowsky (D-IL 9thDistrict)

Welcome to a festering sliver of the American pie chart. Homelessness is a growing problem in Beaufort County and increasingly affects children. Here in Massachusetts it affects 20,000 people, or .29 % of the population. Nationally, there are about 550,000 homeless (some 58,000 of them are veterans) out of 330M people, or .17 %. That half million-plus souls is about the population of Albuquerque, the 32ndlargest city in the country.

Numbers, numbers, and who even sees all these people without homes? Many of us do not, at least not regularly. That included me until moving to Boston. Of course many people ignore them here, too. Harvard Square is a fun place to hang out. A terrific news stand, colorful shops, eateries, a little joint that sold me a t-shirt that reads, “Harvard Law” in big letters and “just kidding” in small print below it. The related gag is, I went to Harvard; it was a Wednesday.(Thank you Mitch Hedberg for the inspiRAtion.)

So there I was, enjoying a cigar across from the newsstand, taking in the people and vibrations. I saw wriggling strands of students, tourists, professor types, cops. They looked prosperous enough. But one person especially caught my eye. Carrie.

She sat hunched down, engulfed in a huge parka, on a makeshift seat like a winter sparrow. Looking cold, pitiful. The wind blew hard enough to make staying outside pretty unpleasant. She held a sad little hand lettered cardboard sign that read, “I am the one you ignore completely.” Near her battered shoes sat a paper cup half full of loose change. Mostly pennies with a little silver mixed in. I walked over, said hello, and asked if we could chat for a few moments.  Sure, she said.

Carrie is bright and energetic. She uses sophisticated words and speaks in complete sentences. Periodically she hops up off her squishy blue tarped perch to pluck a piece of litter off the sidewalk and toss it into a nearby trash bin.  Coffee cups, newspapers, sandwich wrappers, all-purpose effluvia. She wears gloves against the cold but they also protect her against heaven knows what gunk. Says she “can’t abide by trash.” Turns out Carrie considers the immediate area around her to be her home. Who wants trash in their living room?

Her background catches my interest. She’s a college graduate, has taken courses through the Harvard Extension School, and says she wants to get into Harvard’s doctoral program in astrophysics. Yikes, I think. My father completed his doctorate in 1962 at nearby MIT in electrical engineering and I still remember him fairly breaking his neck over his studies. Endless Kent filters fogged the air in his modest home office. Twelve year olds remember these things, especially when they deprive a kid of dad time. Even my teachers picked up on that and he tried to make adjustments. God only knows how he managed that.

Astrophysics. Hmm. I wonder aloud at her gumption but silently dismiss her stated goal as out of reach. Carrie is 42. No visible assets aside from her clothes, sleeping bag, paper cup of change. No “ins” at Harvard. She says her sister is a chemistry professor in Vermont. I hate to be cynical but reality calls out to me through the wind. I look up the university. It’s real, alright.  3,152 undergraduates, 352 faculty, mostly non-tenure track adjuncts. A sign of the times, I suppose.

I go back to visit her a few days later. It’s still cold but not as bad this time.  We continue our conversation. Carrie is a strict vegetarian, a cigarette smoker. Both facts create challenges. She says that folks passing by are less giving if they see her smoking or eating. She figures they think she’s not worthy (smoking) or already eating well enough. She also insists that giving drops on Saturdays when the foot traffic becomes a stampede. Too many oblivious tourists, she thinks. I ask her repeatedly if I’m interfering with her ‘take.’ No, she insists. Mild weather also depresses donations.

I offer her an explanation of the Saturday effect. Diffusion of responsibility, an ancient finding from social psychology. The theory holds that with more people around, each individual feels less personally responsible for getting involved.  Researchers John Darley and Bibb Latanéfamously studied the “bystander effect.” If you are being attacked, for example, you have a better chance of someone coming to help (often called bystander intervention) if few others are around. Big group? Good luck.

Dustin Hoffman said,“I mean, I don’t think I’m alone when I look at the homeless person or the bum or the psychotic or the drunk or the drug addict or the criminal and see their baby pictures in my mind’s eye. You don’t think they were cute like every other baby?” I ponder that as Carrie and I continue our conversation. An occasional person wanders by us, rotating slowly as they babble skyward. They are dressed in rags. No cup, no friends, no treatment, no hope. My psychology background only makes it worse to witness. I may be able to help Carrie a little, but these people are far above my pay grade. An older man, ragged and dirty as a trash bin doll, sits on the sidewalk against a building across the street. His sign says, “What you water grows.” He too has a cup with some change. I give him a dollar and say hello. Maybe this makes his hour. I’ll check on him again next time. (Turns out that he is highly verbal and pleasant. Kevin.)

I see Carrie again, this time for over an hour. It’s a lovely Saturday and sure enough, few people donate. She offers me her seat, noting my difficulty standing still for long. Hundreds of people hustle by us, almost no one glancing our way. I hand her a large bill to go get us a couple small items across the street. She returns in a couple minutes with the change. Keep it, I say. “Holy crap,” she marvels.

She participates in a deep underground economy. Her homeless friends pass by and trade with her. A cigarette, maybe a buck or two, a sandwich. Tamra from the Episcopal church stops by with water and sandwiches. Carrie likes peanut butter and jelly.

My feet and back give out and with two little dogs to rouse from their warm bed, I call for an Uber. It finally arrives, a red Toyota, far up the street. I can’t make it out very well. Carrie volunteers to go check and hustles over, her gait almost as gimpy as mine. Back she waddles. “It’s yours,” she pants. We hug, her tiny body buried for a chilly moment in my jacket. I return to my lovely new home, pondering her future.

Carrie goes back to work. She should be ok for a few days. Right? 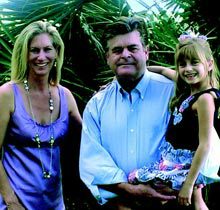 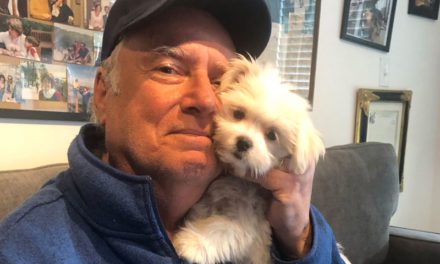