The Most Unkindest Cut of All 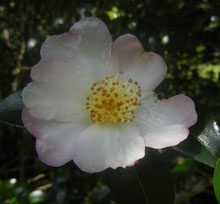 Fall is well underway and winter approaches with ferocious speed - if nothing else, this means that my gushing celebration of Camellia season is due. I have my little dalliances, my mad schoolboy crushes, even the occasional extended affair (I do still love you, Crinum and Hydrangea!) - but nothing comes close to my everlasting devotion to this magnificent mainstay of the southern garden.

The joy is acute this time of year, simply because it is Camellia’s time to bloom. Beginning in early autumn (and even earlier in some locations), the Camellia sasanqua-types first start their bloom. Here on the farm, the early ones are the huge old shrubs, now reaching into the power lines above and stretching fifteen to twenty feet wide, planted originally some seventy to a hundred years ago. There are two of these shrubs, both typical of the sasanqua species, with single blooms which last a day or so on the shrub.

The one behind the farmhouse has almost white flowers, with a light wash of pink on the outside edge. The one in the lawn east of the house, planted next to where the old henhouse used to stand, is a light pink. The small dark leaves make a rich backdrop for the blooms, which start slowly at first – maybe fifty or a hundred flowers at a time – but quickly explode into a blooming frenzy of many hundreds of blooms at a time. Their season lasts well into December. These are the very plain, unimproved, old-fashioned sasanquas that many an old house in the south has had growing forever, and they reward even negligent care with magnificence.

These sasanquas have, of course, long attracted breeders’ attention, and even more spectacular hybrids of similar species with C. sasanqua have resulted in showier and more elegant flowers. There are the classic hybrids - “Bonanza,” a semi-double bright reddish pink; “Shishi Gashira,” a good hot-pink semi-double with prominent yellow stamens; “Mine-no-yuki,” a very elegant pure white, fully double - which are all reliable and easy.

I have a couple of favorites among the sasanqua types. In particular, I am always surprised by 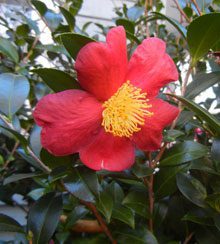 the redness of the exquisite, single-flowered bloom of “Yuletide,” which is set off by the large mass of bright golden stamens at the center – in the manner of the exotic type called “Higo” camellias. “Yuletide” is usually in bloom at Christmas, so its color and form are welcome in decorations this time of year.

Some years ago, I came across “Taylor’s Perfection.” It had huge blooms, semi-double in form, but of a pink color so intense it was hard to believe. I’ve seen it described as “lavender-pink,” as “mid-pink,” as “soft pink.” None of those describe the color correctly; I think it must be seen to be appreciated.

All these Camellia sasanqua varieties will keep the garden in bloom from September through December or January. By the time they are fading from their peak of glory, their cousins, the Camellia japonicas, are coming into their season.

We have camellias in bloom from September through April. Try that with your yankee lilacs! 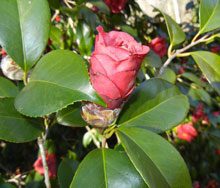 It’s not all celebration, however. There’s a reason for the headline above this little camellia article - the issue of pruning. The flowering season is an excellent time to think hard about pruning, and in my case, to think about pruning hard.

Bear in mind, camellias should need little or no pruning if they are well situated and grown well. Most of ours are exactly that, and - assuming they are spared a cruel freeze causing severe damage - most never require clippers.

Some, however, are severely in need of pruning – hence my not-quite-correct phrase, “unkindest cut,” borrowed from Shakespeare.

Correct and careful pruning can be of enormous benefit to shrubs, especially to those in problem locations or in need of repair or rejuvenation. And that’s the situation I find myself in.

Along the east side of this old farmhouse, my father planted a foundation row of mixed camellias, well away from the wall, and they grew well and qrew quickly. They are simply too large a shrub for the location, and every few years a decision must be made whether to pull them all out, or to prune them back to manageable size for another couple of years.

It has been only two years since my last pruning, and already these shrubs are nearing the height of the windows on the second floor. They must be brought back down.

The correct time for pruning many flowering shrubs - and camellias are among them - is just after they finish flowering. Since the earliest-blooming sasanquas will finish while the weather is still cold, with freezes likely into March, I am always hesitant to begin pruning too early. It’s a balancing act.

The problem with early pruning is that those cuts, while removing undesirable growth, actually spur the hormones which make the plant start to send new growth. Such new growth would be killed by any frigid weather to come, so I often delay pruning until I feel safer about freezes.

But if I delay too long, the new growth which develops will fail to set flower buds for the next fall. That’s not a disaster - after all, they will continue to grow and bloom the following year - but it does mean a missed bloom season.

So, I am anticipating a pruning time for these shrubs beside the house to be March – early, mid, or late, depending on how the freeze outlook is.

The pruning itself, the actual cut, is pretty simple. In this case, I am reducing the size of the shrub severely, so I will completely remove the most vigorous of the new branches, cutting all the way back to the trunk at the base. Then I will attempt to shorten the remaining limbs by cutting back to a node, which is that point on the stem where a leaf or smaller branch was attached.

I’m particular about the location of the node I choose. When it’s possible, I like to cut just above a node which faces in the direction I would like a new branch to grow. It is important to remember that pruning does two things: it removes growth, and it encourages new growth. I want to encourage the new growth to go in the direction that makes for the best shape.

It’s a good opportunity to remove any old, dead branches; and if the growth has been too dense, a little thinning out of interior branches can encourage good airflow through the shrub. This helps keep the plant healthy.

For the brave or the adventurous, pruning presents the gardener with many branch tips. This is a chance to experiment with rooting these cuttings and making new plants for the garden. The process is fairly straightforward, but describing it will have to wait for some later posting in this space. Or do your research on the internet, or seek the advice of an experienced neighbor or a Master Gardener.

Camellias have been called “the Queen of the southern garden,” a description I would hardly dispute. They ask little of the gardener, and they provide one of the showiest - and lengthiest - bloom seasons of all our garden plants. They are rightfully celebrated and admired worldwide. Just ask any gardener. 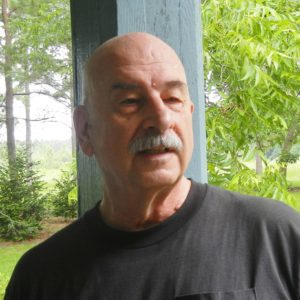 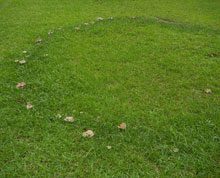 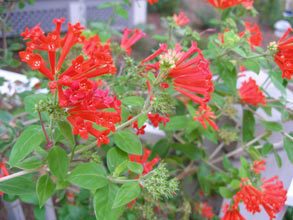