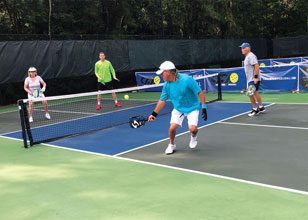 The country’s fastest growing sport is also the Lowcountry’s.

“I have heard of pickleball, but have no idea what it is,” many comment when the subject arises. Pickleball is the fastest growing sport in America! It is described as a cross between tennis, ping pong and badminton. Played on courts smaller than tennis courts, the ball is plastic with holes in it, like a wiffle ball.

Sometimes thought of as a sport for active seniors, it continues to gain popularity in all age groups. It is a fun, addictive game that is easy to learn and safe to play.  Safe that is, if flat-soled shoes are worn, muscles are stretched and warmed up and the first few outings are focused on understanding body movement and racquet position.  Physical therapists and orthopedic specialists have seen increased traffic due to players injuring themselves on their first or second outing because of these very things. Many players will confess that their bodies aren’t up to the demands of tennis but still want to be active, have fun and socialize.

Kelly Procida, age 30, left New York City on March 20 when COVID-19 expressed its first surge of infection, and moved in with her parents in Coosaw Point to work remotely from their home.  Kelly’s parents, Chris and Barbara, had just relocated to Beaufort in June 2019 after Chris spent the bulk of his career in Singapore.  “My dad was playing and I decided to check it out for the exercise and to get out of the house after working all day at home for UNICEF USA. The players were very welcoming and I had a lot of fun. I just love it. We play four times a week. I’m addicted now.” Kelly plans to return to NYC in January 2021.  “I want to work on my 3rdshot drop and hitting the ball harder before I go back,” Kelly said.

Current research indicates that in the U.S., pickleball has grown to over 3.8 million core players at a rate of 11-13 % a year, compared to tennis – which is decreasing 3-5 % a year.  According to Jeff Conradi, A “USA Pickleball” District Ambassador for South Carolina, USA Pickleball (originally USAPA) was formed in 2005 as the governing body with over 40,000 members and 1,900 ambassadors.  Jeff is a professional pickleball instructor and partners with Habersham players to coordinate and mobilize the sport there.

While Sun City, Hilton Head Island and now Latitude Margaritaville Hilton Head are hotspots for pickleball players, it has also caught on in Beaufort & the Sea Islands. Over the last three to five years, many private communities have demonstrated an interest/need for dedicated courts and POAs have responded.  Beautiful, new dedicated courts can be found at Beaufort Yacht & Sailing Club, Coosaw Point, Dataw Island (under construction) and Pleasant Point. Fripp Island, Habersham and Islands of Beaufort play on modified tennis courts with portable nets.  As private communities, courts are restricted to residents and their guests.

Four new Dataw courts are expected to be ready in the fall. Members there have formed a club and a Board of Directors with 20+ active players.  “Our vision is to be proactive as we witness the growth and popularity of the sport.  We want to develop a program that fosters a positive playing experience for all members,” said Chuck Schweitzer, President of the Dataw Pickleball Club.

Pleasant Point players worked closely with their POA resulting in the completion of four new dedicated courts this month.  “We are confident more residents will join-in as we showcase the game and new courts to the community.  We could not be any more excited,” said Carl Diiorio of Pleasant Point.

“As a resort community with more vacationers than full time residents, we find that people come out to learn how to play pickleball while visiting Fripp Island. As a result, we often find ourselves introducing people to the sport during our regular round-robin play,” explained Vanessa Penaherrera. She and her husband, Cesar oversee the pickleball program at Fripp Island. They met while playing pickleball 34 years ago. Cesar adds, “we look forward to the possibility of establishing league play in Beaufort & the Sea Islands.”

Meanwhile, there are many pickleball players in the area who seek public places to play.  The Shed, in Port 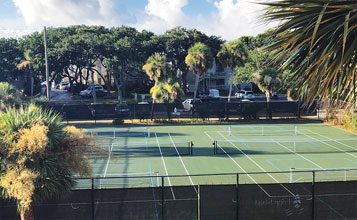 Royal, was an option for a few years, but recently closed due to proposed development plans.  According to Emily Upperman, they have organized their group into the Sea Island Pickleball Club (SIPC), presently in the process of electing a Board of Directors. “Before we had to leave The Shed and before Covid-19, our courts were being utilized by a group of 100 players with play options for three to four times a week.  Now, we have temporary play at Southside Park,” Emily said.  SIPC is looking for an indoor venue to accommodate play in the heat as well as develop a park & rec style program that will include teaching and coaching at all levels of play. Both Emily with SIPC and Mickey Stoble of Habersham report that the lag time in finding a place to play or in the case of Habersham – proposing for more courts – creates the risk of losing player interest.  COVID-19 and the summer heat have added an extra layer of distraction as communities try to calibrate play and court availability.

The Olde Beaufort Golf Club in Royal Pines is in the process of building six dedicated courts that will be open to the public. “We plan to be open for play in late summer / early fall. More information will be coming out soon on their website about rates and membership,” said new owner, Jon Fulmer.

There has been talk at the county level for an 8-12 court complex dedicated to pickleball to be built at the Burton Wells facility. The understanding was that the monies had been allocated over a year ago and then were transferred to other projects.  More good news on that front is expected. The city tennis courts across from the National Cemetery would be a perfect spot to take two tennis courts and change them into 6 pickleball courts. Creating public pickleball space would be an asset and benefit to Beaufort County.

The common denominator among the communities and the public is the idea of having enough players at the same skill level to play against each other so as to embrace the competitive aspect of the sport and as a way to better their own game.  Likewise, ensuring that beginners and novices have a format to learn and play where injuries are minimized and a love of the game is nurtured.

Beaufort High School held their 2ndannual tournament, The Pickled Eagle, in mid March 2020 – the weekend before the COVID-19 pandemic shut down the country. Approximately 80 participants from the general public and local private communities were in attendance. Existing tennis courts were modified by taping to regulation court size and portable nets were used.  Proceeds from that tournament were to support the 2020 boys’ and girls’ tennis season, which subsequently was cancelled. Two visiting players reported finding the tournament on an internet search while looking for “places to play” as they travelled from North Carolina to Florida. Another couple actively travel regionally and look for places to play.

COVID-19 interfered with a tournament scheduled and planned by Coosaw Point for the end of April 2020. Set to be an inaugural tournament on their brand new courts, players from Beaufort & the Sea Islands and throughout South Carolina were to be invited.  Complete with medals, t-shirts and food, Berkshire Hathaway/Bay Street Realty Group was slated to be the Title Sponsor. Proceeds were to go towards upgrading the children’s playground. It would’ve been the first local pickleball tournament to be played on dedicated courts. One of the objectives was to bring local pickleball players together at one venue. “Our goal is to have a fun playing experience with other local players and welcome them to Coosaw Point,” said John Horne, in an unpublished press release.  A new date will be scheduled when it is safe to hold a tournament.

With all this local interest in Pickleball, Dataw player Mike Chambers is interested in bringing the different communities together by developing leagues and tournaments. This could help identify player skill levels and provide a forum for friendly competition among beginner/novice, intermediate, and advanced players.

Pickleball, like beaching and golf, has become a destination activity. Players can search a national database of registered sites to find “a place to play.” The growth of Pickleball is a 21st century reminder of the famous line from a 1989 classic movie Field of Dreams, “If you build it, they will come.” Jeff Conradi reinforces this notion by commenting that “the growth of pickleball is limited only by the number of courts available.”

Jeff also said that, “Latitude Margaritaville Hilton Head is the major sponsor of the US Nationals and US Open pickleball tournaments and advertise in many sports publications. Margaritaville realize the numbers of retiring baby boomers looking for an area to live that promotes an active lifestyle.”

The United States of America Pickleball Association (USAPA) released “Return to Play Guidance” after the shutdown in April. This guidance is designed to be applied in accordance with community mandated rules and recommendations as well as the latest local, state, and federal guidelines related to the containment and prevention of COVID-19.

In the spirit of Southern Hospitality, the interest and momentum of playing pickleball in Beaufort & the Sea Islands has reached a point where various stakeholders could come together to create a forum for introduction, education and opportunity to play – in a friendly, organized culture. 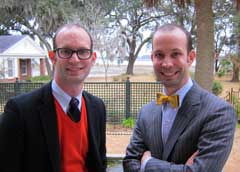 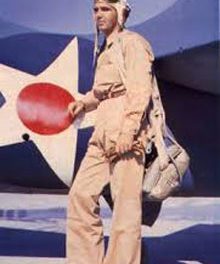