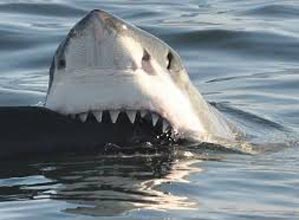 “At lunch they went through three hundred two-foot loaves of bread, 150 gallons of milk, and twelve hundred cups of ice cream. At dinner they dished up fifteen hundred pounds of red meat (except on Sunday, when they served twelve hundred pounds of chicken) and 330 pies. Joe never left a scrap on his plate, or anyone else’s within reach.” (Daniel James Brown, “The Boys In The Boat”; New York: Viking, 2013)

Didn’t think that I was learned in food service, dentistry, or 1936 U.S. Olympic team crewing, did you? Actually I’m really not. The title of this column refers to doing something with great energy and enthusiasm, e.g., “Up tillthenshe’donlyhadsmallpartsin filmsandnothingshecouldgetherteethinto.” Of course society overall and certainly filmgoers seem to prefer actors with actual if often prettied up teeth.

My neighbor Woody’s sweet dog Jenny recently offered me a stuffed duck to inspect, her tail wagging gently. ‘Hey, mister, see what I’ve got. I like to chew on it. Look, it’s a duck!” This reminded me of how we recently caught a once-in-a-blue-moon eel in our minnow trap. I wondered whether these “highly esteemed food fish, particularly in Europe and Japan where they are served smoked, pickled and fried,” according to South Carolina’s Department of Natural Resources, have teeth. Yes, says the U.S. Fish and Wildlife Service. Lots of very small but effective teeth.

As I chewed all this over, I recalled World War II soldiers, airmen and sailors joining up not only to combat terrible enemies but to finally have something decent to eat on a regular basis. The Depression raged on and they were often hungry. The Army focused on the other side of the coin, namely: how well could soldiers eat the food necessary to remain fit for service? Sometimes this meant simply having enough functioning teeth to be able to chew whatever fare was available under miserable field conditions. They published a detailed document that addressed dental standards for military service, calling a fork a fork:

“In time of peace the Army tends to establish physical standards for military service which cannot be maintained in time of emergency. This policy … ensures that time and money will not be wasted in training poor physical specimens, but when these rigid standards are carried over into a general mobilization difficulties may result.” The rubber hit the culinary road during enlistment, when peacetime standards could not be met consistently enough for America to enroll enough new recruits.

Specifically, soldiers acceptable for full duty were initially required to have twelve “serviceable” teeth: at least three masticating, opposing teeth above and below and three incisors above and below, again opposing… so they could actually get enough nourishment to work and fight (more on all the chews that’s fit to print a little later).

Applying these criteria, the Army’s rejection rate was a whopping 8.8%. To get around this problem, the military lowered the bar for dental acceptance, noting that “After Pearl Harbor it was apparent that the manpower needed to fight a global war could be obtained only if dental standards for induction were drastically relaxed.”

The new criteria were straightforward. Men were acceptable for full duty if, “in the opinion of the examining physician, they are well nourished, of good musculature, are free of gross dental infections, and have sufficient teeth (natural or artificial) to subsist on the Army ration.” Or, presumably whatever they were forced to live on in the jungle or if captured. As the Army noted, soldiers “had to be able to masticate any rough food which might be available in the field.” (Anyone care to see the wine list?)

Even these relaxed criteria proved too strict, however, and eventually all dental requirements aside from the absence of advanced and/or incapacitating oral diseases were essentially waived, though dental services were provided.

While the Army traveled on its stomach, back home, military families were hungry for news of their loved ones overseas. They ate up press accounts that gave the latest details and dreaded messengers or telegrams that brought the terrible news of their son’s untimely death or MIA status.

During WWII and long after, Americans got their news from local papers and national magazines; later, from television. Today, news feeds strafe and bombard us. How do people access and hopefully digest news today?

The answers are interesting. According to the American Press Institute, “Americans are accessing the news throughout the day and across devices.” Fascinatingly, those who use more devices (computers, smart phones, etc.) are equally likely to use print publications, TV or radio to get their news compared to those of us with fewer gadgets. And get this: in-depth reading, watching or listening– which really requires sinking those teeth in – occurs pretty much on the same schedule as merely scanning the headlines.

For us Lowcountry Weekly fans, here’s an encouraging nugget –

“People who own and use more devices are no more or less likely to use print publications, television, or radio to access the news. For example, 62 percent of people who use only one internet enabled device say they used the print version of a publication to get news in the last week, [vs.] 60 percent of those who use three or more mobile devices.” So most of us prowl for palatable news during most of our waking hours. We’ve become a nation of news hounds. Chow-hounds, maybe. But TV news is a far bigger source of news than print media, with some exceptions, for example among some seniors.

There are some rubs here. We prefer tasty, solid food but get sucked into distasteful news stories that recycle endlessly (horrible droughts, shark attacks, economic disasters like Greece, prison escapes, you name it). And we keep coming back for seconds! A recent survey found that the average American recalled getting their news from between four and five of eight different types of news sources in the last week (mean = 4.6). Are we gluttons for punishment or what?! The victims of cable and internet tapeworms?

Another rub is that Americans filter their news. According to Gallup data, Democrats, for example, prefer CNN. Republicans lean heavily toward Fox, the network of choice by far for older, more conservative whites. Republicans also prefer to get their news from TV whereas Democrats, especially those with the most education, are the heaviest print users.

We’re always hungry, it seems, and not easily filled up. Maybe that’s a good thing, given the accelerating pace of change and the need to keep up…

Or maybe not. I’m still on the fence. Maybe it’s time to check back in with Jenny, if she can drop that delicious stuffed duck for a minute. Hey, she’s got more than twelve teeth and none of this news business seems to be bothering her one little bit. 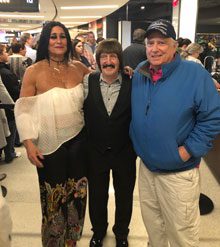 A Knight at the Opera 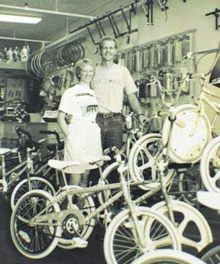