Blow the Men Down

Carla “String Bean” D’Andrea and Sarah “Slingshot” Fiedler wove their way on rubbery legs to Carla’s sprawling condo on King Street in Charleston. The wine they’d had at JJ Foley’s Irish Pub coursed through their bodies. They played kick the can along the way, booting mostly empty bottles and cans of beer up the street. Two of the bottles hit homeless men hunched over in dimly lit doorways.  The women laughed at each strike like cover girl perverts. The old men barely reacted, their mouths cracked open like pecan shells.

They reached Carla’s place at nine-thirty and flopped on one of the living room couches. Giddy and giggling, they took in the dreamy scent of fresh lilies that Carla had parked around her condo. The palms outside her windows sighed in content, their fronds barely moving. Feeling newly confident after months on the street, Sarah asked if Carla had any wine on hand.

“Wine here? Are you serious? My artist friend Joanna Ciampi was a sommelier for a couple years. She helped me fill up the racks over there. Plus there’s some cold stuff in the fridge.”

”You got anything fizzy?” Sarah asked.

“No, like French champagne,” Sarah continued.  “Something from, you know, like wine country.”“Fizzy schmizzy, cutie pie. Aren’t you the chick who got to Foley’s with a grand total of seven bucks in her pocket? Which you owe me, by the way.”

“Get lost, Miss Killer Green Eyed Baby, Madam Man Killer.  Blow ‘em away, right?  Try to take my cash and I’ll kick your ath-a-letic little ole ass.   Hey, by the way, what are we doing tomorrow, and don’t say Macy’s so I don’t look homeless.”

“Yeah, no shopping,” Carla said. “I’ve got a better idea. And in the meantime you can wear my clothes, if you don’t mind looking too classy for a change.”

“Jesus, what a wiseass you can be. Good thing you’re funny, too.”

“That’s me,” answered String Bean. “Here’s the plan. I’ll go to work at Lawton and Chiles as usual and let those stupid lawyer boys drool and trip over themselves. Make a few closer acquaintances, shall we say, with some of my more promising clients. The ones we can blow by.  Mow down.  I’ll ditch the office by seven o’clock. Then we hit Slightly North of Broad for a quick bite.  Their beet salads are the best.”

“Then we go gun shopping,” said Carla. “I’ve got my Glock and ammo here, but you need something besides that right hook and sharp elbow of yours. Thanks for demonstrating that to me on the way over here, by the way.  I’m just glad you pulled your punches.”

After Carla left for work the next morning, Sarah browsed her phone for something interesting to read with her coffee and slight hangover.  She found a fascinating essay by John F. Harris in Politico.  “Ambition and anxiety both gnaw at him constantly,” the columnist Walter Lippmann wrote of President Herbert Hoover to Felix Frankfurter, a law professor and later a Supreme Court justice, as Hoover flailed during the Depression.“He has no resiliency. And if things continue to break badly for him, I think the chances are against his being able to avoid a breakdown. When men of his temperament get to his age without ever having had real opposition, and then meet it in its most dramatic form, it’s quite dangerous.”

Sarah read Harris’s words over again. She sensed an angle, a strategy that she and Carla could use to make some cash. Serious cash. Guns or no guns, this guy Harris might have helped light the way for them.  Target Carla’s older and wealthier clients, the ones who began by gliding through school on family money or easy scholarships. She pondered the so-called “Hooverville’s” of the time shortly before FDR was elected president in 1932, when unemployment hit 25% and men stooped like stone soldiers in bread lines, bolstered by cigarettes, the glow of dawn, and hopes for their families built largely on Roosevelt’s unsinkable optimism and that famous grin.  She thought of her own unlikely president flailing away at the coronavirus, bragging, telling endless lies, and fighting Democrat governors along the way (“I give myself a ten. We’re doing a fantastic job.”)  Held up by the doctors on his task force, a giant orange cotton candy capped wad of faux bravura.

She thought of some of the guys in the back of Foley’s, smug and complacent. She thought of her uncle Bert and her former lover Derek.  The fat targets you knock down with a softball for a buck at traveling carnivals. The bozos, buffoons and braggarts.

Carla got home from work looking like an Olympic swimmer dressed for a Vogue spread, her electric green eyes seeming to sear holes in the drapes. Sarah had seen only seen two women in her life with such eyes, a lady their age walking her dog in Boston a couple years ago and, coincidentally, a five foot eleven professional dog walker named Katy Palmer with fluorescent blue eyes.  Sweet Jesus, Sarah wondered, how in heaven does that happen to a human being?  Is it a blessing or a distracting curse?  Probably a blessing, but a pretty weird one.  Maybe like being double jointed or having six fingers.  Or being able to sing five octaves like Mariah Carey.

“Ok, Slingshot, let’s hit SNOB and no wine tonight.  We need to be sharp.  Beet salads and maybe some halibut but no alcohol. A few carbs and sparkling water, Miss Fizzypants. You got it?”

“Yeah, Beanie, I got it,” Sarah spat back. They were bonding the old fashioned way, tossing nicknames at each other like kids did during the Depression. Scooter, Buzzy, Mickey, Droopy, Sidewinder.

They left the restaurant and headed toward Mount Pleasant in Carla’s green Ferrari. Don Lopez waited for them on his back porch, smoking the foulest pierogi cigars the south had ever endured.  He still had his sleek aviator sunglasses on though it was getting dark.  He swung his boots down off the railing. “Good evening ladies, how nice of you to visit me here in the sticks.”

“What, no bazookas or flamethrowers?” Don chuckled.

“Shut the hell up, Lopez,” Carla said. Just bring out what you’ve got and don’t jerk us around.  Comprendes, señor ?”

“Have a seat, señoritas. Relax, relájese. I’ll be right back.”

His cat Chico stayed on the railing and hissed at them. 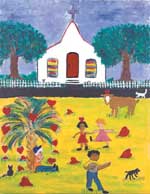