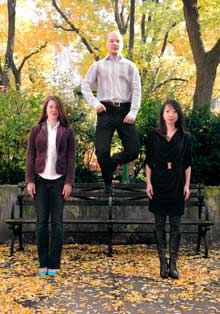 Every once in a long while, a musical performance is so stunning that it demands not only an immediate encore, on-the-spot, but also an invitation for a return engagement. Fripp Friends of Music, which has been painstaking in selecting performing groups and soloists who appeal to Lowcountry audiences, found a just such a treasure in ETA3, when the group made its Fripp debut in 2010.

ETA3 was so warmly received and garnered such high accolades for its virtuosity, right away, Friends of Music planned to have them back—soon.

ETA3 is, of course, more than the sum of its artists, but the group’s wonderful musicianship is due, well—to its talented musicians! Flutist Chelsea Knox earned her Bachelor’s and Master’s degrees at The Juilliard School of Music. She is an advocate of “New” music and a member of the New Juilliard Ensemble and “Juilliard Plays Juilliard.” Chelsea has performed solo recitals in Connecticut and New York as well as concertos with The Hartford Symphony, Juilliard Lab Orchestra, Connecticut Youth Symphony and Manchester Symphony. Chelsea has won first prizes in numerous prestigious competitions.

Alexey Gorokholinsky is a native of Russia, who began his clarinet studies at age 7. Alexey came to the United States at age 15 to attend the Idyllwild Arts Academy in California and then Juilliard on a full scholarship—during his freshman year he won The Juilliard Clarinet Concerto Competition! He went on to earn Bachelor’s and Master’s degrees at the school. His latest CD, “Delicacies,” showcases his virtuosity, featuring a variety of melodic pieces with his original arrangements for clarinet and piano.

Praised for her “superior technical facility and musicianship,” Tomoko Nakayama has recently performed, with the New York Philharmonic Ensembles, at Merkin Concert Hall in New York and at the Tanglewood Music Festival. Tomoko is a member of the Chamber Orchestra of New York, playing both piano and celesta. A native of Japan, Tomoko holds a Bachelor of Music degree in harpsichord and a Master of Music degree in Collaborative Piano, both from Juilliard.

Fripp Friends of Music invites you to enjoy the delightful chamber music of ETA3, Sunday, November 17th at 5 pm at the Fripp Island Community Centre, 205 Tarpon Blvd. Fripp Island SC, 29920. Tickets at the door: Adults $25 per person/$10 for students. All attendees receive a free entry pass at the Fripp Gate and are invited to join the artists at an included catered event following the performance. Information (843) 838-6655. www.islc.net/friendsofmusic/

“Fa LaLaLaLa” into the Season!