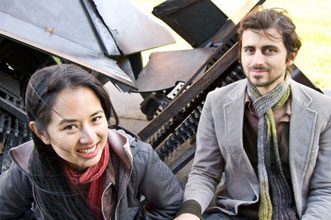 Well, Dana and Kyle, a fiddle and guitar duo, are actually from New York. However, they will bring to the Beaufort community what has been hailed as Ã¢ground-breakingÃ¢ Irish music. That might be considered redundant, ground-breaking Irish music, but the duo’s performances are creative, riveting and heart-warming.

Dana Lyn and Kyle Sanna have been enchanting audiences worldwide, both with their concerts and their recordings. Just this year, they have been touring from New York to Denali National Park in Alaska, and from Toronto to Havana. They have accompanied the greatest interpreters of Irish music like Martin Hayes, Grammy-winning singer Susan McKeowan and Kevin Burke. They are both composers and arrangers, thus their music, while steeped in the Irish tradition, fans out into all sorts of genres, and their inventive arrangements and nuanced interpretations of familiar Irish tunes elevate them into magical realms.

For the nature fans among you, Dana and Kyle’s latest album,The Great Arc, is inspired by their concern for extinct and endangered species, and each song is dedicated to an animal such as the Yangtze Finless Porpoise or Stegasaurus. The Irish Echo called the collection “a deep musical work full of lavish, evocative textures,” and Susan McKeown described it as Ã¢sublime”.Â

“Lyn and Sanna challenge our expectations and assumptions about Irish music [and] invite us to consider our perceptions of the natural world and how attuned we are to its rhythms and phrases – and what it means when a voice in its grand chorus is no longer heard.” So writes Sean Smith, a Boston Irish Reporter.

Dana Lyn, fiddler and pianist, composer, arranger and producer, has worked and performed with celebrities such as vocalist Loudon Wainwright, actor-director Ethan Hawk, musicians Sting and Bruce Springsteen. She has received commissions from the Brooklyn Rider, the National Arts Council of Ireland and the New Orchestra of Washington. Upcoming releases include an album of original music with her quintet, Mother Octopus, a spoken-word collaboration with the actor Vincent D’Onofrio and an album of traditional music arranged for string quintet, featuring the Apple Hill String Quartet. She was a major player in The Raw Bar and Geanntrai, two documentaries about traditional Irish music that aired on national television in Ireland.

Kyle Sanna has composed for and collaborated with many of today’s greatest virtuosi like cellist Yo-Yo Ma, arranged music for orchestra and soloist like for banjo pioneer Bela Fleck and cellist Jan Vogler, played with some of the greatest living interpreters of Irish music like Seamus Egan and with many members of New York’s improvised music scene. His music has been performed at such international venues as the Bach Haus in Eisenach, Germany, the Royal Opera House in Muscat, Oman, Sydney’s ABC studios, New York’s Carnegie Hall.

On Sunday, October 15, at 5:00 pm, Dana and Kyle will start the 34th concert season of the Fripp Island Friends of MusicÂ  (FIFOM) at the Community Centre, 205 Tarpon Boulevard. Tickets at the door: adults $25, students free, thanks to the Peg Gorham Memorial Fund. You get a free pass at the Fripp gate and are invited to join the musicians at a catered reception after the performance. You might want to purchase a season ticket for $100 and attend all five concerts. For more information, visit www.frippfriendsofmusic.com or call 843-838-1777.

P.S. As always, on Monday after the concert, the musicians will visit Beaufort schools to entertain and teach the students. And FIFOM will use part of the proceeds from the concert to support young musicians in Beaufort. 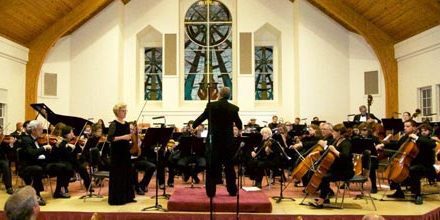