In an interview during the South by Southwest Film Festival, Kamp Katrina director David Redmon stated that he almost got kicked out of Kamp Katrina for refusing to take sides during heated situations between the Kamp residents and property owners.

Redmon and his co-director, Ashley Sabin, made a conscious decision to create a documentary that is as impartial as possible. They edited out scenes that either diverted focus from the camp or portrayed them as characters. Redmon had reasons for remaining neutral while being fully aware of ethical ramifications of being impartial in the post-Katrina situation. Kamp Katrina is a story of hope, community, generosity, rebirth, and failure. It is neither a fairy tale nor a parable of things to come, but an unflinching descent into the atmosphere of abandonment that still gripped large areas of New Orleans more than a year after the storm.
The film Kamp Katrina follows New Orleans Upper 9th Ward resident, Ms. Pearl and her attempt to open up her backyard to give shelter to t hose who lost their homes in the wake of Hurricane Katrina. Only a month after the storm, she heard a community organizer urging residents to open their homes to the displaced. The warm-hearted Ms. Pearl enthusiastically offers her backyard and soon ten people move into “Kamp Katrina.”
Ms. Pearl and her husband attempted to provide resources and paid construction jobs for residents of Kamp Katrina. However, they are forced to deal with the realities of post-Katrina New Orleans – a dysfunctional economy and a often hostile bureaucratic system.  Soon the small space of their backyard becomes a problem as stress, drugs and alcohol lead to bad, sometimes violent, behavior. Filmmaker David Redmon founded Carnivalesque Films, a documentary production company currently located in Mansfield, Texas in 2004, with a goal to explore how personal stories relate to complex social issues.
Opening Short: Tour of Homes, directed by Penny Brice
Once described as the southern belle with a dirty face, Savannah is a city of contradictions, primarily between the haves and have-nots. With its Spanish Moss-draped trees and genteel historic district, it has a dark underbelly of poverty and crime, sustained by racial inequality and fueled by denial. Tour of Homes provides an alternative tour to the ones that cart tourists through the affluent environment of historic downtown Savannah.
Southern Circuit’s Kamp Katrina, Friday, March 14th at 7:30pm, $7. At the Arts Council of Beaufort County, 1111 Boundary St., uptown Beaufort. 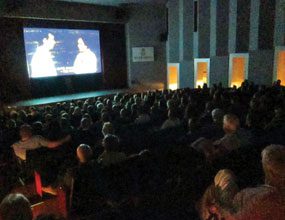