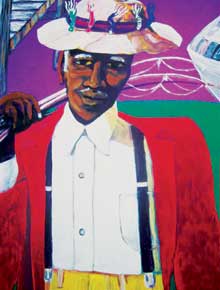 Red Piano Too to host tribute to Charles Desaussure

When great trees fall,
rocks on distant hills shudder,
lions hunker down
in tall grasses,
and even elephants
lumber after safety.

A great tree recently fell in the world of Lowcountry art. Artist Charles Desaussure died in the Charleston Veterans Hospital on July 16, 2013. Charles had been an artist at the Red Piano Too Art Gallery for twenty years.

This year the gallery is dedicating the 20th Annual August Summer Show on August 3, 2013 to the memory of Charles Desaussure. Charles attended every year. He always took up residence on the front porch of the gallery setting up his paints, easels, and supplies. Charles loved people, especially young people. He encouraged them to paint as they gathered around to watch him work. He often supplied them materials so they could draw too. He encouraged them by saying, “Go where the spirit leads you.”

Becky Kiester, gallery staff, recalls how Charles loved Charmaine Inabinett’s Pistachio Cake, which she sells on the porch during shows. It is a gallery memory that Charmaine had to make Charles his own cake ; that way, he could have some whenever he wanted and didn’t have to constantly send a child to get him another piece of cake. While reflecting on Charles and his life, gallery friends remembered his vintage navy blue Mercedes. He loved that car! As he would chill at the gallery he would often take time to give the car a wipe so it looked just as good going to Charleston as it did coming to St. Helena.

Charles, an Air Force veteran, had an easy and open manner. People immediately liked him and wanted to get to know him better. He enjoyed “just chillin’ and meetin’ the folk” as he relaxed on the swing at the gallery. Born in Yemassee, South Carolina, his family moved to President Street in Charleston, where he grew up. Early on, Charles was interested in art, the world around him was rich in Gullah culture. The urban influence was emerging in his work with paintings of juke joints, musicians, street vendors, sweetgrass gathering, and sweetgrass basket sewers chatting happily in the Charleston market. Almost every painting Charles created in the beginning had the old Cooper River Bridge in the background. He shared memories of playing under the bridge as a boy – marbles, basketball, bike riding, skateboarding, and chasing the little girls with fiddler crabs. In addition to work on canvas and paper, Charles was a skilled sign painter and muralist. His signs and murals are on many buildings throughout the Lowcountry and Washington DC. He painted the signs on the Red Piano Too building. “Ravenel Seafood” on US 17 in Ravenel, South Carolina boasts a mural by Charles. Charles was working on a sign for a business on King Street in Charleston when he became ill, went to the hospital and died.

Charles was very proud of the logo he designed for the US Naval Clinic in Charleston. He received special recognition at the dedication. More recently he was chosen to create the art for the 2013 Charleston Moja Festival held in Charleston.

Charles’ art is in collections all over the world. South Carolina artist Jonathan Green owns work by Charles. Rolling Stone guitarist, Keith Richards owns WEST 59th STREET, a painting of a musician that captures the essence of the urban jazz scene.

This man, Charles Desaussure was very dear to the Red Piano Too as a friend and as a great talent in the world of the self-taught Southern artist. He will be missed greatly. He will be missed by his family, his friends, his collectors. His extended family at the Red Piano Too will never forget him.
The Red Piano Too August Summer Show will be held on Saturday, August 3, 2013 from 10am to 5pm. The tribute is free and open to the public. The gallery has created a display of works by Charles. Please join us as we celebrate our friend and fellow artist. 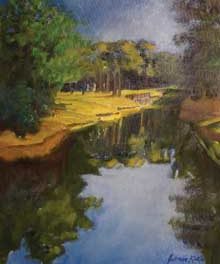 Songs of Awe and Wonder 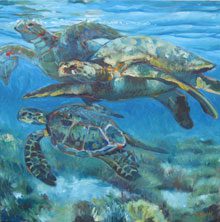 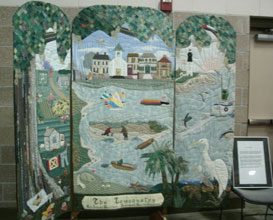 The Lowcountry Quilt at City Hall