The Society of Bluffton Artists (SoBA) announced the winners of its annual competition at an opening reception Sunday, March 17th.  The Show at the SoBA Gallery on Boundary Street in Old Town Bluffton, runs through April 18, 2009. The winners are:

Second Place:  "Where Am I?" a mixed media/collage painting by Lark Smith

Honorable mentions were awarded to:

"The Farm Stand” by Don Nelson in photography

"Window to the Soul" a mixed media painting by Art Cornell

Holly McCullough, Chief Curator, Fine Arts and Exhibitions at Savannah’s Telfair Museum of Art, who served as judge said this year’s show is “…further confirmation that our region is blessed with an abundance of artists working in a wide variety of media and styles.”  Ms. McCullough was impressed by the diversity of the exhibition and that diversity is certainly represented in the various mediums winning awards.
The medium represented in Best of Show winner “Savannah Cargo,” Diane Dean’s work, is encaustic, also known as hot wax painting which involves using heated beeswax to which colored pigments are added.  Because wax is used as the pigment binder, encaustics can be sculpted to reveal a textured surface.  Artist Dean has collaged images of container ships in the Savannah River under the wax surfaces in this three-painting composition creating an atmospheric view of commerce from Savannah’s River Street.  Encaustic technique was notably used in the Egyptian mummy portraits between 100-300 AD, and in other early icons.    Encaustic painting was also a technique of ancient Greek shipbuilders, who used hot wax to fill the cracks in their ships. Soon pigment (color) was added and this led to painting on the surface of the waxed hull: an art form was born.  Though artist Dean’s paintings likely won’t embellish any crypts or ships in the near future, visitors to the SoBA Gallery can enjoy this ancient art form in the comfort of a stylish, air conditioned exhibition space.
Ted Jordan’s drawing, “Princetta’s Prayer”, is a fine example this talented artist’s diverse abilities.  It is a simple, yet complex image depicting innocence and hope.
“Where Am I?”, Lark Smith’s worldly, complex mixed media/collage is filled with inviting, surreal and ethereal images. Her use of lines, color and texture enhance the interest and bode the title’s question.
Oil painter Judy McElynn’s “Marsh in Bloom” is rich and soothing.  She has captured the atmosphere of a Lowcountry marsh and delivered a gem all will enjoy.
Along with the winners and honorable mentioned artists’ work, over 90 paintings and sculpture complete the exhibit and the public is invited to vote for their favorite artwork.
The SoBA Gallery is located on Boundary Street in old Bluffton and is open Mon. through Sat. from 10-5.  Call 843-757-6586 or visit the SoBA web site at www.sobagalleries.com for more information about the organization and participating artists. 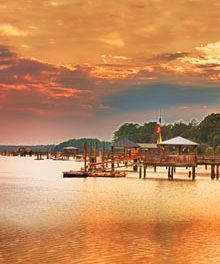 Out of the Box in Photoshop 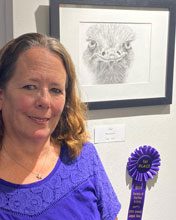 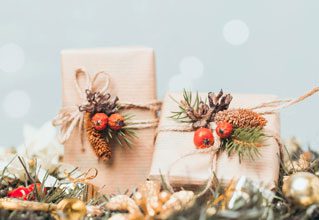 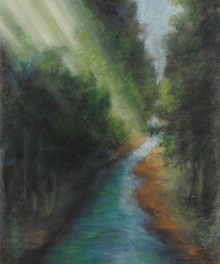