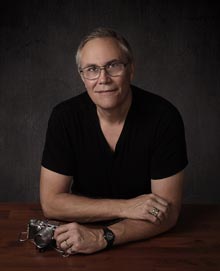 When I offered to do a story about local photographer Eric Smith, I had no idea what I was getting myself into. I owed Eric a favor – he’s been very generous with us here at Lowcountry Weekly – and he’d mentioned he had an upcoming exhibit at the USCB Gallery. Maybe I could help him promote it? The conversation started casually, almost a year ago, when neither of us knew exactly what that exhibit would be. All we had was a date: April 3, 2015.

Fast-forward to last month. I run into Eric at the Old Bull Tavern – it’s Mardi Gras eve – where he snaps a very nice, semi-candid picture of me. (Translation: I saw it coming, but didn’t have time to ruin it by posing.) I rarely like my “party pics” that show up on Facebook from time to time, but I liked this. It made me look serious . . . like a “person of substance” . . . not just some middle-aged sorority girl clutching a glass of wine for dear life, as per usual. Eric showed me the picture right there on the spot, as I was leaving the bar. He reminded me that the USCB show was coming up, and said he planned to feature some new portrait techniques he’d been working on.

“Why don’t you come by the studio and let me shoot your portrait,” he said. “You can 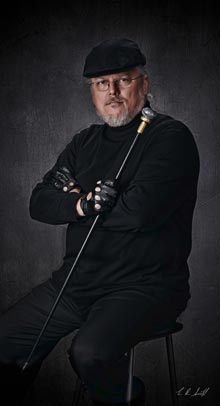 write about the experience for the article.”

A great idea, right? Any arts journalist worth her salt would jump at the chance to get the inside story on fine art portrait photography by participating in the process herself. It was a no-brainer.

Except this wasn’t just any arts journalist. This was yours truly. I immediately began thinking up excuses not to do it.

I have a rare phobia, you see. I’m not sure it’s been recognized by the National Psychiatric Association, but it’s very real to me. I call it Focus-phobia. I fear being the “focus.” I don’t like being looked at closely, examined, scrutinized, or anything of that nature. I dislike it so intensely, in fact, that I can’t even enjoy the kind of pampering most women adore. I don’t get pedicures, manicures, facials or massages. I don’t like having my hair done, can’t stand being “helped” when I’m shopping for clothes, and don’t even get me started on doctor and dentist appointments. Shudder. Too much focus.

I know, I know . . . It makes no sense. Especially for a woman who spends much of her professional life writing in the first person. But somehow, that feels different. With my writing, I have a measure of control; I show you only what I want you to see. (“Writing is both mask and unveiling.” – E.B. White). But there’s something about presenting myself for physical inspection that has always mortified me. I’d like to believe it’s modesty or humility or some such admirable quality, but I suspect it’s closer to the opposite: pride. I fear being truly “seen,” because to be truly seen is to be judged and found wanting. To be truly seen is to run the risk of not being loved.

But I had made a promise, and by golly, I try not to break those. Much. So I decided to get over myself, put on my big girl pants, and just get my dang portrait made. How bad could it be, anyway? I’d just show up, do whatever Eric told me to, try to go to my “happy place” in my head, then put the whole thing behind me. I wouldn’t worry about the finished product. (Maybe I’d never even have to see it!) It would be an adventure. I’d be helping Eric and facing my fear. Two birds, one stone.

And so I did it. And you know what? Like so many irrational fears we humans harbor, the reality was not only “not so bad,” it was actually good. Very good, in fact.

Slowly, surely, Eric put me at ease and drew me out; chatting, joking, asking questions, encouraging me.

As he snapped away, he’d show me the results from time to time. “Look at this. And you said you couldn’t take a good picture? You’re a natural! Okay, let’s just go ahead and shoot black and white now . . . that’s obviously where this thing wants to go . . . ”

In the course of half an hour, I went from awkward, reticent subject to brazen collaborator.

“Should I try this?” I’d ask. “How ‘bout this? Maybe I should put on my vest? Or my glasses!” Nervous Nellie was suddenly channeling Claudia Schiffer. 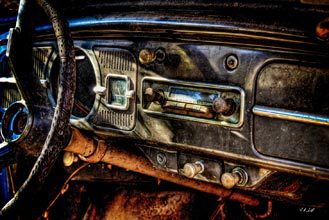 By the time we were finished, I kind of didn’t want to leave. I was having too much fun.

Susan Smith, Eric’s wife and business partner, assures me I’m not the first woman to enter their establishment – Captured Moments Photography at 509 Adventure Street – with fear and self-loathing in her heart, only to leave in a fabulous mood. “Most women over 40, especially, would rather go to the dentist than have a professional photograph taken,” she says.

Eric concurs. “So many women show up, saying, ‘I always look terrible in photos. I’ve never taken a good one in my life.’ I tell them they just haven’t met the right photographer.”

“It’s true,” says Susan. “Everybody is capable of taking a good picture. Everybody is beautiful in some particular way. Eric happens to be terrific at finding that beauty. In fact, his greatest strength as a portrait artist is his ability to engage with the subjects, relax them, and really capture their personality through lighting and posing. A turn of the head here, or a tweak there, results in the perfect portrait. ”

Much of this ‘turning and tweaking’ know-how is the kind that only comes with experience. Eric has been working as a professional photographer for over 30 years. But having relocated to Beaufort from Maryland a few years ago, he now finds himself re-inspired, falling in love with his vocation all over again.

“Beaufort is truly a photographer’s dream,” he tells me. “It has reignited my interest in all forms of photography. It is no longer a job but an adventure: sunrises and sunsets, shrimpboats, small town life, and water, water everywhere.”

And though Eric has shot plenty of portraits over the past three decades, the upcoming exhibit at USCB has challenged him to spread his wings in that department, too. He’s experimenting with a new approach to portraiture – doing what he calls “heritage portraits.”

“It’s more an artist’s approach to a subject than a photographer’s,” he says. “It’s about capturing an iconic image that will stand the test of time. The final effect of the portrait is created after the fact in the computer, through retouching techniques and changing the background to match a particular mood I’m going after. Not so much ‘beauty retouching’ as ‘personality retouching.’ This is a more creatively intensive project.”

Eric Smith is not one of those photographers who’ll proudly proclaim, “I never use Photoshop!” or “I never crop my pictures!” or what have you. As far as he’s concerned, technology is technology – starting with the camera, itself – and it’s part of his job to stay on top of it.

“The technology is moving so quickly,” he says. “Not too long ago, there were all 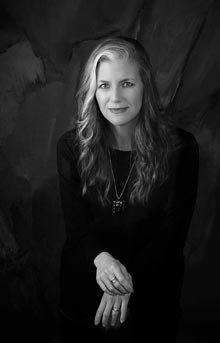 these photographers bragging about the fact that they never shot digital. They only used film. Well now, you can hardly even buy film.”

“We’ll use any tool in the toolbox in pursuit of a great picture,” says Susan, who handles marketing and customer service for Captured Moments, a full-service photography studio specializing in family portraits. “Why would we limit ourselves?”

The Smiths believe that people want to look like themselves in their portraits . . . only better. “You want to see your best self. Your self after a really good night’s sleep,” says Susan.

I gave them permission – nay, encouraged them – to plunder the ol’ toolbox when creating my portrait. I have no shame. (And, as I mentioned before, I do have pride.) My only request? “Don’t make me look haggard, but don’t make me look too young, either. I want to recognize myself.”

When I stopped by the studio a few days later to check out my proofs, Susan and Eric had already chosen the image they wanted to use in the exhibit. (They were using my image in the exhibit? Yikes!) Eric had worked his magic, and there was my heritage portrait staring back at me from his computer screen. It was me, but not me. Me, but more so. It was the ageless, timeless me. The iconic me. I loved it.

I felt suddenly shy and had to look away. It was as if I’d been seen. Truly seen. My Focus-phobia was flaring up again . . .

We moved on to some other portraits from the exhibit – big relief! – as Eric 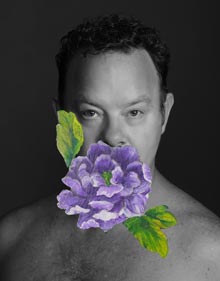 discussed the show. There was Mary Ellen Thompson, looking gorgeous, and Marilee Sartori – ditto – and there was my pal Brad Ballington, handsome and mysterious in black and white, with a large purple flower painted over his mouth. This was starting to get seriously interesting . . .

So, here’s the scoop: The USCB exhibit is called ‘Pixels to Pigment: a provocative perspective from the camera to the canvas.’ Along with the heritage portraits and other fine art photographs of Eric Smith, it will feature original paintings by Dusty Connor. There will be some collaborative works, as well, in which Dusty reinterprets Eric’s photographs by painting directly on the photo, changing the whole mood of the original image. (See Brad with Purple Flower, left.) ‘Pixels to Pigment’ runs from April 3rd through May. Come join Eric and Susan, Dusty and Brad, and lots of other fun-loving folks – yes, I’ll be there, too, along with my portrait – for the opening reception at the USCB Center for the Arts on Friday, April 3rd at 5:30 pm.

Or call Captured Moments at 379-0223 to set up your photo session with Eric. You know you want to.

Margaret Evans is the editor of Lowcountry Weekly. Read her regular column here or visit her blog at www.memargaret.com

Art for Your Sweetheart 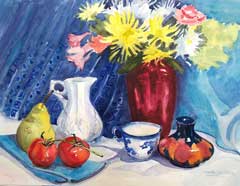 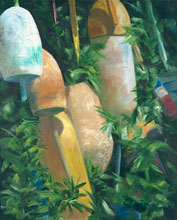 From Maui to Maine & Back to the Lowcountry