On Matthew, Conroy, and Other Forces of Nature 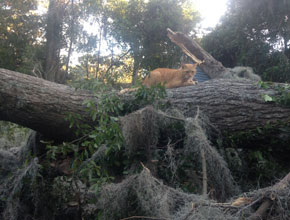 For this issue, I had planned to write about A Lowcountry Heart, the wondrous new collection of essays by the late Pat Conroy. (After almost six months, that phrase still looks outrageous to me in print. “The late Pat Conroy.” Every fiber of my being resists that sequence of words.)

This compilation of never-before-published letters, speeches, journal entries and blog musings is making its debut this weekend at the inaugural Pat Conroy Literary Festival here in Beaufort, and it seemed like a natural column topic.

But then came Matthew. And our escape to Alabama. And the neighbor’s giant water oak that crash-landed in our backyard, taking our shed and our deck and a corner of our roof down with it. Oh, how the earth must have trembled when it fell. How the sound must have split the air, even in the roar of that furious storm. How glad I am we weren’t here to feel the thud in our bones. Had that moss-bearded behemoth landed a few feet from where it did, our little house in Pigeon Point would now be history. Had we decided to stay instead of go, one (or more) of us might be history, too.

I have lots of friends who did stay. Riders on the storm. What can I say? I gravitate toward ornery rebels. I’m not sure whose Matthew Experience was more harrowing – theirs or mine.

I jest. They win. But that late Friday night/early Saturday morning was no picnic for me, either, as I lay in bed beside a peacefully slumbering husband – traitor! – glued to my smart phone, reeling between weariness, worry, agitation and deep panic. Facebook allowed (forced?) me to weather the storm vicariously through my crazy-reckless-brave-bodacious friends and neighbors who, for various reasons – which I am not judging! – decided to stick around and stick it out.

I couldn’t look away from my phone and I sure couldn’t sleep. Hundreds of miles from Beaufort, safe and sound in my parents’ house on the banks of the Tennessee River, I wanted to be with my Lowcountry storm riders. I needed to be. I couldn’t let them go through it alone. A hurricane? Certainly not!

So I careened around Facebook, from timeline to timeline to timeline. I read about how loud it was out there. Some said the storm “screamed” and “screeched.” Others said it was more like a freight train right on top of them. I knew it when the power went out for most folks. (Around 4:30 am, I think?) Heard about the “green flashes” as transformers exploded. One friend described the water rising up the front steps of her house, where she was hunkered down with her aging parents, and into her backyard from the marsh. “We are completely surrounded,” she wrote, “and it’s still rising.” My heart stopped in my chest. “It’s getting really scary out there,” wrote another friend. “I am totally freaking out,” wrote another.

So was I. Totally. And still my husband slept.

The next day was a tragi-comedy of errors for us exiles in Alabama. A friend texted me a couple of pics of our house around 9 am, taken from the street. “Your neighborhood’s a mess, but your house looks good. I can’t see any structural damage,” she wrote. (Or something like that. I’m paraphrasing like crazy.) Whew! What a relief. My sister, also a refugee, got similar news about her house in Charleston, and now we could enjoy our family reunion! My storm-riding friends were safe, our houses were sound, and the worst was over. Time to get this party started!

A couple of hours later, another friend texted to say our neighbor’s tree had fallen across our backyard, and looked like it had “clipped the corner” of our roof. Well, okay. This was worse than our original report, but still not so bad. Our friend hadn’t gotten a very good picture – said she couldn’t get into our yard with that tree – and the one she sent looked fairly tame. Just a bit of gutter hanging off the roof, it seemed. We continued to count ourselves lucky.

But later that afternoon, our Lowcountry Weekly colleague Amanda and her husband Scott – a police officer who knows how to climb around natural disaster areas and not die – sent us photographs that revealed a much more serious situation. The most gargantuan tree you can possibly imagine was sprawled across our backyard – filling it up in every direction – completely crushing our deck and our shed. (Actually, “shed” isn’t quite the right word. It’s a nice outbuilding – with power and a window and even a cute window box – that’s painted and trimmed like a miniature version of our house. It was all that, anyway. Now it’s mostly rubble.) 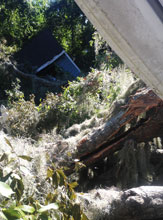 of days later… the one I see through my kitchen window right now, as I sit banging away at this essay. By the time you read it, the insurance adjustor will have been here and, hopefully, the tree service I called a week ago, but for now – and for quite awhile, I suspect – this is the new normal here at Crumpleton Manor. (That’s the nickname we gave our little “estate” many moons ago. Never before has it seemed so apropos.) One look out our kitchen window, and you think you’re in one of those futuristic/dystopian YA novels – the Hunger Games or Divergent or something. It’s eerie and strangely dazzling.

My husband and daughter would probably disagree with the “dazzling” part, but for me, there is something breathtaking – something bordering on beautiful – about this fallen tree that demolished our backyard. The breadth of it. The awesome girth of its limbs. The sheer power of its weight. Sometimes I just stand in the kitchen doorway and stare at what has come to pass . . . and marvel. I hate to resort to such a worn cliché, but being face to face with this “force of nature” every day is humbling and oddly exhilarating.

Which is pretty much how I feel about our “frenemy” Matthew in general. That rude rascal blew through our town with such merciless abandon – absolutely no regard for our safety or our property or our peace of mind. He frightened us, inconvenienced us, endangered us, and broke our stuff. He took my beloved back deck, where I watched my birds and drank my chardonnay.

But Matthew also gave us neighbors we didn’t know before. And friends who were once strangers. And board games with our kids by candlelight. He gave us patience and gratitude and generosity . . . and he even gave a few of us a chance to be heroes. Matthew gave me strength I didn’t have before. Strength enough to look out my kitchen window and not cry. Strength enough, even, to laugh.

I’m not one of those folks who goes around saying, “Everything happens for a reason.” Maybe everything does, but I don’t know that, so I don’t go around saying it. All I know right now is that this hurricane and its aftermath – The AfterMatthew, I call it – has not been all bad. In fact, in many ways, it has been a gift. And I am, in a peculiar sense, thankful for it.

One last thing, which brings me back to the first thing. It has not been lost on me that the only hurricane to hit Beaufort in almost 60 years came as prelude to the inaugural Pat Conroy Literary Festival. I’m still trying to figure out what that means. Maybe nothing to you. But the man was a force of nature, himself – with whirling windstorms and crashing water oaks in his blood – and the confluence of these events, to me, seems somehow perfectly poetic.

And so very Conroy.

The Pat Conroy Literary Festival takes place October 20 – 23 at the USCB Center for the Arts and throughout Beaufort County. For more information, visit www.patconroyfestival.com

Margaret Evans is the editor of Lowcountry Weekly. (Read more of her Rants & Raves here here or visit her blog at www.memargaret.com)

On Fame and Fortune (and everything that goes with it…)