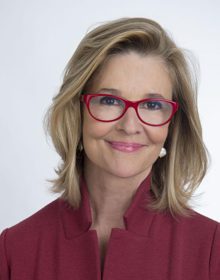 A conversation with Pulitzer Prize-winning

Calling myself a Kathleen Parker “fan” would be like calling my teenage daughter a Harry Potter fan – a gross understatement. Though I seldom curl up on rainy days with a pile of old Parker columns – a la Amelia with old Potter movies – Kathleen has topped my short list of must-read columnists for as long as I can remember. Smart, witty, fearless, southern. Slightly right of center, except when she’s not. Vexing Republicans as often as she does Democrats. Maybe a little ornery.

She’s not just a role model; she’s my spirit animal.

Kathleen Parker will be in Beaufort the first weekend in November for the third annual Pat Conroy Literary Festival. She’ll be giving the keynote address at the Friday night dinner party celebrating Our Prince of Scribes: Writers Remember Pat Conroy, where she’ll be joined by at least 20 other contributors to that collection, including yours truly. (Translation: I get to meet her in person… and you can, too!)

In anticipation of that blessed occasion, I had the pleasure of interviewing this Pulitzer Prize-winning Washington Post columnist via email…

Margaret Evans: Kathleen, in Our Prince of Scribes, you give a delightful description of your first meeting with Pat Conroy in a Florida hotel, but it’s clear that you were a fan of his writing before that chance encounter. I’m wondering: Was Pat also a fan of yours? His politics were well-known, but he always respected a carefully considered position . . .  and he loved a well-turned phrase.

Kathleen Parker: Apparently, so. He often commented on my columns via email. He was a fan of common sense and rational argumentation. I was always flattered by his taking note.

ME: How did you and Pat maintain your friendship after that first meet-up? Letters? Cryptic emails (as his always were!)? Were you one of his many late-night phone pals?

KP: I was not a phone pal except by extension. Pat called (prize-winning political cartoonist) Doug Marlette every morning, after which Doug called me. He would recount his hour-long conversation with Pat and then we’d commence on our discussion of the daily headlines. I kept up with Pat and the literary world largely through these conversations. I guess you’d say we had a three-way, daily conversation for five years — the length of time I knew Doug before he was killed.

ME: I vividly remember when that happened, the tragic car accident, and how devastated Pat was. I know you were too, and you’ve written about it beautifully in Our Prince of Scribes. Your son, John Connor Cleveland, has a lovely piece in the collection, as well, about Pat’s mentoring him as a writer. I see that the piece was first published in the Weekly Standard and I’ve read a few of his columns in National Review. Sounds like he may be following in his mother’s footsteps as a political commentator. As a fellow columnist – and fellow mom – I think I’d have mixed emotions about that. How about you?

KP: My son is a far better writer than I was at his age. He began writing seriously at age nine. I recently found a short story he wrote at that age and it was shockingly good. Although he’s a lawyer and works in politics, he still writes for publications occasionally. I think he’d be a happy journalist, but I’d never urge him in that direction. As Pat once remarked about fiction writing, journalism isn’t something you like to do; it’s something you have to do.

ME: As someone who scrambles to write one column every two weeks – I like to blame it on my other editorial duties and my unfortunate Facebook habit – I marvel at your ability to crank out two terrific columns per week. Tell me a bit about your process. How do you choose your topics? (Or do they choose you?) How much time do you spend reading news everyday?

KP: I like the notion that topics choose me, but I sort of slave over ideas. Or, rather, I’m constantly vigilant for ideas that bestir me. Obviously, I read a lot, watch news a lot, but mainly, I pay attention to everything. I listen and watch, ever alert to shifts in the tectonic plates of culture and politics. When I first began writing a column, I figured I could do it for about a year. Thirty years later, writing twice a week, I’m sort of amazed by the output.

ME: Me too. And speaking of the output, let’s discuss the particular challenges besetting the “slightly right of center” columnist in the Age of Trump.

KP: Trump has pushed me slightly left of center. Basically, though, I’m a centrist. I don’t view issues through an ideological prism but tend to tackle every topic with a fresh eye. Writing the column is how I find out what I think.

ME: My soul mate! Still, these are hard times for a columnist of any persuasion. Do you always – or ever – read the comments following your columns on the WaPo website?

KP: I never read the comments. Never. Why? Because I’m busy, that’s why. And I fundamentally don’t — and can’t — care what others think of me. If they have something interesting to say, they can write me a letter or an email. I read those.

ME: As a veteran cultural/political columnist, have you ever seen our country as divided as it currently seems to be? How optimistic are you about the American project at this point?

KP: Well, there was 1968. That wasn’t exactly a Camelot era of bipartisan comity. This, too, shall pass.

ME: Do you think your “dual citizenship” – Washington, DC and Camden, SC – gives you a unique perspective that some of our major pundits just can’t match?

KP: I think that time spent away from DC is invaluable. I used to say that I go to DC to get my battery charged and go home to SC to get grounded. This is still true, though I’m enjoying home more than DC these days. The Trump era has created a toxic environment and you feel it in the air. People are slightly crazed because of an over-arching sense of disorder. You don’t feel this so much outside the Beltway. I also find that I’m my most honest self when far from The Green Room.

ME: Ten years after writing Save the Males: Why Men Matter, Why Women Should Care, do you still think the males can be saved?

KP: I think they need saving more than ever — in a sense. More and more, however, I think it’s women who may need saving from themselves lest they get what they want — absolute power and a world in which men pay them no mind whatsoever. How dull life would be without men to make us laugh and remind us not to take ourselves so seriously.

ME: Do you ever long for the days when a public intellectual wasn’t expected to affiliate with “Team Left” or “Team Right” and could simply be appreciated for her sparkling wit, lively prose style, independent thinking, and compelling ideas?

Kathleen Parker will appear at the ‘Prince of Scribes’ dinner at Tabby Place in downtown Beaufort on Friday, November 2nd. For more information about the Pat Conroy Literary Festival, visit www.patconroyliteraryfestival.org

Margaret Evans is the editor of Lowcountry Weekly. Read her regular column at Rants & Raves or visit her blog at www.memargaret.com

Blessed Are the Pure of Art

The Saving Grace of Birds