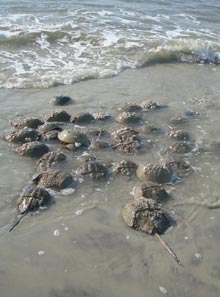 On the spring’s full moon this May 6, scientists, Master Naturalists and members of the Department of Natural Resources (DNR) will be gathering in great anticipation for the arrival of two endangered species on South Carolina’s barrier islands. “To me this has always been one of nature’s greatest stories,” said Pete Richards, President of Fripp Audubon. That is, the story of the horseshoe crab and a shorebird called the Red Knot, and the synchronicity of their fragile existence.

Flying four days and nights nonstop over the Atlantic Ocean, Red Knots will take one of their first rests here on South Carolina’s barrier islands (such as Harbor, Otter and northern Hilton Head) before their big feast on the Jersey shores of the Delaware Bay. Weighing as little as an iPhone, these masters of long-distance aviation fly about 18,000 miles every year from their wintering grounds at the southern tips of Chile and Argentina near Antarctica to their breeding grounds north of the Arctic circle in Canada and back.

According to a 2011 report on the status of Red Knots in the Western Hemisphere produced by WHSRN (West Hemisphere Shorebird Reserve Network), there has been a major decline in their population, from 16,190 in 2009/2010 to 9,850 (aerial count) or 11,200 (ground count) in 2010/2011. In fact, the shorebirds’ population is now a fifth of what it was 10 years ago. The alarming drop-off in the Red Knot population led scientists to discover the rapid decline of another species, the horseshoe crab.

The horseshoe crab is the living fossil of the ocean floor with a biological design that’s endured more than 350 million years without venom, stingers or harmful pincers. Their evolutionary secret to surviving the eons runs in their blue blood, a result of carrying copper as an oxygen carrying pigment rather than hemoglobin. However, it’s not the blue color that sells quarts of their blood for $15,000.

Found within their blood is a compound called LAL (Limulus Amebocyte Lysate) that immediately clots around fungi, viruses and bacterial endotoxins. In other words, horseshoe crab blood is the equivalent of liquid gold for biomedicine. Since the discovery of its anticoagulant or blood clotting properties, all intravenous drugs are now LAL tested for bacterial contamination before the FDA can approve them. Medicine has made great strides in medical devices that contact blood and cerebrospinal fluid. Of course, a $50 million a year LAL industry in the U.S. calls for a great number of harvested horseshoe crabs, which in turn raises great concern for their depopulation.

In 1992 when the Atlantic cod fishery collapsed, the watermen of Delaware Bay discovered that there 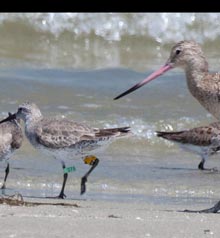 was no better lure for conk and eel than horseshoe crab. The annual horseshoe crab harvest for bait increased to 2.5 million from a few hundred thousand, says Larry Niles, a biologist with the New Jersey Division of Fish, Game, and Wildlife in Trenton. When the horseshoe crab population plummeted so did the Red Knot. The endangered shorebird depends on excess horseshoe crab eggs packed with protein to refuel the last leg of its flight to the Arctic tundra.

It’s around this time each year that the spring’s warmer water and the cycle of the moon beckon these prehistoric arthropods from the ocean floor to coastal estuaries where thousands will spawn their eggs. The higher tides on a full moon allow horseshoe crabs to bury their eggs higher on the sand. The two-week incubation period coincides precisely with the next big tide on the new moon to wash the hatchlings to sea.

Remarkably the Red Knot’s journey is synchronized accordingly. With only two weeks to double their weight, Red Knots will vigorously drill in and out of the sand like a sewing machine in search for horseshoe crab eggs. Their lives depend on it, as well as the continued existence of arctic habitat for breeding. These birds could be particularly affected by global climate change. Charles Duncan, who leads the effort to protect the birds for the Manomet Center for Conservation Sciences, speculates that more frequent storms are the reason that knot mortality increased last year on their southern migration despite leaving the breeding grounds in good condition. (You may recall the four or five strong Atlantic hurricanes of last year.)

Saving the birds from extinction is an international effort. Beaufort’s DNR and Master Naturalist experts are busy tagging Red Knots with geolocators that track the day-to-day diary of where each bird travels. Protecting horseshoe crab populations goes hand-in-hand with the survival of the Red Knot. South Carolina is one state to pass a bill prohibiting the harvest of horseshoe crabs for bait, which has been a model for the current HSC Management Plan.

You too can help the continued survival of these species. If you’re ever walking down the beach in the morning and see a horseshoe crab turned upside down by the rough surf, pick it up on either side of its shell and return it to the water. Upturned in the sun the crabs can die in a few hours if they’re not picked off by shorebirds first. It’s important not to grab them by the tail, which is their riding mechanism. If you find one that’s tagged, dead or alive, report their identification number with the displayed toll-free phone number to U.S. Fish and Wildlife Services.

On Thursday, April 26, Fripp Audubon presents Dr. Al Segars, a veterinarian for SCDNR and Coordinator of the ACE Basin National Estuarian Research Stewardship, who will enlighten attendees with his expertise on the correlation between the two species. It’s a free event at 7 p.m. at the Fripp Island Community Center (passes will be provided at the gate for off-islanders. Folks are encouraged to bring a small snack to share at the meet ‘n’ greet at 6 p.m. Contact Pete Richards 843-441-2153 or at pete.richards@comcast.net.

Unfortunately, scientists cannot predict if the horseshoe crab populations will rebound in time to save the Red Knot. How an ancient sea creature could impact a bird that could fly to the moon in its lifetime is one of nature’s spectacular ironies. This next full moon, as you look up at the night’s sun, remember the story of the horseshoe crab and the Red Knot. 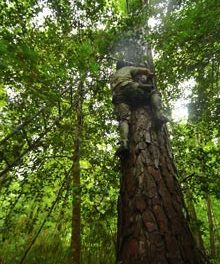 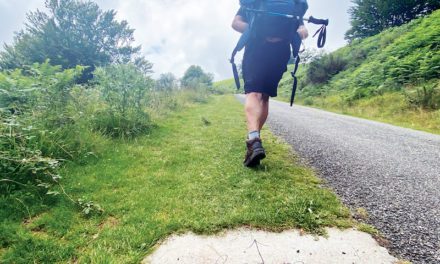 Grandmother Kayaking 2,500 Miles for a Cause