The Cause of Insanity 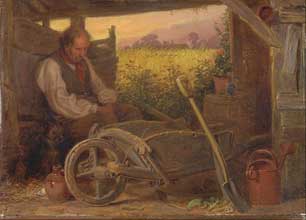 Gardening makes you stupid. Or at least crazy. Well, I guess I can only speak for myself; but, based on empirical data and decades of observation, I can say with at least moderate certainty that gardening makes me stupid. And crazy.

Years ago I was in the early throes of camellia madness, searching out rare or no-longer-available varieties from small and out of the way nurseries. Indeed, my delightful little collection was well underway when I realized that the freezes and winds of winter had arrived. I panicked. I’d spent all this effort and no small amount of money starting this wonderful collection of magnificent plants – and I was convinced everything was facing disaster.

Please bear in mind that I have grown up around camellias, have tended and grown them since I was six years old. They are perfectly adapted to our climate in most cases, and require little more than benign neglect to thrive here. Every one of these new acquisitions was actually ideally suited to the climate and location I had placed them in, still in their large containers.

None of that mattered. In a crazed dash, I rushed out and bought huge sheets of heavy plastic and lengths of lumber. As night got closer and closer, I found myself desperately constructing a completely makeshift framework of lumber, failing miserably to get even one corner square. Then I opened up the large sheets of plastic to cover the framework. As the cold wind blew stronger and stronger, I attempted to stretch the cover over the whole structure.

Like a boat’s sail – or like a giant’s laundry on a clothesline – the sheet of plastic would almost get over the frame when a gust would blow it completely away. It was Sisyphean! Over and over, the same scenario of almost succeeding, only to have the effort dashed. It was nine that night before I finally had a cover protecting all the cherished plants.

Early the next morning I went out to check on the plants. The cover had again blown off during the night. The freeze had come. But every single camellia was just fine, showing no ill effect at all; even all the flower buds were undamaged. Which is exactly what I knew from decades of experience. It’s just that gardening had made me both stupid and crazy.

A few years after I started making a garden in the South Carolina Lowcountry I planned a visit to an old friend who had moved to central Florida, in an area of hundreds of nurseries featuring a range of plants completely unseen in our nurseries here at the time. I had a little baby pickup truck, so I knew I was well prepared for a plant-shopping trip.

I got to Gainesville, and my friend had plotted out three days of travel among the nurseries. We’d head west one day, hitting three or four primary targets; then a day visiting nurseries south of the city; and a day driving east. Each daytrip would expand as we’d discover other growers along the way.

It was a revelation.

However, I had neglected to factor in my friend’s own plant acquisition requirements. Halfway through the first day, the poor pickup had become completely full with gingers I’d never seen before, long-sought-after crinums, camellias, hardy begonias and bromeliads. Even the extended cab was overfilled inside, crowding the passenger seat up front.

With two more days to go, we realized we were going to have to adapt. My friend in those days drove a big Cadillac, so for day two it was drafted to join my pickup on our trip south. Once again, the same scenario; only this time both vehicles were filled to overflowing by the second stop. We cut the day short to return and unload.

Day three was ridiculous – we’d gotten so jaded with our first two forays that we rejected out of hand anything which wasn’t staggeringly rare or completely unknown to us. Huge orchids in full flower for twenty bucks – nope! Too common. Magnificent camellias in giant pots, marked down to thirty five – nope! Won’t fit in the truck. Rejecting treasures left and right, we still managed to completely overload two vehicles with rarities.

As time grew short before my return to the Lowcountry, we set about dividing up our acquisitions. We should have been more diligent about keeping track of who bought what, for we found we had to haggle and negotiate over some things both of us thought were our own. It became clear pretty quickly, however, that there was no way I would be able to get all my plants into the truck for the trip back. Plants were piled on top of plants in the truck bed, plants were sitting in the passenger seat and completely filling the rear seats in the cab of the truck. There was a definite problem with seeing out the rear view mirror. And still there were more plants to cram in somehow.

The only resolution possible was for me to leave behind some of my treasures for my friend to care for until I could return. Once that decision was made, I squeezed in and headed north.

Only as I began driving up US 301 did I realize that driving over 40 miles per hour caused wind damage to the plants in the truck bed. And I was to connect to Interstate 95 in a few miles, and I certainly wasn’t going to be able to stay under 40 mph on I 95. Quickly checking my map, I found back roads going through small rural towns connected well enough to get me back to Beaufort; if I followed this circuitous route, I could minimize the damage. I would, however, double my driving time and at least double my fuel consumption.

As I got closer to the first state line into Georgia, I suddenly realized I was going to have to produce a certificate from each grower proving that each of my plants going into Georgia – and later South Carolina – was non-invasive and free of disease. I thought my panic about 40 mph was bad . . . imagine having to face the border guards!

On this issue, however, I discovered I was covered. Each grower had added a phyto certificate to the receipt. I’d not noticed, and I hadn’t even thought about asking at the time, but fortunately my friend had made the requests of the nurserymen.

Eventually, in the middle of the night, I pulled in to my driveway in Beaufort County, exhausted and deeply relieved. And I had more than a moment of remonstrance with myself, which arose from the painful and acute knowledge that I’d become so incredibly stupid and so hopelessly crazy. Made so by compulsive gardening.

There was no chance at all, I swore, that serious and disciplined gardeners such as Sandra Educate or Jennifer Staton, experienced plantswomen such as Alice Massey or Laura Lee Rose, masters of planning such as Jay Weidner or Jenks Farmer – no chance, I say, that any of them would ever do anything so crazy as I did on this trip.

Well, the really crazy thing is that . . . I’d do it again! And now my truck is bigger! 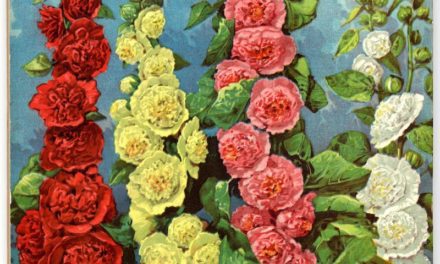 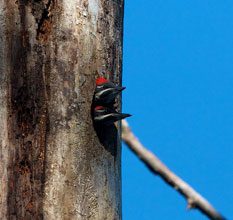 The Burdens of Job on the Gardener 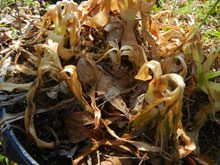