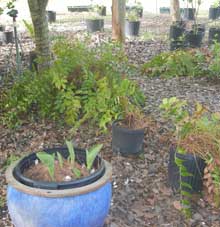 When you’re as lazy a gardener as I am, and when you procrastinate just because you can . . . well, sooner or later you have to get right down and start working in the dirt. Today I reached that point and admitted that the new garden bed had to be addressed immediately.

One of my problems stems from my preference for growing and learning about plants, instead of the design and arranging of plants for garden effect. I tend to collect every new plant I discover; it seems to matter little whether I have a place in mind for it, nor even if it is likely to grow in our challenging climate. This leads inexorably to my current difficulties.

I have dozens of unusual or rare (or common!) plants, sitting in their pots where I’ve cared for them with varying degrees of success. Very often I will have found ways to propagate them, which automatically multiplies my problem. Here at the farm, I have created an unkempt personal nursery of plants in pots, crammed cheek-by-jowl beneath some fruit trees and an ancient Camellia sasanqua. They are close by the big back sitting porch, and they make for a lovely view in that corner of the yard.

At least the view is lovely to me. Unfortunately, there are daily comments from family and visitors, most along the lines of “When are you going to do something about that bunch of plants still in their pots?” While I find immense pleasure in strolling among my pots of hydrangeas (I counted some 20 different kinds of hydrangea this morning) and crinums (only 14 different varieties of these) and dozens of other kinds of plants, it seems that others can’t quite appreciate the beauty I see there.
So today is the day I have committed to turning this pot-plant jumble into a garden bed worthy of the treasures in it and the nearly 200-year-old homestead it will complement.

Eventually, two of the fruit trees will need to be removed. When my father planted them a quarter century ago, these two (an apple and a crabapple) somehow were planted directly beneath a power line. As gorgeous as they are in flower, neither can fend off the bugs and the squirrels. We have gotten a total of three apples from the apple tree (which isn’t suited to a climate as far south as ours, anyway), and the crabapple yields most of its fruit crop each year to the plum curculio. I haven’t broken down and sprayed, and don’t really intend to. Anyway, these two are beneath the power line and have now almost reached that high. I’ll have to try to keep them in check by pruning (hah!), or remove the trees. Out they will go.

That will leave two big Kieffer pear trees, the old fashioned farmhouse pear which makes for a big, hard fruit ideal for cooking and preserving. There’s another crabapple tree which managed to avoid being right under the power line, and I’ll keep it for the spring show it puts on. And the old Camellia sasanqua.

That camellia and the others which surround the house were planted in the nineteen-teens or earlier by descendants of the builders of this old house. The sasanqua had grown so large that my father whacked it down to a stump some thirty years ago. The stump measured 22 inches across. It has regrown from that brutal discipline and is again 18 feet high and has a 15 foot spread.

These should provide enough shade for the hydrangeas, which often melt in our hot summer sun. Removing those two badly placed fruit trees will open up part of this area to mostly-full sun, which the crinums love. Having more full sun also means I can move a number of daylily plants to the new bed, and I’ll be able to find a good place for several gingers and the wonderful late-winter-flowering Edgworthia chrysantha in both yellow and red. I may even find a place in the sun for the two antique rose bushes; one came from the tumbling-down 19th Century tenant shack down by the creek, having grown there since before 1900. When my father found it and brought it up to the garden here, he promptly called it “that blue rose,” for its astonishing bluish cast to the pink double flowers which appear for a couple of weeks in mid spring each year.

For twenty years I’ve grown a very nice low-growing ginger, Elletaria cardamom, which is one of the sources for the spice and which is for me a low-growing dense ground cover with fantastic fragrant leaves. I’ve managed to propagate a nice small batch of them, and now I think I may use them here both as a ground cover and an edging plant. That will also be the function of the many holly ferns, Cyrtomium falcatum, I’ve grown. Perhaps surprisingly, these holly ferns I’ve propagated from spores – for which I must only take minimal credit. It seems I have an area perfect for the spores to grow into plants, because some twenty years ago I kept three pots of holly ferns in one damp shady spot. Years after having moved the ferns away, I began finding little holly fern plants popping up. And they’ve been continuing to sprout for a decade and a half.

So this is the framework for my new garden bed. The shapeless, disorganized array of potted plants in the photograph is actually my first attempt today at laying out plants in a way that will be attractive, provide room for the plants to grow, and that will meet their needs for sunlight. Setting them out first like this helps me see them as they will be in the ground before preparing the ground and actually digging a hole. Then with that arrangement in my head, I can cut down the two fruit trees, locate the paths, add more filler plants, dig the holes, plant the plants, and mulch them in.
Maybe another picture and an article on how it all turns out will follow once the garden bed is actually growing in place.

Meanwhile, a couple of coming events, off the radar for many in Beaufort, offer something a bit different. April 26 and 27 marks the annual Sacred Heart Garden Festival in Augusta – just up the river a ways. Information is available at www.sacredheartgardenfestival.com. And I’m told by Jenks Farmer – notoriously entertaining garden writer and speaker, founding director of two major botanic gardens, and proprietor of Lush Life Nursery – that he will be hosting one of his occasional Crinum Field Days at his family’s two century old farm in the suburbs of Beech Island, this side of Aiken, on May 11. Email Jenks at jenksfarmer@mac.com. 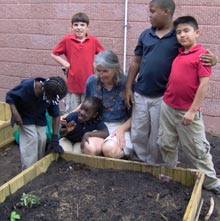 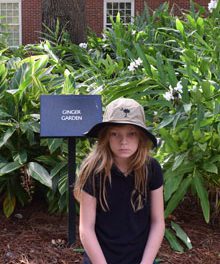 Light Up Your Garden with Bulbs