This may come off like a wildly unsubstantiated sweeping statement, but I’m willing to bet that the overwhelming

majority of New Yorkers have never been to the Statue of Liberty or hopped the express elevator to the top of the Empire State Building.
In fact I’m betting a similar percentage of Parisians have never gazed down upon the City of Light from the Eiffel Tower, startling numbers of Los Angelinos have yet to pass through the turnstiles of Disneyland, and perhaps millions of native Romans will never tread in the footsteps of gladiators by visiting the Colosseum. As a species we tend to take our surroundings for granted, which explains a lot when you think about it. I lived in Seattle for several years and I’ve got to go back for about a month with a wad of cash just to catch up on all the “touristy” stuff I never did.  Hey, I’m told the Space Needle is overrated anyway.
With the specters of these missed opportunities in mind, I am resolved to take full advantage of all the Lowcountry has to offer. And the best way to get a fresh perspective of a river town with a tourist trade is – of course – by water.

Capt. Dick is happy to oblige us with a cruise up the Beaufort River. Capt. Dick and his wife, Linda, have been ferrying folks on various Lowcountry waterways since the early ‘90’s aboard what he refers to as “a big double-decker monstrosity called the Beaufort Belle.”  Today we’re departing the Beaufort City Marina on The Prince of Tides, his new 30 passenger canopied tri-hull. This tour departs the marina each afternoon and usually runs about an hour and twenty minutes. Private charter tours are also available aboard both the Prince and the six passenger Carolinian.  Why not consider a Gilligan’s Island theme for your next birthday? Which brings up the obligatory question: if they were just going out on a “three hour tour,” how come the Howells had all that luggage?
Once again, I digress.
On this particular day I’m standing in the marina parking lot with Neil Simon lines running through my head: “Man it’s hot. It’s like Africa hot. Tarzan couldn’t take this kind of hot.” I grew up in this climate. I know from hot. But June’s barely begun and the heat index is 105 degrees. All you have to do to break a sweat is stand still. As I mentioned, I’ve spent the last three and a half years in a place where severe weather advisories are issued if the mercury creeps past 80. No kidding. Indeed, to paraphrase Mr. Simon, it seems we are a mile from the sun. However, this makes for the perfect excuse to seek relief in the natural air conditioning the river has to offer. As Capt. Dick points out early in the cruise, these balmy breezes lured the wealthy planters to town during the summer months and helped old Beaufort to prosper.
Once we’re out of the marina and headed up river the breeze is cool, constant and salty. The Captain explains that the Beaufort River really isn’t a river at all, it’s pure salt water freshened twice daily by the tides. Capt. Lawrence – a recent addition to the crew – chit chats with passengers, points out landmarks and answers questions. Yes, we’re likely to see dolphins up river.  Capt. Dick’s glad to have him aboard.

“I got real lucky. Obviously with two boats you need a second captain. I’d been looking around here for captains for quite a while. Lawrence was born in Beaufort, grew up in Beaufort and moved away to Virginia for thirty years or so, moved back, bought the house next door to me and had his captain’s license.” Now that’s serendipity.
We emerge from the shadow of Wilson Memorial Bridge running parallel to the Old Point on the port side (that’s “left” for you landlubbers).  Capt. Dick explains that the most famous of Beaufort neighborhoods is so named because it sits on a piece of land that juts out into the river “kind of like a point.  And, well, it’s old.”
Rimshot, please. Chuckles from the passengers.

Ah, it’s good to find a nice dry sense of humor in the middle of a river in all this humidity.
We’re a couple of days past the new moon and the extremely low astronomical tide exposes more of the river’s hidden features than usual. A sandbar just below the surface blocks the Prince’s usual route around the Point so we backtrack rather than risk running aground. Capt. Dick explains a bit about the use of tabby (coastal concrete) in the old sea wall and some of the homes. By the time we clear the sandbar we’ve learned that A) oysters must be exposed to air and light in order to survive, and B) Sally Field rented Mayor Bill Rauch’s former home, “The Castle,” while in town filming Forrest Gump. “The Mayor left town for a couple of weeks.” I wonder if Sally Field needed all five and a half baths during that shoot.
Beaufort’s film history continues to highlight the tour as we cruise past the Edgar Fripp house, Tidalholm. The wealthy plantation owner built the house in the mid-nineteenth century to escape the heat and mosquitoes of his St. Helena’s plantation and cash in on those balmy breezes. This is also one of the most famous movie homes in the Southeast. I’ve been in love with this house since The Great Santini. The Big Chill just made me even more envious. Nothing’s changed.
At the mention of the films one of the teens on board actually stops texting for a moment.
As the Old Point disappears in the Prince’s wake, Capt. Lawrence advises us to keep an eye out for dolphins. “They’re usually some up ahead by this next sandbar,” he says. Now the teenager ceases texting all together and flips his phone to camera mode – just in case.
An Audubon Guide book’s worth of shore birds wade in the creeks and pick among the exposed shoals of oyster shells. Stoic great and snowy egrets mingle with herons, cormorants, various gulls and – appropriately enough – an American oystercatcher. His long beak is bright orange in the afternoon sun.  Just past the old neighborhood of Pigeon Point (originally conceived as a golf resort in the 1930’s) the star of the cruise shows up: the Atlantic bottlenose dolphin.

For the better part of an hour or more we encounter several pods. Capt. Dick maneuvers the Prince to allow maximum observation while maintaining a discreet and safe distance between human, boat and dolphin. Capt. Lawrence points out the dorsal fins as they rise. The sleek grey creatures eye us with reciprocal curiosity, especially some of the smaller youngsters and mothers with new calves cruising in tandem. Who knows? Maybe we’re the main attraction of a cetacean river tour. Maybe one bottlenose is saying to the others, “hey, keep an eye out. This big noisy floaty thing full of land mammals usually comes by this time of day. They’re so cute.”
As cameras (and cell phones) snap away Capt. Dick explains that the Beaufort River is prime dolphin habitat because of the water quality. The entire ecosystem depends upon the marsh grasses that convert solar energy into nutrients, die off, are flushed out by the tides to break down and feed the plankton.  They are the reason for the river’s murky color and the basis of the sea-going food chain.

Near the mouth of Albergotti Creek within site of the Marine Corps Air Station, Capt. Dick decides against continuing up the Intracoastal to Canada and we begin the homeward leg of the voyage. We pass by Pleasant Point Plantation, a stately white columned manse built by Jack Barnwell in 1927 and apparently the scene of many a raucous party patronized by Florenz Ziegfield and bevies of female entertainers from his famous Ziegfield Follies. The home boasts the first indoor swimming pool in the state of South Carolina. A giant “for sale” sign is bolted to one of the home’s two docks.
A hundred yards down river the bones of the Clifton, a 19th century merchantman, poke out of the water, visible only because of the unusually low tide.  According to Capt. Dick the ship, heavily loaded with grain from plantations up river, “sprang a leak and the grain swelled and burst the bottom out of the boat.” The boat ended up on a sandbar just yards from shore. “The crew probably walked home.” This could be the least disastrous, most convenient (and embarrassing) shipwreck in the state’s history.
Once again we pass under the Woods Memorial Bridge. Capt. Lawrence points out an Osprey nest built atop one of the timbers. We passed the parents a mile or so back, riding high on the wind in concentric circles over the marsh. The two chicks in the nest are big enough to be left alone now. They’re days away from fledging and, like the dolphins, a thrill to see up close. I ask Capt. Dick if this ever gets old. There is no hesitation. “No,” he says. 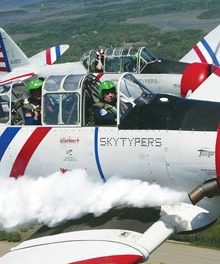 Into the Wild Blue