Last week, HELP of Beaufort honored Beaufort Memorial Hospital for helping them feed Beaufort’s homebound residents for the better part of the last half century.

HELP’s executive director Steve Curless said, “We deliver 80 meals a day to people who are homebound. That’s 730,000 meals over the past 40 years. We wanted to recognize the hospital for all they’ve done.”

HELP buys the meals from BMH at a reduced rate. The hospital also gives them a place to work, styrofoam plates for carrying the meals, and covers the cost of labor.

Says BMH/Sodexo’s director of food services, Ray Pridgen, “This program fits right in with the hospital’s overall mission to improve the health of the community. That’s what we’re all about.”

That’s what HELP of Beaufort’s about, too, and has been for quite some time.

In February of 1973, First Presbyterian Church had a week-long series of services called a Festival Of Faith. At its conclusion, the women of the church felt led to initiate a project in the local area, where its members could have a “hands on” experience in their own neighborhoods and serve Jesus Christ by serving others in His name. By the following year, they had developed Meals On Wheels. The church allocated funds for meals to be delivered each weekday at noon to the elderly and disabled. The geographic limits would be Bay, Carteret, Ribaut, and Boundary Streets.

The first meals were prepared by the Jarvista restaurant (later named The Galley) located on Boundary Street, across from the Greyhound Bus Station. Later, the building burned and the property was then occupied by the Omega Mart. The beverages were all donated by Coburg Dairy.

The Jarvista closed in December of 1976, and contact was made with Beaufort Memorial Hospital. With their help, for the first time, each client could now receive an individualized diet, as recommended by their doctor. Kitty Harley, Ginny Elliott, and then Frances Jenkins headed up the program through the years. Beth Moon took over the program in February 2003 and ran it until April 2015, when Debbie Marcil took over and is the current director.

HELP Of Beaufort was founded in July 1979, also by First Presbyterian Church. HELP of Beaufort is an all volunteer organization that depends completely on donations of clothes, food, money, and household items. Everything that is donated is given away to the needy.

Says director Steve Curless, I love HELP of Beaufort because they give everything away. Everybody’s a volunteer and nobody gets paid. We bring in donations of food, clothes, household items, etc. Sometimes people come in just to socialize. Others come in dire need. We collect clothing once a month, stock the food pantry once a month. Probably about 15 families a day come through and get food. Three-five people a day come in needing financial assistance. Twenty-five-30 a day come in to get clothing.”

And, of course, 80 people have hot, nutritious meals delivered their homes every day. Thanks, Beaufort Memorial Hospital. Thank you, HELP of Beaufort. 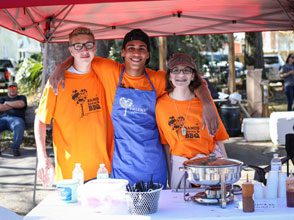 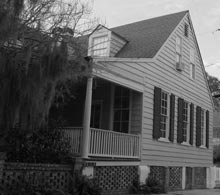 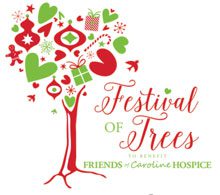 A Festively Safe Festival of Trees