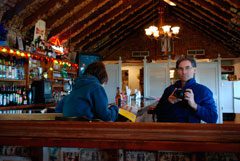 This guy walks into a bar and orders a beer. As the bartender starts to pour, the guy notices a dachshund napping on the floor.

“Does your dog bite?” he asks the barkeep.
“No,” is the reply.
As the guy reaches down to pet the dog it goes berserk and latches onto his hand as if it were a rare beefsteak. The guy lets out a yell and starts flailing about trying to shake the dog off. Finally the little dog lets loose and prances triumphantly out the door.
The guy’s stunned, in shock. He points a bloody finger at the bartender who’s watched the whole thing without expression.
“I thought you said your dog doesn’t bite?”
“That,” says the bartender, “is not my dog.”
Rim shot, please. Actually there’s kind of a point to that old joke since state health codes prohibit your best four-legged pal from following you inside your favorite bar or restaurant. The good news and loophole here comes via that key word, “inside.” A great number of Lowcountry restaurants and bars also have tables out of doors and most of them are just fine with canine clientele as long as both dog and owner behave themselves. In fact, Beaufort’s waterfront is 100% pet friendly from the Marina to the Bridge and every spot will gladly provide a bowl of water for a thirsty dog.

Paninis, on the marina end of the park has the largest deck and the only fully equipped outdoor bar on the river. We like the scratch-made wood fired pizza and a cold glass of white. Hemingway’s and Luther’s get particularly high marks on the pet chart. There’s plenty of cold beer and shade at both places and at Hemingway’s Scout always gets a bowl of water and a treat without having to beg. After 20 years competition is still fierce for space on the tiny porch at Plum’s and if it’s crowded you and Lucky may want to wait it out with a gourmet coffee next door on the porch at Common Ground. The CG deli counter comes highly recommended, too. Kathleen’s is the next to last stop. The bar may be off limits for the pooch, but the restaurant’s spacious covered deck is a great place to beat the odd shower and they’ll make you and your pal feel right at home. Tell Scott I sent you. Last stop on the water is also the most upscale. The outdoor seating at Saltus River Grill is a Napa style patio with great sunset views, a craft cocktail menu and fresh sushi.

Dogs are always welcome at Nippy’s Fish. A block and a half off the water on Scott Street, Nippy’s is a throwback, old school Lowcountry lunch spot with loads of outdoor seating and live music on Friday and Saturday afternoon. The shrimp sliders and fish tacos are not to be missed and Diana always has a treat for her four-legged patrons.

Parched and weary after a big day on the beach and trails of Hunting Island State Park, the Shaffer household usually wheels into the Johnson Creek Tavern on the way home. The JCT’s split-level deck is right on the marsh with spectacular views. The staff loves a dog and there’s no better spot on the Sea Islands to sip a cold one and soak up the remains of a true Lowcountry day with your best four-legged friend at your feet.

'Life Behind Bars' is written by Mark Shaffer. 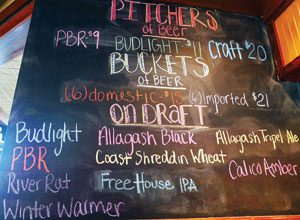