True barbeque fighting is not for the faint-of-heart! It’s a never-ending battle. Which is best – eastern North Carolina vinegar and pepper, western North Carolina tomato sauce or South Carolina spicy mustard sauce? Folks with an opinion on the matter are dead set in their ways. Don’t waste your breath on the discussion. Over the years I’ve had to listen to other people’s thoughts on the subject, even when I happen to know for a fact that vinegar and pepper is the only way to cook pork barbeque. The best thing too do when you find yourself in the middle of a barbeque argument is to keep your mouth shut and smile. Still, everyone will agree that pork barbeque is mighty fine eating! One of the great things about pork barbeque is that it’s not fancy food. Barbeque is a food for working class people and it doesn’t cost too much.  The best barbeque joint that I know (Parker’s Barbeque in Wilson, NC) sells their pulled pork deliciousness for about $9 per pound/pint. If you’re paying more than that for pork barbeque, I can hook you up with an easy vinegar and pepper version that’s just as delicious as anything you can buy. This week’s recipes also include some tasty sides and a wonderfully easy banana pudding. Pulled pork, chopped pork, sliced pork – texture doesn’t matter near as much as the flavor.  Do you have the magic ingredient? Is your pork barbeque totally fabulous?

If you’re brave enough for the competition, please join me on Saturday, September 4th for Bands Brews & BBQ, a South Carolina sanctioned barbeque cook-off to benefit Friends of Caroline Hospice. The event will be held from 12:00 until 4:00 p.m. at Beaufort Town Center. Tickets are $15 per person. If barbeque isn’t your thing, there’s an ‘Anything But Pork’ competition on Friday night from 6:00 until 9:00 p.m.  For more information contact Friends of Caroline Hospice at 525-6257.

Place pork in a Dutch oven with 1 cup vinegar, 1 teaspoon black pepper, and enough water to cover.  Bring to a boil.  Reduce heat.  Partially cover and simmer for 2 to 2½ hours.  Preheat oven to 300 degrees.  Drain pork.  Place on a rack in a roasting pan.  Bake for 2 and 1/2 hours or until meat is very tender.  Brush every 15 minutes with sauce made by combining 2 cups vinegar, red pepper, and black pepper.  Remove pork from oven.  Serve with remaining vinegar and pepper sauce. Serves 8 to 10.

Grease a 9×13-inch baking dish. Bring 2 cups cream and 6 cups of chicken broth to a boil. Stir in grits and cook over medium heat until they return to a boil. Reduce heat to simmer, cover and cook for 25 to 30 minutes, stirring occasionally.  Add milk if needed to cook to desired consistency. (Grits should be slightly runny when finished.) Cook collards in remaining 2 cups of chicken broth for 10 minutes. Drain and blot dry with paper towels to remove excess moisture.  Add butter and cheese to grits. Stir until butter and cheese melt. Stir in collards. Spread evenly in casserole dish and top with crumbled bacon. Bake in a preheated 350 degree oven until lightly brown on top.  Serves 12.

Drain and rinse peas.  Toss gently in a mixing bowl with onion, pepper, parsley, and dill.  Sprinkle with equal amounts of oil and vinegar, until well moistened.  Season with salt and pepper to taste.  Marinate in the refrigerator for several hours before serving. Serves 6 to 8. 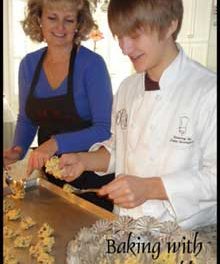 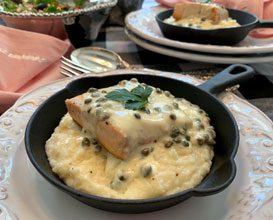 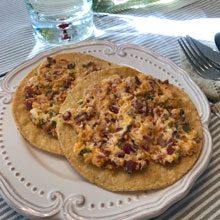