Continually inspired by the shifting waves of his life, the Lowcountry and the coast he calls home, Matt Eckstine’s evolution as a songwriter has reached a new peak on his second solo album Lil’ Blue.

Anchored in the sand, all alone between the devil and the deep blue sea, the “celebrity” cabin Little Blue on Hunting Island in Beaufort County became a focal point for Eckstine while putting together this new batch of songs. A photo by Delk Haigler made for the perfect cover.

The cabin withstood a frontal assault from Hurricane Matthew in 2016, only later to be torn down by the government due to erosion. Here grows the unifying theme from Eckstine’s work: hold fast and roll with the tide, finding peace in where you are between the crashing waves of life.

For years, Eckstine has developed as a songwriter and performer due to the overwhelming support from his local fanbase that encompasses Savannah, Beaufort and Hilton Head. His old band, The Accompliceshit a peak regionally, selling out music halls and earning major support. He now rightfully claims the Lowcountry as his home and his performance space. His second solo album came to life thanks to the very ground he stomps 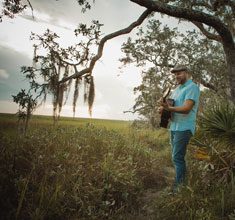 with his guitar every week.

Harnessing a wide range of influences from Laurel Canyon and Jack Johnson to Steve Earle and James Taylor, and straining them through an easy-going filter that embodies life on Coastal Georgia and South Carolina, coupled with imagery invoking that coast, Eckstine has grown from his John Prine influenced roots into a singular singer/songwriter inspired heavily by his home of nearly twenty years.

This year’s mandatory quarantine provided Eckstine with an opportunity. Moving to a home studio opened new possibilities for him to slow down and work on his craft, fine tuning unresolved songs and penning new ones.

“The making of this record is where I found the most joy with my home recording setup. I love working in professional studios, but waking up everyday and working in the home has a freedom that I really found to be inspiring.”

The result was seven brand new tracks that vary in sound and feel but are grounded in their influence—plus one track, “This Heaven,” which was previously recorded and released as a single. All of the new songs were penned by Eckstine with the exception of “Mahi-Mahi and Rice” which was written by Mike Harris and Jim Basso. The writing on the new album spans over seven years. Eckstine’s method to song craft has developed over time and is now defined clearly within his mind: he does not write the song, the song writes him.

“This method can take much longer to be fruitful, but for me personally it has yielded the best results over my career as a song craftsman. I believe that the universe is full of melodies and songs. I like to think of an instrument or the brain as an antenna reaching into the stratosphere. Every now and then if conditions are right you can metaphorically dial in to the frequency like a radio station and hear the tune.”

Get Your Art Out 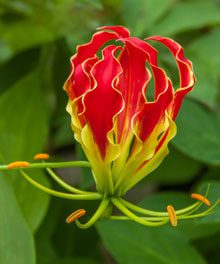 Picture a Song: Images that Sing 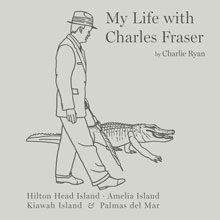 My Life with Charles Fraser