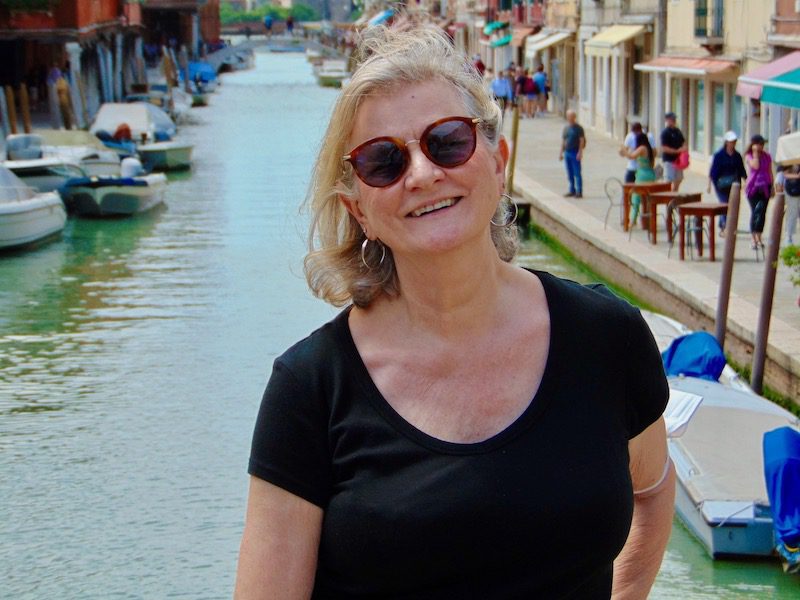 Donna Keel Armer returns to Italy where her memoir was born, Italian translation in hand.

It’s been two years since Beaufort’s Donna Keel Armer published her debut memoir Solo in Salento. At the time, we described her book like this:

Donna Keel Armer’s story begins with a lie. Desperate to break free from a life haunted by a wretched past, the loss of faith, and a slow sink into domestication, she tells everyone, including her beloved husband, that she requires time alone to research an historical novel. But her real purpose is a solo flight from everyone and everything.
In a small coastal village in Southern Italy she learns how to sort through the fragmented pieces of her life as her hands learn the art of mosaics. And, a baffling recycling system teaches her that life can be continually sorted and renewed. 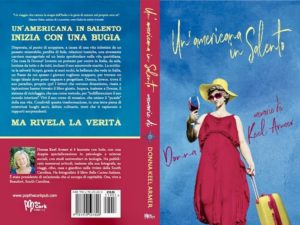 Indeed, it can be! Recently, Donna reached out to Lowcountry Weekly with news that proves it.

“In spite of Covid, and having to launch my book in the middle of a pandemic, miraculous things have happened,” she wrote. “My book has been translated into Italian. I will be traveling to Otranto, Italy, where the book was born, for a book launch on September 3rd.”

Donna is leaving a couple of weeks earlier, she says, so she can settle into a routine and “read my speech out loud a million times before I actually have to speak to the audience in Italian.”

In the meantime, she’s recording Solo in Salento as an audiobook, while working on book #2 in a mystery series currently in the submission stage. 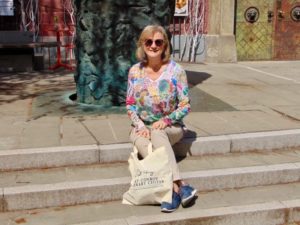 Donna in Slovenia with her Pat Conroy Literary Center bag. “He goes everywhere with me,” she says.

“My wish is to be an example to others who might think this aging thing is the end of all good things,” says Donna. “I turned 77 in May and hope I’ll still be writing at 97 . . . “

And what an example she is! When she’s not writing or traipsing around the globe – she recently returned from a trip to Northern Italy, Slovenia, Croatia and Austria – Donna spends time volunteering at the Pat Conroy Literary Center.

“Being a docent at the Conroy Center has given me a voice of my own,” she says, “and the ability to share some of Pat’s stories with those who come from far and wide to celebrate this man.”

We recently spoke with Donna Keel Armer, via email, about all this and more. . .

LCW: How does it feel to be launching your memoir – in Italian! – in the Italian town where it was born?

DKA: I’m gobsmacked! I’ve always wanted to have an opportunity to use that 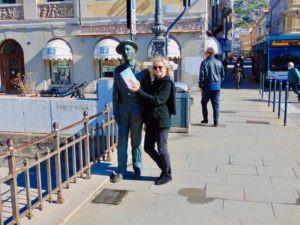 Donna in Trieste, Italy, reading her book to “James Joyce”

exuberant word and now I do. It’s one of those Cinderella stories – a chance encounter with a fairy godmother named Sally who is the force behind Solo in Salento being translated into Italian. But until September 3 when I stand in Piazza Umanitá Migrante in Otranto and say Buonasera… grazie per avermi invitato a tornare ad Otranto per presentare il mio libro, I won’t believe it. I’m excited and scared. The scary part is that my ability to speak Italian is at the three-year-old level and my presentation is in Italian. Thankfully, Sally will be by my side to bail me out when I stumble.

LCW:  Was it difficult to have the book translated into Italian? How does that work?

DKA: Friends in high places and fairy dust. I mentioned Sally Veillette as a fairy godmother who made this all happen. Ray and I rented her villa in Sicily in 2018 and 2019. At the time Sally (who is French, Sicilian, and American) was living in the states as she wanted her daughter Chiara to receive the best education. We invited Sally and her daughter to spend time with us in Beaufort, and I discovered that Sally is also a writer and translator. A grand friendship blossomed. After she read Solo in Salento, she contacted me and asked if she could translate the book. She said the Italian people need to hear uplifting stories about why other people fall in love with their country. We collaborated along with numerous other Italian people and in slightly over a year since the initial conversation it’s actually going to happen. 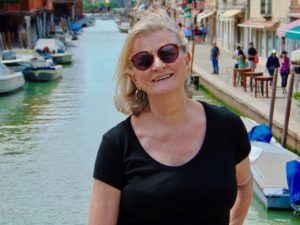 But it was also people state side, like Marly Rusoff, who helped me obtain the Italian rights from my publisher along with so many friends who encouraged me to pursue this direction. And I have to thank everyone who sold copies (particularly local independent bookstores and shops and the Conroy Center), who bought copies, who wrote reviews and who recommended it friends and family. Without all of these people this wouldn’t have happened.

LCW:  Tell us about your new mystery series.

The first book in the series is The Red Starfish. The location is a fictitious town in Puglia based on places I’ve stayed. The reluctant sleuth is Italian-American Lowcountry caterer Cat Gabbiano (Caterina Maria Lucia Gabbiano). She’s planning to hone her cooking skills with a year-long sabbatical in a restaurant in Italy. Part of her sabbatical encompasses spending time with her forever best friend Stella Lombardi, an American film star living in the small town of Castello del Mare (which translates Sea Castle) where the two girls spent all their summer vacations.

A few weeks before her departure, Cat receives a garbled message from Stella pleading for help. When Stella doesn’t respond to any of Cat’s calls, she contacts Stella’s estranged husband who nonchalantly says Stella is missing. The ex, the Italian police chief, a property attorney, the housekeepers and the mafia all play pivotal roles as Cat realizes she can’t trust anyone to help her find Stella. Solo in Salento has an underlying theme of fragmented lives and recycling, The Red Starfish touches on the delicate balance between humans and the sea.

The second book in the series is Moringa – Tree of Life. It takes place in the Lowcountry and involves a Spanish Count, an undercover FBI agent, a self-defense teacher, a senator, and the dark side of humans. The underlying theme is sustainability. I’m in the process of writing the second book in the series as I submit the first book to publishers.

And, of course, all of my writing contains food and wine. In a former life, Ray and I owned a restaurant, catering service and bed and breakfast so event planning, food and wine, and hospitality will always figure into my writing. But it’s also a tip of the hat to our own fabulous Beaufort caterer Debbi Covington.

LCW: It all sounds intriguing. Best of luck to you, Donna, and Buon viaggo! 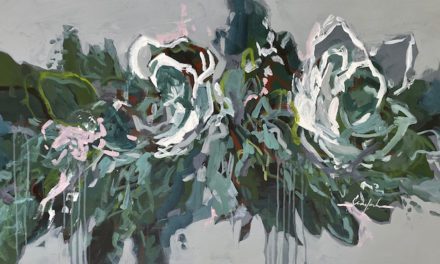