Beaufort Performing Arts is happy to announce the gallery opening of Flight of Fantasy, an exhibition of new mosaic work of local artist Nancy Pollock.

In this second exhibition at the Performing Arts Center Gallery the work has taken on a new look in both scale and whimsy.  The exhibition showcases a range of styles and materials in works created.  The new show has more sculptural pieces from large installations, a seven foot pyramid in the spirit of an Aztec temple, to a flock of whimsical sea birds with jeweled crowns. Flight of Fancy is rooted in the concept of shape-shifting, where an ordinary element is transformed into an object that is fanciful or even magical.  In one sculpture, “My Mother, Myself” the form of a female statue reflects and refracts the viewer’s image as part of a representation of femininity that goes back to Adam and Eve.
“Nancy Pollock’s vivid imagination and great sense of style have consistently been evident in her work in textiles, fashion, graphics, and now mosaics.  I have known Nancy my entire adult life and she is one of the most talented people I have ever had the privilege of working with.”  Michael Vollbracht, designer  of BILL BLASS
Much of this mosaic collection has its roots in Pollock’s earlier career in New York.  Pollock began as a weaver and apprenticed in a studio making tapestries for the first class cabins on Pan Am Airlines.  Along with the interior pieces, Pollock began weaving simple garments that were noticed by fashion designer Mary McFadden.  Pollock was commissioned to design knit and woven sweaters for the McFadden fall collection.  At the same time her life-long friend from Kansas City, Michael Vollbracht, used Nancy’s sweaters in his first couture collection.  Both the McFadden and Vollbracht collections received Coty awards that season. Today Vollbracht is the designer for the Bill Blass collections.
In her own collections for Nancy Pollock Studio and through Vollbracht for the next seven years Pollock designed woven sweaters and coats which appeared frequently in Vogue and Harper’s Bazaar and were worn by numerous celebrities including Elizabeth Taylor, Cher, Carol Burnett, and Cicely Tyson.  When the fashion business became too difficult with two small children, Pollock spent several years doing public relations for the perfume launches for Elizabeth Taylor, Cher, and Catherine Deneuve. She also designed and art directed Vollbracht’s acclaimed book of portraits, Nothing Sacred. After several years at college taking courses ranging from accounting to math theory, Pollock designed two exhibitions for the world-famous BATA Shoe Museum in Toronto –then on to Beaufort and a new artistic path.
The exhibition Flight of Fancy at the gallery at the Beaufort Performing Arts Center will host an opening night cocktail party in conjunction with the BPA performance on January 25th of the bluegrass band Cherry Holmes. For information contact Beaufort Performing Arts Box Office at : 843 521-4145.

Wishing Your Were Here… 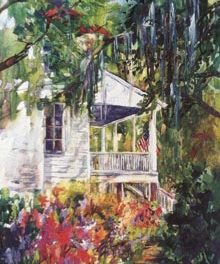 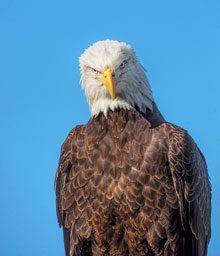