Total Eclipse of the Heart

There’s a solar eclipse heading our way – first time in almost 40 years – and I find myself anticipating the event like a child waiting for Santa to show up.

Beaufort is not in the prime viewing path, but we’re pretty close. They say we’ll have something to see here, something astounding and cosmic - literally cosmic! - and, Lordy, it’s not a minute too soon. I need a pick-me-up.

First, the obvious. Because it’s August. Is there any month traditionally less energizing, more paralyzing, than August? (Okay, there may be some votes for January, but go with me, here…)

To be fair, this August has been snappier than most, with high temps in the 80s instead of the 90s. (Apparently, climate change has its benefits.) But still. The soupy humidity . . . the deep, hypnotic green . . . the languid, bee-buzzed days and cicada-lullabied nights . . .

I’ve actually been taking naps in the afternoons, y’all. Naps!

In August, I always feel like Odysseus in the land of the Lotus Eaters. It’s not an entirely unpleasant sensation, but with school just around the corner - and a ratcheting up of responsibilities, both parental and professional - I fear lingering in this “land” much longer. If I don’t get a jump-start soon, I may just slip into a permanent coma.

In other words, I could use a good celestial phenomenon right about now.

But August isn’t the only reason I’m longing for this eclipse. There’s something more going on, I think. Something existential. Something downright spiritual, even.

It’s been a tough summer. In May, I lost a dear friend in a freak traffic accident, and the fog of grief has not quite lifted. Maybe it never will. Maybe this is just my life now – a little darker, a little sadder, a little more tender and fragile. So be it.

But then there’s the Big Ugly.

It never stops, the Big Ugly. You can turn off your TV and your radio - ah, cicadas - but inevitably, somebody in your house or car turns them back on, and there it is again: the Big Ugly.

You can open your laptop in the middle of a sleepless night, to write yourself a poem or maybe read something lovely – people still write lovely things - but invariably, curiosity will get the best of you, and you’ll click over to your Facebook or Twitter newsfeed. And there you will see the Big Ugly in all its terrible glory. The Big Ugly never sleeps.

It would be easy to blame the Big Ugly entirely on the Trump administration, and plenty of folks do. But I believe the Big Ugly precedes Donald Trump. The Big Ugly is a monster made of many parts - Republicans, Democrats, the Washington press corps, TV media pundits, radio shock jocks, corporate outrage profiteers, social media wrath-peddlers, “resisters” who fight hate with hate, and certainly, President Donald J. Trump. The fish does tend to stink from the head - but we are all part of the Big Ugly.

Enter the Great American Eclipse. That’s what they’re calling it, and boy, do I need it. I think we all do.

Again, Beaufort is not in the “path of totality,” but I love imagining what it will be like for those who are. The sky will get darker and darker. The temperature will drop. They say the animals and birds will become very quiet. At some point, Baily’s beads will appear. And as the Moon completely covers the Sun’s surface, the people in the path - wearing their safety glasses, of course – will see a “diamond ring” of light.

I may just have to drive up to Charleston for that. I want to see that diamond ring. I need to. I need to see a tangible sign – writ large like scripture across the sky - that the light shines in the darkness, and the darkness has not overcome it. I want a big, fat, galactic metaphor - visible proof that the dark can pass over the light, even cover the light, and there will still be light.

While researching the Great American Eclipse, I came upon a fascinating article written by an astrologer. Now, I am a lot of things – a Birder, a Broadway musical fanatic, a Presbyterian, a disciple of E.B. White - but what I am not, typically, is a follower of astrology. Still, this piece was so profoundly interesting, I couldn’t dismiss it.

Did you know that solar eclipses have a long tradition of appearing just before or after major events in US history, including the bombing of Hiroshima in 1945 and the assassination of JFK in 1963? The last time a total solar eclipse was visible coast-to-coast in the US was almost 100 years ago, just after our country entered World War I. The upcoming August 21st event will be the first solar eclipse visible in totality only from the US since the nation’s founding in 1776.

But here’s where it gets really weird. The Great American Eclipse will fall directly on the point that was rising over the horizon at the moment of Donald Trump’s birth. Also, Trump was born on the day of a lunar eclipse. He’s what they call an “eclipse baby,” which seems to be a big deal with astrologers.

Without going into any more detail - and knowing full-well you already think I’m crazy – there are lots of other cosmic coincidences surrounding the Great American Eclipse; too many to ignore, contends astrologer Donna Woodwell. She writes, “This eclipse is the cosmic reflection of what we already know: We are at a crossroads in American history.” She claims that several tipping points are looming: climate change; rapidly-shifting technology (40-60 million Americans are currently working jobs that may not exist in a decade); and the “profound paralysis” of the “us-vs-them thinking” that dominates all levels of society and government.

In short, she says something’s got to give. Or maybe a lot of things. We must break free of the “curse of duality,” she writes -  “the either/or thinking that’s plaguing so much of our discourse at the moment. Rarely is life black and white, either/or.”

(It strikes me as ironic that, these days, you have to look to an astrologer for wisdom this simple and obvious.)

Furthermore, says Woodwell, when seen through the lens of astrology, Donald Trump – despite all his faults (or maybe because of them) - is the right man in the right place at the right time. She believes this eclipse baby was destined from birth to help us face our “individual and collective shadow” at this crucial point in history - to hold up a mirror to our society so we might see ourselves more clearly, see what’s broken and figure out how to fix it.

Poppycock, you say? Pure hogwash? Maybe so. Maybe the ancient art of astrology is utter hooey, and there is truly nothing “written in the stars.” Who knows?

All I know is that something beautiful and astonishing will be happening across our country on August 21st, and for a few wondrous moments, the Big Ugly might release us from its thrall.

And we will all be looking up. Together. 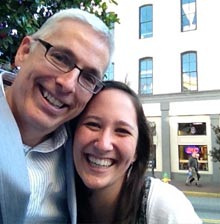 Getting The Word Out