Getting Better All the Time

“If my father were here today, there would be two words running through his head: Good grief.” The speaker at the lectern laughed along with her audience. “Seriously, he’d wonder what all this fuss was about!”

These were the words of Jackie Hollins Lee, who stood before a gathering in the gallery at USCB last Friday. We were there to honor her father, the late James H. Hollins, who was the first African American to attend the university, 50 years ago. A few minutes earlier, we media types had watched Jackie follow in her father’s footsteps, cameras flashing as she ascended the same stairs he’ 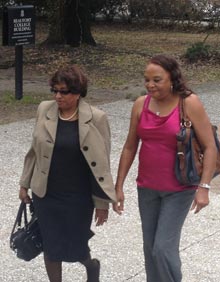 d climbed half a century ago. James Hollins was accompanied that day by six white Marines – his brothers in arms – who were there to ensure that the desegregation of USCB ran smoothly. I am happy to report that it did.

Jackie Lee’s speech on Friday followed several by illustrious members of the community, including historian Dr. Larry Rowland, SC Rep. Ken Hodges, and USCB’s student body president Devin Mock. Their words were reverent and inspiring, befitting the solemnity of this 50th anniversary. But now, here was James Hollins’ elegant daughter – VP of Information Technology for the Federal Reserve Bank of Atlanta – offering a dash of homespun humor. Her father was a humble man, she told us. He didn’t see himself as anything special. To him, mounting those steps to the Beaufort College Building 50 years ago was just a means to improving his family’s lot, and “another day in the life of a US Marine.” At the end of her short speech, Jackie Hollins Lee got choked up. Thank goodness I wasn’t alone.

It was one of those mornings when I really love my job.

It didn’t start out that way, though. An hour earlier, I’d been cranky. It was blustery and gray outside, and this was my column-writing day. My column-writing day is sacrosanct. I’m persnickety. I have rituals. Normally, I hunker down at my home office, banging away on my computer ’til I scare some inspiration out of it, comfy in my pajamas with a coffee mug and some Dove dark chocolates by my side. But not today. No. Today I had to attend a media event at USCB. This meant wearing shoes, lining my eyes, brushing my hair. It meant lipstick and small talk. On my column-writing day. Argh.

But now, here I was. And – my husband will tell you, it almost always happens this way – I was so glad to be here. No, not just glad . . . elated. Ecstatic. Overwhelmed with emotion. I was filled to the brim with love for this woman, her late father, these speakers, USCB, Beaufort, SC, the United States of America, and the whole sweet saga of mankind’s march toward justice, mercy and the fulfillment of God’s kingdom on earth.

Later that night, the sap rose again at Lowcountry Produce, right down the street from USCB. I’d gone to meet my sister, in town from Charleston to watch her mother-in-law Velma Polk sing with the Sweetgrass Angels. Most of you know the Angels by now; Velma sings with Elaine Lake and Penney Smith, and this harmonizing trio is all over the place lately. What a crowd they’d drawn on this Friday evening! And what fun was being had.

The Sweetgrass Angels have a generous habit of inviting audience members to come up and sing – either with them, or alone. My sister was cajoled into soloing on “Sweet Child o’ Mine,” and she killed it. I stole a sideways glance at my 12-year-old’s face, where pride wrestled with pure shock. Apparently, she didn’t know Aunt Cally was a rock star. (It was a very different look from the one I saw on her face later, when Mom joined a bunch of other middle-aged women on the floor for “Dancing Queen.”) A couple of brothers who identified themselves as “gospel singers” joined the Angels for a magnificent rendition of Sam Cooke’s “You Send Me;” they had fat gold crosses swinging from their necks and voices like Marvin Gaye. Local hairstylist Brad Ballington crooned a country tune and had every woman in the place swooning. Probably some men, too.

At one point, I looked around the room and my heart just swelled. Seriously, I felt it burst its tiny cage, Grinch-style. Look at this crowd, I thought. Old white country fans, young black gospel singers, businessmen and artists and plumbers and hairdressers. All laughing . . . all singing . . . all dancing. We were in love. In love with this place, in love with this music, in love with each other.

Why am I telling you all this? How do these two stories connect? Good question. Maybe they don’t.

But here’s what I’m thinking: If you hang out on social media much – Facebook and Twitter and the like – you may be under the impression that racism is on the rise in the United States. I can’t count the number of videos, articles, and other posts I’ve seen over the past few weeks and months, trying to convince me that things are getting worse . . . that this country which abolished slavery, then stamped out Jim Crow, then elected a black president – twice – is moving in the wrong direction when it comes to race relations.

I would like to invite these people to Beaufort, SC. I wish they’d seen the diverse group at USCB last Friday, seen the tears streaming down faces, both black and white, as Jackie Lee talked about her father, his white Marine Corps buddies, and the praise he’d had for the USCB faculty and students, whom he called “open and accepting,” all those years ago. I wish they’d been at Lowcountry Produce Friday night, seen the crazy-quilt of a crowd, felt the happy vibe. I wish they could spend a day with my daughter in her 7th grade class, where she has black friends and white friends and friends of indeterminate race . . . and it’s simply not an issue.

It’s easy to dig up negative anecdotes, examples of people treating other people badly. It may be satisfying, on some level, to make “gotcha” videos, catching people in the act of being jerks, proving that racism still has some purchase in our society. (There will always be jerks in this world; mark my words.) Who knows? Maybe these videos help raise awareness and actually do some good. For me, what they mainly do is contradict what I see here “on the ground” in my small Southern town. So I wanted to share a couple of my own anecdotes. That’s all.

In honor of another recent 50th anniversary, I think I’ll let the Beatles sum up my thoughts on the subject of race relations. While there is certainly still work to be done – we should always be improving – I have to admit, it’s getting better . . . a little better all the time.

Ring in the Old