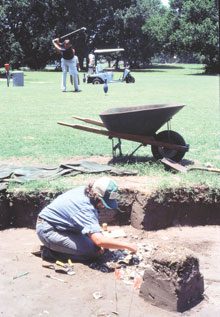 Is the long lost capital of Europe’s first colony located on Parris Island?

Two forces came together between 1974 and 1980 that put a spotlight on Santa Elena and Parris Island. First, Dr. Eugene Lyon published his book The Enterprise of Florida. For the first time, the role that Spain and Santa Elena played in the permanent settlement of North America is revealed.

Before that, a small group of Florida historians had begun to read Spanish documents in the mid-1920’s, and these documents pointed to Parris Island as a major hub to Europe’s settlement of what is now the U.S. In light of this, and Dr. Lyon’s revealing book, National Geographic sees a significant story. Their editor, Joe Judge organizes a meeting with Bob Stephenson, Director of the South Carolina Institute of Archaeology, and his archaeologist, Stan South. Together with Dr. Lyon and Dr. Hoffman, this team visits the site of the old fort that Major George Osterhout claimed as “French” in 1923. Their task? To determine if this site was French – and therefore the famous Charlesfort – or perhaps the even more important Spanish town of Santa Elena. The group met in the fall of 1978 and came to one consensus opinion: The fort was Spanish. Proving that it was Santa Elena – located on Parris Island – would take even more evidence.

With this consensus opinion, the Parris Island Marine Corps commander, Brigadier General E. H. Simmons, gave Bob Stephenson every indication that a request to open the site for an archaeological dig would be approved. With that expected support, Stephenson then asked the National Geographic Society for funds to proceed. Their response was a Catch-22. National Geographic would only advance funds if Bob Stephenson could show them evidence that Santa Elena was on the island. In other words, the South Carolina Institute of Archaeology had to first do a small-scale “dig” to show the evidence that was needed to do the expanded “dig.” Stephenson asked Stan South how much time he needed at the site to dig up such evidence. Stan said, “At least one week.” With that knowledge, Stan South and Bob Stephenson approached the University of South Carolina and asked them for the funds to do a mini-dig for one week. They asked for $842. That included two motel rooms (one for Stan South and his “drafted” family), and another for the remainder of the crew – plus per diem for one week.

On July 1, 1979 archaeologist Stan South went to the site of San Marcos with his wife, Jewell, and their three children, David (age 29), Robert (age11) and Lara (age10). Joining their small work crew were Darby Erd and Sue Jane Alsing. It took the Stan South team one week to determine whether Santa Elena was on Parris Island. Here are a few excerpts from Stan South’s diary:

“The team meets at the site of the famous fort. Our goal is to test the idea that the site identified by Osterhout in 1923 is either French or Spanish. Is it the French Charlesfort of 1562? Or is it actually Spain’s Fort San Marcos of 1577 as claimed by Dr. Paul Hoffman? We are searching for Santa Elena and some evidence that the island in front of the site is that of Ft. San Felipe, an earlier fort than San Marcos, built in 1566…built before the Pilgrims landed at Plymouth Rock.”

“My research design is to dig forty-two three foot squares on a grid 90 by 420 feet in size. My plan is to discover the concentration of Spanish pottery, and particularly fired clay daub, that we assume will be present at each burned home site in Santa Elena.”

“Found Spanish majolica in all four holes we excavated today. We are all highly excited by the success of the discovery of Spanish pottery in all homes tested so far.”

“Helen Haskell and Jim Scurry met us at the site to volunteer. We continue to find Spanish and Indian material in all but one square. The prospects of the site being that of Santa Elena are good. We have finished 10 total squares. We hope to complete an average of 6 squares per day so we can end the project this coming Saturday afternoon.”

“Tonight I plotted all of the transit shots from the first four days of work. The results look like the sketch of one of the forts that was found in the Archives of the Indies in Seville.   It looks like Fort San Felipe II…the one that Dr. Paul Hoffman says is on Santa Elena. The angles match. The excitement over discovery of the fort has overshadowed the continued excavation of the three-foot squares. Tomorrow our main push will be to locate a bastion of the fort.

“Fort San Filipe, the ‘old fort which was lost’ has been found! As soon as we find a bastion I will call Bob Stephenson, Joe Judge, and Paul Hoffman so they can share in the excitement.”

“We completed digging and sifting the 42 test squares. We found the ‘old fort which was lost,’ San Felipe II (1572-1576). We also want to shoot and plot the location of the San Marcos fort on the same map as Fort San Felipe. San Marcos now has a companion fort on Parris Island, with a handsome moat. The town of Santa Elena is here!”

On July 12, 1979, the National Geographic Magazine made a public announcement of their findings from Washington, D.C. Outside of this select group of historians were two interesting people – the Commandant of the Marine Corps, General Robert Barrow, and the science editor of the New York Times, Mr. John Noble Wilford. The next day Wilford published this heading in his two-column report in the Times. “The site of the long lost colony of La Florida has apparently been found in the rough next to the Parris Island Golf Course on Parris Island, S.C.” This story is repeated in all of the major South Carolina newspapers. But it does not go any further. For all practical purposes, says Dr. Hoffman, “the secret story of Santa Elena is only known by a small handful of specialized 16th century historians.” Not enough of the story has surfaced to grab the attention of the American public.

At this point only a few historians know that Parris Island may hold the capital of the first European colony. More importantly, no typical American citizen knows anything about the incredible story behind Santa Elena. That begins to be unveiled in 2012 as a spin-off of a story that focuses on our high homeowner’s insurance rates.

In next month’s issue: How the Santa Elena story is rediscovered and how the story expands.

My thanks to three of the most important scholars for their input into this report – Dr. Eugene Lyon, Dr. Paul Hoffman, and Dr. Chester DePratter. All of them are members of the Santa Elena Board of Advisors.