“The Southern belle (derived from the French word belle, ‘beautiful’) is a properyoung woman of the American South’s upper socioeconomic class.” – Wikipedia

“Being both soft and strong is a combination very few have mastered.”  – Boomsump.com

“Life tried to crush her, but only succeeded in creating a diamond.”

I am sitting in a lovely Quincy, Massachusetts apartment just south of Boston with a beautiful southern exposure.  I am writing this on Pearl Harbor Day, December 7. Pearl is located on Oahu Island, some 4,738 miles south of the North Pole and 1,481 miles north of the equator. It is the third largest of the Hawaiian Islands, home to about a million people, and includes about two thirds of the population of Hawaii.  Oahu lies south of Key West and most of us probably think of it as a tropical island.

The official death from the surprise Japanese attack on Pearl was 2,403.  Most of these, 2008, were Navy personnel.  We also lost 109 Marines amidst the horrific devastation. Overwhelming, these were young men in their prime, enjoying a dream assignment in paradise. By contrast, the United States is now losing more citizens to Covid-19 per day than we lost at Pearl; in both cases these stand as national catastrophes with ungodly loss of life. Just for reference, we lost 2,977 people on 9/11. The rolling seven day average for Covid is rapidly approaching that ghastly number.

Against this horrific backdrop I often sit on my fourth floor balcony peering down onto the sidewalk. Many if not most of my neighbors are Millennials, and an astounding percentage of these young people have dogs. Lots of puppies, including a gorgeous little girl Dalmatian. She is so energetic and bouncy, her tail motoring at 90 miles an hour, that it’s a stretch to envision her as much of a Southern belle in the near future. Or a Northern belle, for that matter. Her sheer exuberance over taking a walk with her owners gives me ever more faith in God and the kindly forbearance of so many of our fellow humans. It’s easy to push the daily news barrage to the back of my mind and thank heaven for those little breaks.

A relative rarity up here as a former southerner, people sometimes ask me what I miss most about Lowcountry life.  Several musings come to mind, drifting aimlessly through the right hemisphere of my 70 year old brain.  All are lovely, driving a wistfulness that sometimes takes a CNN or Wall Street Journal vacation.  But my beautiful southern bells will always ring.

Recollections of the endlessly winding tidal creeks and rivers are inescapable.  Our house was on Jenson Creek on Saint Helena Island.  I often used the sink on our dock to fillet the endless trout and redfish I pulled up from the Morgan River, often between dock pilings.  The minute I returned home carrying a bucket, my glorious wife Jane would ask, “Wudja get, Jackie?”  When the fish or the weather weren’t cooperating, there was always a heaping pail of luscious blue and stone crabs. Our little Yorkies would sit at my feet as I cleaned them, ever alert for a quick snack from dad. Often I would offer them the claw meat and never heard a complaint. Nor an apology if they managed to nip my fingers.  “Youch you guys!”

When the fish overflowed my bucket, I always loved to deliver bags of fillets on my bike to friends and neighbors. If our lemon tree was bearing fruit, a lovely Meyer tagged along. Sometimes my recipients would rustle up a bag of cookies, brownies or homemade pesto (special shout out to Nan Foley!) in exchange.  A simple thank you was always enough for me.  A barterer I was not.

Southern barbeque was always a self-acknowledged weakness.  Driving home from the grocery store on Route 21, my head always bent in the unmistakable direction of a tiny mom and pop joint, the enticing smell of smoke and baby back ribs hooking me like a yellowfin tuna searching for a sashimi lunch and instead feeling the sting of a fisherman’s hook.  It was often nearly impossible not to pull over, savor the smoky air, then waft in on the angelic aroma.  “Hi folks, have you got some ribs for me today?  Great, any cornbread or coleslaw?  Terrific, and what’s that in the dessert case, bread pudding?  Yes ma’am, may I have two please?”  “Sure thing young man, coming right up!”  I always liked to pay cash, keep things simple.

And speaking of southern food, I miss neighborhood get-togethers that included deviled eggs, shrimp and gumbo. Maybe someone would think to bring some Creole dish, homemade cornbread with kernels of corn poking out, or a pecan pie.  The pie always seemed best with an oversized scoop of vanilla ice cream.

Can’t forget the oyster roasts. Full disclosure… I have always preferred these delicacies on the half shell with cocktail sauce and a lemon wedge. But the real joy of a southern oyster roast, at least for this Beantown boy, was floating on the soft cloud of the banter, good humor and openness of spirit that was always present.  It felt like watching a favorite old movie, the kind where you’ve memorized some of the dialogue but it always feels somehow brand new. Maybe “Gone With the Wind,” or “Thelma and Louise.” Perhaps “Casa Blanca” or “Planes, Trains and Automobiles.” And where exactly is John Candy when we need him most?  Clark Gable. Vivian Leigh. Olivia De Havilland. Now with Scarlett O’Hara we had a true southern belle. Mmm.

Just a few words on my latest obsession. In our Lowcountry days, Jane and I loved keeping birdfeeders outside her office window. We had the usual assortment of local flyboys and girls and the occasional hummingbird, always a special treat. In the creek behind the house we enjoyed watching the stealthy herons and egrets, always on the prowl for a seafood morsel. There were mussels in the mud but we never saw anything looking like a kill shot, except when our son Jack’s visiting friends went down there with small shovels and a bucket. Plenty of hawks patrolled the sky, and his brother Greg once alerted us to one soaring off with a flounder in tow.  About the best we could do was mutter “wow.”  In thirteen years of Lowcountry fishing, I caught less than a dozen of them.

This fascination with waterfowl hitchhiked with me up to Boston after Jane died.  My current favorite species to study is the grebe, appropriately nicknamed “helldiver.” They paddle around Boston Harbor, cocking their beautiful heads on lookout patrol. Usually before I can snap a picture, they make a sudden vertical dive.  Heaven knows where Gretta or Griswold will surface… or when.  It might not be for a half minute or more and fifty yards away. When one resurfaces with a fish in its beak, I always cheer for them.  “You go girl!” (or buddy.)

They always remind me of the Lowcountry.  Traditional, yet always on the move.  Always quietly efficient and graceful, beauty in motion.  If they had little bells on their necks, I know what they’d be playing.

Be safe and well, y’all!

The Long History of “Made in China”

Fishing (or maybe not) in the ACE Basin 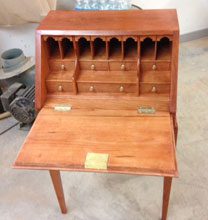