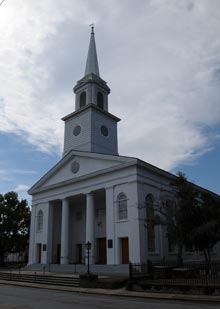 You’d never know it from the unassuming façade, but the Baptist Church of Beaufort is no ordinary place of worship. The ceiling of the sanctuary is a stunning work of art featuring molded plaster leaves and rosettes handcrafted by skilled slave artisans more than 165 years ago.

“People are just amazed when they see the inside of the sanctuary,” said Judy Copeland, docent coordinator for the church. “It’s really quite lovely.”

Almost all of the plaster work is original. As part of a major restoration of the church in 1997, the 32-foot high ceiling and walls were repainted in seven historic shades of white, enhancing the beauty of the decorative artwork.

One of the finest examples of Greek Revival architecture in the country, the church will be featured in the Parish Church of St. Helena’s 55th Annual Spring Tour of Homes being presented from 5:30 to 8:30 p.m. April 8.

Along with the Baptist Church, guests will have the opportunity to tour six historic homes in The 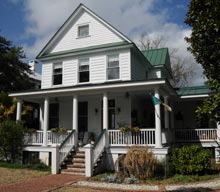 “These are some of the most magnificent homes on Bay and North streets,” said Leigh Ward, co-chairman of the Spring Tour of Homes. “If you’ve ever wished you could see what’s inside, now you have your chance.”

The evening will begin in downtown Beaufort with a tour of the Parish Church of St. Helena. Built in 1724 from brick—much of it originally used as ship’s ballast—the church served as a hospital during both the Revolutionary and Civil wars.

Union forces stripped the church of its furnishings and brought in marble tombstones to use as operating tables. Today, only a small marble font remains of the original furnishings.

In much the same way, the Baptist Church of Beaufort served as a Union hospital for black soldiers. Graffiti left by the soldiers was uncovered on the interior wall facing the river during one of the renovations.

“It was written with lead pencil,” Copeland said. “We left it uncovered so you can see their names.”

The homes on the tour are just as fascinating. Edward and Trudy Stevens’ Bay Street house was built by William Ritchie, a Civil War foot soldier from Upstate New York who returned to the Lowcountry to live out his life in Beaufort. When the Stevens bought the home three years ago, it was in total disrepair.

“We walked in the house and fell in love with it,” she said. “It had so much charm. It reminded me of my grandmother’s house.”

The couple gutted the house and began a major renovation and addition that included a new master bathroom, kitchen, back deck and wrap-around porch. During the restoration, they discovered a coal-burning brick fireplace in the dining room that had been covered in plaster.

Determined to save as much of the original materials as possible, they repaired and patched the heart pine flooring throughout the house using wood they found in the attic. Three studs taken from walls were turned into a mantle for the living room fireplace.

But it was the windows that turned out to be one of the most tedious and time-consuming projects. The Stevens sanded all 15 windows down to the bare wood, removed the glass and re-glazed it.

“When we first started, it took us 45 hours to restore one window,” Stevens said. “Fortunately, we got better as we went along.”

Tour participants will be given a map at the start of the tour and can visit the homes at their own pace during the evening. Docents will be stationed at each house to answer questions and share details and stories about the homes.

Tickets to the house tour and garden reception are $40. For more information or tickets, call 524-0363.

Pictured above, left: One of the finest examples of Greek Revival architecture in the country, the Baptist Church of Beaufort will be featured in the tour along with six historic homes.

Right: Edward and Trudy Stevens’ home was built by William Ritchie, a Civil War foot soldier from Upstate New York who returned to the Lowcountry to live out his life in Beaufort.

Beaufort Homes For The Holidays