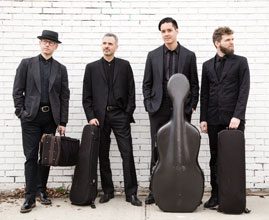 There will truly be something for everyone during the next USCB Festival Series Chamber Music Concert, when Brooklyn Rider blazes onto the stage. Like classical music? How about something tuneful from the 18th century and something emotionally-charged from the 19th? Or maybe you like the latest cutting-edge rock? Brooklyn Rider does it all!

The Pittsburgh Post-Gazette says, “They are four classical musicians performing with the energy of young rock stars jamming on their guitars, a Beethoven-goes-indie foray into making classical music accessible but also celebrating why it was good in the first place.”

Strings calls them “the future of chamber music,” saying that “Brooklyn Rider offers eclectic repertoire in gripping performances that continue to attract legions of fans and draw rave reviews from classical, world, and rock critics alike.”

This will be a happening as much as a concert!

Starting with a 1789 quintet by Luigi Boccherini, the quartet is joined by Festival Series program host and cellist Edward Arron. Ed is no Johnny-come-lately to the music of Brooklyn Rider as he and the quartet’s second violinist, Colin Jacobson, first played together when they were nine years old. Beethoven is then represented with his fiery and intense String Quartet in f minor, Op. 95. Written in 1810, it is named “Quartetto Serioso,” a rare instance in which Beethoven himself bestowed the subtitle. It is the final, most compact, direct, and short, middle quartet.

Brooklyn Rider then jumps two centuries to our own. They recently finished a tour with choreographer Brian Brooks and former New York City Ballet prima ballerina Wendy Whelan. One of the works was a new composition from Brooklyn Rider’s Colin Jacobsen – an intimate series of duets and solos featuring Brooks and Whelan with live onstage music of the quartet as a dynamic and central creative component.The piece, titled, BTT, combines the aesthetic of two seemingly incompatible visionaries: the great musical architect, Johann Sebastian Bach, and the great chaos-creating radical, John Cage. Looking below the surface, however, Cage created a set of rules for his musical experiments, then set them in motion and watched the results. Bach took forms, poured his creativity in and listened as the music naturally unfolded. Jacobson takes the musical spelling of their last names, B-A-C-H (the pitch B-natural in German) and C-A-G-E-(D). The two motives interact in a variety of ways; sometimes contradicting each other, sometimes in harmony, but always interesting. The performance concludes with a multi-national collage of updated or recently created tunes and songs gleaned from working with musicians who are outside the classical music sphere; Heimlaus and Rekveen (Norwegian traditional), Heavy Tree Gap (Australian Padma Newsome), Show Me (American Aoife O’Donovan), and Five Legged Cat (Venezuelan-American Gonzolo Grau). The New York Times previewed these types of collaborations for a Brooklyn Rider Carnegie Hall performance: “Not only is the music from these ventures engrossing, satisfying and fun, it also enriches the way the ensemble plays the core chamber repertory. To borrow a term from the world of sports, this isn’t crossover. It’s cross training.”

Come hear what all of the fuss is about. Information and tickets are available on www.uscb.edu/festivalseries or 843-208-8246, Monday through Friday. The performance is at the USCB Center for the Arts on Sunday, December 11, 5:00 pm. 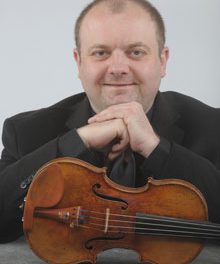