“I want Lea to hear the story from you.”

A few weeks ago, I gave my goddaughter a ring my mom bought for her mother, and passed along to me. I want the ring to move through the generations of women directly descended from Marie Sullivan. The links in our maternal blood chain include my mother Irene, me, my sister Stacie, and her daughter Lea.

Lea is graduating from Ithaca College majoring in speech pathology. She will go on to graduate school and may focus her studies on aphasia, a language impairment commonly associated with head injury or stroke, and resulting in difficulty remembering or forming words or in a complete loss of speech. However, passing the ring was not on the occasion of Lea’s graduation. It was at the conclusion of a much longer journey – a young lifetime of dance.

Lea has been dancing just a bit longer than she has been walking. A master in ballet, tap, jazz, and hip hop, Lea’s repertoire for wordless movement is vast, and full, and possibly over. My sister Stacie has been with her every learned and rehearsed step of the way, and there was a time when Lea contemplated going to California or New York in pursuit of the stage, but callings change, and it is a good bet that the world will receive her best gifts of time and talent when she helps people recover their voices.

The ring is close to sixty years old, and the centerpiece is a blue star sapphire set in swirls of silver with two small diamond chips balancing the setting. The stone is a pale sky blue, almost opalescent, and when the sun or any light hits the gem just right, a beautiful, crisp white star – an asterism – appears and moves with each twist and turn of the ring bearer’s hand. In its essence, the ring is a sort of concrete expression of movement set in metal and minerals.

My decision to pass on my grandmother’s ring was not only to congratulate my niece for last dances and academic achievement; it was based on the fact that my mother, Lea’s grandmother, was present. Even though I had heard the story of the star sapphire before, I wanted my mother to share it with Lea. I wanted Lea to hear the words from the author, not from me. And the story goes…

When Irene graduated high school (she did not go on to college and her mother only went as far as the eighth grade, leaving school to work in a Pittsburgh glass factory), she started working in the mailroom at West Penn Power, and eventually moved up through the treasury department to payroll clerk. Wanting to do something extravagant for her mother, she bought the blue sapphire ring on layaway, saving and paying a little bit of money each week until the DeRoy Jewelers debt was settled, and the ring was hers to give away.

When I took the ring off of my finger at The Ale House on the Commons in Ithaca, I asked my mom to tell her story about the ring. She told us it was something she worked hard to buy. Her mother did not wear any rings, and her hands were rough and tough from years of hard work as a cook in a high school cafeteria. She did not wear rings, and Irene did not recall any wedding band, but my grandmother wore the blue sapphire.

As we considered the piece of jewelry over half-eaten salads and remnants of onion rings, we realized that Lea and her great grandmother Marie were both born in September and shared the sapphire as their birthstone. What I witnessed at that dinner table was the weave of generations of women, each one rising above the other like the brilliant star in the middle of that ring. In the small circle of the four of us were mothers and daughters, aunts and godmothers, sisters and a grandmother. It was the perfect time to pass on and let go.

As a tribute to her mother, Lea choreographed a duet to the Dar Williams song The One Who Knows for this last recital. I don’t know the exact story, but I believe that on that first trip, when Stacie dropped her daughter off to begin her freshman year in college, she heard the song by accident, or coincidence, or Providence. The lyrics of the refrain are:

You’ll fly away but take my hand until that day

So when they ask how far love goes

When my job’s done you’ll be the one who knows.

If I’d held on to that ring, the legacy would have ended with me. If I’d waited to give it to Lea, her grandmother might not have been there to tell the story; I would have had to tell it and the voice would have been secondhand.

The clichés are all there – the ring, the circle of life, and the generations sitting together around a table over a shared meal. But I want to focus on the star, on the light that is passed from one generation to the next, on the hard work of the women around me, whether it be in school, or in jobs, in creativity or self-sacrifice, in generosity and in the never ending challenge to let go, give away, and give back.

So far, there are four generations in the iris of a sapphire stone. I can only ponder the caliber and potential of the fifth. I bet she will be a shooting star.

Mud Snails to the Rescue! 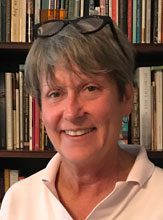