I haven’t been getting out much lately. No reason, really; just not in a social mood. I’d planned to rally last week, do some serious hobnobbing, but then the rains came, giving “Water Festival” a whole new meaning and me an excuse to mostly stay put.

(By the way, my hat is off to you stalwarts who threw that epic shindig in spite of the daily deluge. Way to persevere! Respect, Madam Commodore. Respect.)

The downside of being antisocial is, of course, social media – the tendency to consume more of it. I need that like a hole in my head. In fact, I often ask myself: Which came first, the antisocial personality disorder or the social media? I suspect I know the answer, but I don’t want to think about it too hard. (I don’t want to think about wine too hard, either. Capiche?)

So anyway, instead of relishing music and moonlight and the laughter of flesh-and-bone friends last week, I sat in my pajamas and surfed Facebook. For those who haven’t been there lately – say, you actually went to Waterlogged Festival, or took a family trip, or engaged in some other normal human activity – consider this another dispatch from your friendly cyber correspondent. Much like my pals at Southern Carpet Wholesale with their frequent excursions to Dalton, I go to Facebook so you don’t have to. It’s kind of my “beat” these days.

Latest developments? They’re definitely making a show of tightening security and cracking down on “fake news.” But what interests me most is how people’s public timelines are changing. They seem to be growing more trivial and boring by the day – cat videos, vacation pics, inspirational quotes so banal they could be cross-stitched above your grandmother’s door – except for the timelines of people completely immune to insult or supremely confident of their righteousness. Alas, I am neither, so I’ve been posting a lot of bird photos.

I would like to believe that these kinder, gentler timelines reflect a kinder, gentler time in our nation’s history, but clearly that’s not the case. What’s happening, I think, is that more and more people are migrating to private – sometimes even “secret” – FB groups, where they hang out with other like-minded souls that they trust. Gone are the days when you could host a spirited, nuanced discussion about politics on your public timeline, reasonably certain that one of your friends wouldn’t call another of your friends a Nazi.

Much has been written about the Trump Effect. Early studies correlated a rise in school bullying with the rise of Donald Trump before he was even elected, and according to a January 2018 article in Psychology Today, “the definition of the Trump Effect has expanded to include religious and racial bullying by adults as well as: misogyny, sexual assault, and other socially unacceptable behaviors.”
The article continues, “To be clear, bullying is not a partisan issue; it is a behavior described as the use of power through strength or influence to intimidate another.”
Indeed. And in light of that definition, can we please acknowledge a kind of psychological bullying – a silencing through intimidation – that was happening long before there was something called the Trump Effect? Can we admit that, in some sense, Trump is the effect? This communication breakdown between Americans started long before Trump came along, and in many ways, his presidency is an effect of that breakdown. That doesn’t mean it’s not also now a cause, making everything a hundred times worse. Which came first, the chicken or the egg? I’m not even sure it matters anymore. We no longer understand or respect each other. We hold each other in contempt. We are broken.
Y’all know I have a perverse, masochistic streak that compels me to stretch myself across that brokenness like some crazy, desperate bridge over troubled water. For years now, I’ve entertained the prideful notion that if I could just read enough and listen enough and write enough essays, I could single-handedly explain one political tribe to the other – and vice versa – in a way that would bring about mutual understanding and appreciation. I thought I could make Republicans and Democrats see each other as yin and yang – worthy, respectable rivals engaged in a healthy competition that’s ultimately good for the country – instead of hideous foes locked in a death match between the forces of good and evil.
And I would do all this from my little breakfast nook/office in Beaufort, SC, in my yoga pants, with a cat in my lap.
Well, the Trump Effect has made this cockamamie quest damn near impossible. It’s just about worn me down. Consider my spirit well and truly broken. But don’t think that bodes well for our republic. When even Pollyannas like me give up on holding the center, Lord only knows what rough beast is slouching its way toward Bethlehem and yada yada yada . . .

After Helsinki and the media frenzy that followed, a progressive FB friend gloated on his timeline, “My Trump supporting friends are all suddenly very silent.” I responded, “Their silence may not mean what you think it means.” I was referring, of course, to the secret enclaves, where people can speak openly about their support for Trump without being called Nazis. Believe me, those groups exist. I know, because I’m in one. I’m also in a Pantsuit Nation group where people are still mourning Hillary and looking forward to the Blue Wave in November. (I get around. It’s a compulsion.)

The difference? The Pantsuit Nation folks say the same stuff in public that they say in private. Everybody else? They’re talking honestly in private while posting pictures of their beached feet in public.

There is a reason so many Americans were stunned when Trump won the election. Suffice it to say, I was not one of them. Because people tell me things. Things you will never hear if you keep to one bubble. And what I can tell you is this: We now have a national discourse, an “atmosphere” created by Big Media and social media, in which only Trumpist trolls and Trump resisters feel emboldened to speak openly. Everybody else – the cautious, the uncertain, the moderate, the undecided, the polite, the not-that-political, the just-plain-Republican, the fence-sitting-till-November, and even some fed-up liberals . . . they are turning away from the public debate in droves.

But they are out there. And they vote. Resisters, forget the Trumpist trolls. They’re loud and obnoxious, but they’re not the norm. If you hope to persuade all those other folks – average Americans who have mixed emotions about Trump – you should really stop describing them (i.e. anybody outside the Resistance) as Nazis, bigots and xenophobes on your public timeline. They may not be talking anymore, but they’re listening, and you’re not winning them over. In many cases, you’re actually driving them straight into the arms of Donald J. Trump.

(I know this. People tell me things, remember?)

If you’re comfortable expressing such disdain for your fellow Americans – because you never get pushback from anybody you like – that’s your choice. But just don’t assume there is no pushback. Otherwise, you might be in for another unpleasant shock in 2020. And it might be one of your own making.

There are better ways to win friends and influence people than by shaming and insulting them. I hear Dale Carnegie wrote a whole book about it.

The Year of Living Dangerously 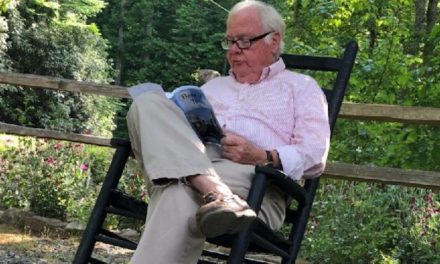 The Call of Fall