What would you do if this happened to you?

A couple of Fridays ago, I was sitting in my car outside Studio B on Greene Street, waiting for my daughter to emerge from dance class. It was sixish and dusky, and I was reading on my phone, when a moving shadow caught the corner of my eye. I looked up to see a man with a neat beard and a nice smile; he waved and signaled me to roll down the window. Assuming he was a dance dad with a question, I complied without a second thought.

I didn’t recognize him, but I’m southern, and would rather shoot myself in the head than appear rude, so I replied, “You look so familiar! How do we know each other, again? You’ve got a daughter in dance, right?”

“No,” he said. “I used to live here, but I moved to Charleston years ago. I’ve just moved back.” Then he began detailing his former life in Beaufort, peppering his account with names of people and places I recognized. Said he was a musician – a professional piano player – and that I’d surely seen him at one event or another over the years.

“Yes, of course… that’s how I know you! I’ve seen you perform. Good to see you again! Are you happy to be back in town?”

This is when our breezy chat took a turn for the serious. “Actually, things are really bad right now,” said the man. “It didn’t work out for me in Charleston, and I’ve lost everything. I’m absolutely destitute. I’ve been living on the street for three days…”

Oh dear. Charming Southern Girl had not seen this coming. She was flummoxed. What did one say to such a confession? Southern charm suddenly seemed . . . inappropriate.

“I’m so sorry to hear that,” I said, trying to make a graceful shift from pleasant chitchat to empathetic concern. “These are such tough times. My family and I have been struggling, too.”

Ugh. This sounded so lame. It was true – we had been – but here I was sitting in a decent car, reading on a smart phone, waiting for my daughter to finish her dance class so we could go home and have supper. “Struggling” suddenly seemed a ridiculously relative term.

The man held up what appeared to be a hotel keycard. “By the grace of God, I have a place to stay tonight.” He told me that one of our downtown churches – a church I know well – had gotten him a room at the Comfort Inn. It warmed my heart to hear that. But why was he sharing this story with me? Did he really think we knew each other?

“I’m too old for this,” the man continued. “I’m 52 years old and I’m living on the streets. And it’s so very hard to ask people for help. But I know there’s no shame in asking for help when you need it, and I hope that if the shoe were on the other foot, you would ask me for help.”

I was genuinely moved by this man’s plight . . . and especially his courage in approaching me. Yes, it would be hard ask for help. It is hard; don’t I know it. I was touched by his vulnerability.

What did I have in my purse, anyway? I couldn’t remember. Oh, right. I had a $20 bill. Period. One twenty to get me through the weekend. My walkin’ around money. Sure, there was more where that came from; but not much. If only I had two tens . . . or some fives. But it was a twenty, and it was all I had. You can’t ask a homeless person for change, can you? That isn’t good form, is it? (Oh, shut up, Charming Southern Girl . . .)

Dammit. What kind of Christian was I, anyway? I made a decision. I was reaching into my purse, prepared to give him the twenty . . . when the other shoe dropped.

“I’m not asking you for money,” said the man. “I’ve been on my feet for three days and nights, and I’m exhausted. What I really need is a ride to the Comfort Inn.”

I looked at this man, with his friendly face and his sad story. He knew people I knew – even a priest! – or so he said. He was a piano player, a maker of music. He had such a nice smile, and his beard really was quite neat.

But I didn’t know this man. He was a stranger. And I was scared.

“I’m so sorry,” I began, with what I hoped was a look of regret on my face. “I couldn’t possibly leave right now. My daughter will be coming out of dance any minute, and I can’t just . . .”

Before I could finish, he had turned away, flipped his hand at me – as if he were brushing a speck of dirt from the universe – and was trudging off down Greene Street toward Charles, without a look back. It was a shocking departure after such an intimate conservation, and as I watched the man disappear into the dusk, my cheeks were flushed with shame. Or was it anger? I wasn’t quite sure.

This man, who’d seemed so humble and kind, had thrown me with his abrupt, disdainful dismissal. I felt confused. Insulted. Even humiliated. I had been judged and found guilty. I’d been misunderstood. Or had he understood me all too well?

And, of course, there was a third possibility: Maybe the misunderstanding was on my part. Maybe I’d almost been had.

Was this man who he appeared to be? Was he a genuinely good guy, down on his luck and in need of a friend? Or was he a nefarious grifter, preying on gullible dance moms in cars? Again, I wasn’t sure.

But the question that kept troubling my heart was this: Was I who I appeared to be . . . or who I hoped to be, anyway? Was I the generous, brave woman of my imagination – willing to help a stranger, to be a good Samaritan, to love my neighbor as myself? Or was I just a Charming Southern Girl, good for some pleasant chitchat – and even some empathetic concern – but tightfisted and fearful deep down inside . . . and ultimately lacking in faith?

I shared this story with my husband and a few friends, later – it was weighing on my mind – and everyone readily agreed I’d done the right thing, that I had nothing to feel guilty about. “You can’t just put a strange man in your car,” was the common refrain, along with, “You can’t give ’em money . . . they’ll just spend it on drugs or booze.”

But they didn’t know this man. They hadn’t seen his nice smile or his twinkly eyes. They hadn’t heard his story or felt the sting of his rebuke.

And they don’t know me as well as they think they do, either.

Love in the Time of Coronavirus 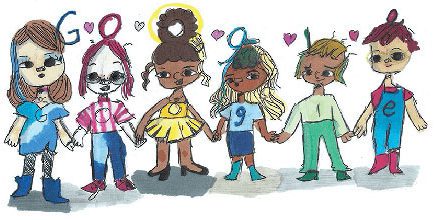 Ode To a Google Doodle