Last issue, something I saw on Facebook got me noodling on the notion that plants might feel pain. Though that theory didn’t exactly pan out, I did learn something about plants that kind of blew my mind: They communicate with each other! Many of you already knew this, but I’m a notoriously late bloomer. Pardon the pun.

A few days after that column hit the street, I received emails from two different readers suggesting I might like The Overstory, the 2019 Pulitzer Prize winning novel by Richard Powers that explores the secret life and language of trees. Weirdly enough, I had started reading the book the day before those recommendations hit my inbox. And only because my book club had decided to read it the night before that.

The upshot is that I’m now about 2/3 through The Overstory, and reading this book is all I want to do. Deadline is upon me, so I must write. But sitting here at the keyboard feels like a frivolous waste of time when there is important work to be done – like finishing The Overstory. Especially since I suspect it will change the way I see – and write – forever.

Yep, it’s one of those books. They only come along every so often, but when they do, nothing is ever the same again. They expand your vision permanently… leave growth rings on your soul.

I got a press release last week from Barnes & Noble, that, while somewhat self-serving (I thought) was nevertheless heartening. According to a recent study of 1,500 adults, “a large majority of American readers (80%) plan to put away their cell phones to focus on reading this summer. Of those expressing the desire to make reading a priority, many have vowed not to look at their phones for between 30 minutes and two hours during each reading session.”

“The survey, conducted in early May, also showed nearly 90% of parents with children between six- and 17-years old plan to ask their youngsters not to use electronic devices like cell phones and video games during certain periods of time during the summer. Of those, 44% said they want their kids to be device-free for more than three hours; 21% would be happy if their kids were off phones and videos for one-to-two hours a day.”

Once I got past the shock of those ridiculously low expectations – “device-free” for one-to-three hours a day is the best parents can hope for, now? – I was touched that people were setting goals for reading books. They inspired me. I decided to follow their lead.

It’s not that I don’t read a lot already. Lord knows I do. But I’d be lying if I said my own “devices” haven’t drastically cut into the time I spend with books. I tell myself that reading news articles, journal essays, and opinion pieces is an important part of my job as a columnist and editor – and this is true – but reading books seems like an important part of my job as a human being. I need to find a better balance in my reading life, because – as I’ve been reminded this week – nothing can replace a good book.

I’m not sure The Overstory is really a summer book, though. Somehow, we’ve decided that summer is a time for light, frothy, fun books. Those things we call “beach reads.” And there’s nothing wrong with those! Hey, I can be as light, frothy and fun as the next guy…

But The Overstory’s got me thinking about those other books. The ones, over the years, that irrevocably changed my worldview – which, incidentally, is still a work in progress. (Does one ever settle on a worldview? Ask me in about thirty years.)

I’m thinking of books like Mere Christianity and The Screwtape Letters, by C.S. Lewis. The first gave me nothing less than a way to believe in God again. The second just may contain all the wisdom about human beings that a human being ever needs – in a delightfully slim volume.

And then there’s Franny & Zooey, by JD Salinger. This book taught me the life-changing secret that “Seymour’s fat lady” (i.e. the most reprehensible creature you can imagine) is, in reality, “Christ himself.” Talk about scales falling from my eyes. Forever changed.

To Kill A Mockingbird, by Harper Lee: Still as full of truth and grace as it ever was. And don’t let them tell you Atticus isn’t woke enough. (Judge not an old book according to contemporary standards, lest ye be judged by future generations according to theirs.)

Charlotte’s Web. This children’s book by EB White teaches me something new every time I read it. Last time around, what grabbed me were the final lines: “It is not often that someone comes along who is a true friend and a good writer. Charlotte was both.” I think there’s deep insight in this statement. In my experience, many writers tend to be standoffish observers who have a hard time fully engaging in life. As for me, I often find it easier to open up to the blank page than to the person sitting across the table. True friendship – with its vulnerability, its intimacy – doesn’t come easy for me. But I am trying to be more like Charlotte.

I Saw Satan Fall Like Lightning, by French anthropologist Rene Girard, is a strange entry that I’ll never get anybody to read. But his Mimetic Theory – his grand theory of desire and imitation and human relations – has radically changed the way I view the world. Once you see it, you can’t unsee it. It simply is.

The Prince of Tides: I’m not sure this one changed my worldview, but it sure did change my life. Long before I ever met Pat Conroy – who would later become my friend and sometime boss – this haunting novel rescued a disillusioned young graduate student from the slough of (deconstructionist) despond by reminding her why she’d decided to study literature in the first place: for the sheer love of it. To borrow a phrase from the author himself, this novel gave me back my reading life.

So, those are just a few off the top of my head. There are so many others. This summer, along with the good folks of the Barnes & Noble survey, I’m going to make a concerted effort to spend more time with books – both light and heavy – and less time online.

Which reminds me: The Overstory is calling my name. Later, y’all.

Can Beauty Save the World? 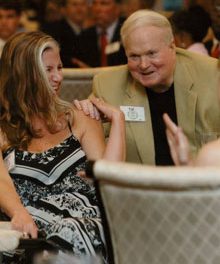