Oh, What a Tangled Web

The other night, my daughter and I rode bikes down to Pigeon Point Landing, as we often do after supper. It was Amelia’s tenth birthday, and all of nature was celebrating as we took our usual spot on the pier. The sun was a nectarine hanging low on the horizon, squirting juicy pink streaks across an iridescent sky. The wind on the marsh was almost autumnal – whipping the water, stirring the Spanish moss, bathing us in blessed cool. We dangled our feet, waiting for the dolphins to make their nightly appearance, a chorus of cicadas serenading us from the trees. I hugged my daughter to my side, my heart full of wonder and gratitude. Everything was perfect. Except…

“Darn it! I forgot my phone! I need a picture of this for Facebook!”

Have you seen the new Toyota commercial featuring a young woman on Facebook? She addresses the TV audience from behind her computer, telling us she read “the majority of an article online” about how older people are becoming more and more anti-social. “So I got really aggressive with my parents about joining Facebook,” she says. “They’re up to 19 friends now,” she quips, sarcastically mouthing the word, “Losers.” Then, she tells us that she has 600-some-odd Facebook friends. “This is living!” she says. While hearing all this, we’re watching images of the girl’s parents rolling through a beautiful countryside in their Toyota Venza, parking, grabbing bikes from the top of said Venza, and riding off with their attractive friends on an energizing excursion through wooded hills. Cut back to the young woman, who’s looking at something online. “What? That is not a real puppy! That’s too small to be a puppy…”

I think both scenarios above – my Pigeon Point Landing experience and the one dramatized in the Toyota commercial – reflect a very real dynamic that’s all-too-familiar to many of us. As the Internet becomes an ever-more-powerful presence in our daily lives, we find the “real world” and the virtual one merging and overlapping in ways that can be unhealthy.

The girl who sits alone at her computer, looking at puppy pictures, and calls it “living!”… The mother who can’t fully enjoy a quiet, beautiful moment with her child without wanting to ‘capture” it and post it online… You don’t need a degree in clinical psychology to know that these patterns aren’t good. You might, however, need a clinical psychologist to help you avoid falling into them. ‘Cause I sure can’t.

I think there are lots of people like me out there. The Internet is such an integral part of our existence now that, love it or hate it – and most of us do both – we can’t imagine life without it. We don’t even want to. So, much like with wine, chocolate and cable news, the best we can hope for is to limit our intake, keeping in mind that addiction lurks right around the corner.

The thing is, we need the Internet. We’ve become dependent on it. If we could just go cold turkey, we could end our attachment… break our addiction. It would be painful at first, but we’d get over it. But who can give up the Internet completely? (Raise your hand. Anybody? That’s what I thought.) No, what we need is an Internet diet, and diets are so damn hard. We need food to survive – we can’t live without it – so we’re forced to cut back on the very object of our obsession… while still consuming it. That’s a real challenge. And that’s the challenge we’re facing when we embark on an Internet diet.

Where to start? What to give up?

This week alone, I did the following things online: Ordered clothes, wished several friends happy birthday, talked to my mom and sisters, corresponded with the Beaufort County School District, conducted my daily business as editor of this publication, and solved several of the world’s most pressing dilemmas via Facebook discussion threads.

Here are some more dramatic things that happened online: A wonderful blog I’d been reading for over a year unexpectedly shut down, leaving me bereft. I followed a random link to another site that made me feel so deeply, terribly awful inside, I briefly considered disconnecting from the Internet. (Crazy talk, I know!) Then, I stumbled across a spectacular blog – full of original poetry and photos – just languishing in cyberspace, abandoned two years ago. It was a bittersweet discovery, but my faith in humanity was restored.

(There are thousands – probably millions – of these discarded blogs dotting the virtual universe. I find them poignant, like burned out stars – still twinkling in the galaxy, but no longer giving off heat. They make me sad, but in a good way – kind of how I feel when my daughter hugs me goodbye. I imagine the people who created them, wonder why they stopped, and what they might be doing now… )

Also online last week, I perused the Norway terrorist’s “manifesto,” learned about Amy Winehouse’s death, followed the escapades of our leaders in Washington, and found a great recipe for honey-glazed salmon.

Meanwhile, in my “real life” – the one that happens offline – I scrubbed the toilets, fed the cats, filled out some paperwork, repotted some plants, worried about money, and shopped for school uniforms.

Okay, so I left some stuff out. But you get my point. You can see how I might sometimes find the virtual world more compelling – and even more “real” – than the real world. For many of us, our relationship with the Internet is far more than just a marriage of convenience. It’s an emotional attachment.

And if you’re expecting me to wrap up this column in a nice, neat little package – something like, “I’m sure it’ll all be fine if we just practice will power and keep our priorities straight” – then you don’t know me very well. I recognize that I need an Internet diet, but I’m resisting it with every fiber of my being. I have no idea how to practice what I’m preaching.

But I’m sure there’s somebody out there who does. Just Google it. 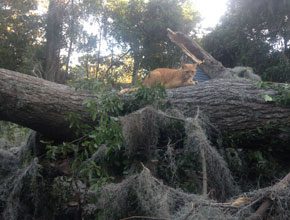 On Matthew, Conroy, and Other Forces of Nature

Real Life in the Virtual World

WALL-E & the Boldness of Turning Back