Ode To a Google Doodle

For generations, American parents have been tutoring their children in some version of the following concept:  “It doesn’t matter what people look like on the outside; it’s the inside that counts.”

My mother said this to me, her mother said it to her, and I have said it, ad nauseam, to my own daughter. Trust me, this is just something mothers say.

It has always been a somewhat dubious doctrine, to be taken with a grain of salt, because the same mother who preached it might also look at you as you were walking out the door and ask, “Are you wearing that?” or “Have you put on some weight?” or “Couldn’t you use a little lipstick?”

Nevertheless, it was a deeply encouraging thought, this notion that the inside you was full of glorious, lovable potential, no matter the state of the outside you. And, judging others according to their insides, not their outsides, seemed a wholly commendable goal. It’s the same ideal we celebrate when we trot out that other worthy cliché, “Don’t judge a book by its cover.” Granted, none of us is consistently good at living out that ideal, but we all agree we should try.

Or, at least, we did agree, for as long as I can remember.

But I’ve been worried about that ideal lately. In this era of enhanced race consciousness – when everyone’s talking about “black bodies” and “brown bodies” and “white fragility” and such – I have wondered how we could possibly continue to uphold it. I have worried that nobody even wants to anymore.

I worry, because I still believe in the ideal. I still believe in MLK’s dream of a country where people are judged by the content of their character, not the color of their skin… or any other immutable trait. I still believe in a future where race is irrelevant, so in our increasingly racialized nation – where every issue is now viewed through that lens, and people seem to want it that way – I often feel discouraged. 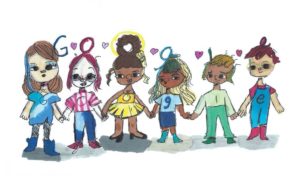 Maybe that’s why I was overcome with emotion when this year’s Doodle for Google winner appeared on my computer screen last week. The annual prize went to fourth grader Sharon Sara, who drew the picture you see here, and wrote, “Kindness means to not look at someone from the outside, but look at their personality, and be open to their friendship. No matter what people look like, you look on the inside . . .”
Sara’s little girl words and little girl drawing moved me to tears. Even the title of her Doodle – “Together As One” – choked me up. It seems the children still believe in the dream. What has happened to the grown-ups?

I’m still trying to figure out how we, as a society, lost faith in this vision. How did the Civil Rights Movement of the 1960s – and all the progress over the intervening decades – lead directly to the angry, riotous, street-scorched summer of 2020?
Grappling with this question back in June, when it was still early days, I wrote:
As an early GenXer born in the mid-60s, I have no real memory of the Civil Rights era, but my own youthful nostalgia orbits around its cultural fruits – phenomena like Sesame Street, All In The Family, United Colors of Benetton ads, Stevie Wonder singing “Ebony & Ivory” with Paul McCartney. I grew up in the age that blossomed from the Civil Rights Movement, and it was beautiful. By the time I was a teenager, “racist” had become the worst epithet you could hurl at a person, and everybody I knew was earnestly devoted to rejecting racial prejudice, in thought, word and deed. Should one occasionally harbor such an unseemly emotion, one surely didn’t say so out loud. To my generation, racism wasn’t just shameful, it was seriously uncool.
So now we’ve entered a new era, and the late GenXers and Millennials are steering the conversation. Much of that conversation revolves around concepts like “white privilege,” “white fragility,” and “white supremacy,” which no longer refers to evil men in white hoods – as it did in my youth – but to… everything. American society in toto. They tell us that “racism” isn’t something we do  or  don’t  do – feel  or  don’t  feel – but something we’re born into. Something we can’t deny or denounce, but must acknowledge. Or better yet, confess. Like sin.

Since I wrote those words, like almost everybody I know, I’ve been trying to reeducate myself. By now, I’m well-versed in the ideas of best-selling authors Ibram X Kendi (How to Be an Antiracist) and Robin DiAngelo (White Fragility), and have read dozens of essays by other scholars, as well.
One of those scholars is John McWhorter of Columbia University, who doesn’t think much of Kendi’s work and thinks even less of DiAngelo’s. He takes issue not with her intentions, or even her diagnoses, but with her prescription – lifelong self-reflection and atonement for white people – and her hyper-focus on race as the determining factor in a person’s life. Writing in The Atlantic, he says of White Fragility:

“Her assumption that all people have a racist bias is reasonable—science has demonstrated it. The problem is what DiAngelo thinks must follow as the result of it. . . . DiAngelo does not see fit to address why all of this agonizing soul-searching is necessary to forging change in society. One might ask just how a people can be poised for making change when they have been taught that pretty much anything they say or think is racist and thus antithetical to the good. What end does all this self-mortification serve? Impatient with such questions, DiAngelo insists that ‘wanting to jump over the hard, personal work and get to ‘solutions’ is a ‘foundation of white fragility.’ In other words, for DiAngelo, the whole point is the suffering. And note the scare quotes around solutions, as if wanting such a thing were somehow ridiculous.”
McWhorter continues: “In 2020—as opposed to 1920—I neither need nor want anyone to muse on how whiteness privileges them over me. Nor do I need wider society to undergo teachings in how to be exquisitely sensitive about my feelings. I see no connection between DiAngelo’s brand of reeducation and vigorous, constructive activism in the real world on issues of import to the Black community. And I cannot imagine that any Black readers could willingly submit themselves to DiAngelo’s ideas while considering themselves adults of ordinary self-regard and strength. Few books about race have more openly infantilized Black people than this supposedly authoritative tome. Or simply dehumanized us.”

I’m not going to lie. Having my own gut reaction to DiAngelo’s book so eloquently expressed by a thinker of McWhorter’s stature – who also happens to be Black – gave my confirmation bias a good stroking. But I’m well aware that McWhorter’s analysis (and mine) is a minority opinion. Maybe we’re wrong. Maybe these books, informed by Critical Race Theory – which has burst from the ivory tower and now propels pop culture – are just what the doctor ordered to help heal a 400-year-old wound. Perhaps this summer of our discontent was just a Covid-driven aberration, or a necessary storm before the coming calm. Only time will tell.

For now, I’m just trying to focus on the simple, profound message in a little girl’s Google Doodle. And praying.

Ring in the Old