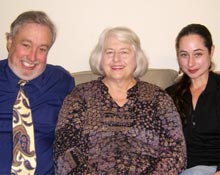 Conversations about ethics, education, creativity, love, parenting and pretty much anything else except chess or math.

Dr. Martha: Questions? Did we get any questions? This is our first column. Who would’ve written in? A benevolent psychic?

Bernie: I’ve got one.

Bernie: If Holden Caulfield Were In my Classroom, on Amazon, Kindle, and in book stores. A reader wrote in saying that her 12 year old son, who used to talk to her all the time, suddenly stopped speaking to her (for the most part, at least). Interesting if not uncommon in and of itself, but what really caught my eye was that the letter was lengthy, intelligent and detailed yet there was no mention of any father.

So, we all wondered, why not? Going with the notion that when people need help, often what they don’t say is more revealing than what they do, we set about discussing the absence of the father in the mother’s letter and the newly muted son.

As we saw it, there could be a number of reasons for the father’s absence from the letter. The first is the most obvious: the father is physically or emotionally absent – mom could have kicked him out, he could have left, he could be deceased, or he could be emotionally uninvolved with family life. In our initial enthusiasm, we set about to examine each of these possibilities and their ramifications for the son. But alas, this is only a 1000 word column, so Dr. Martha, the more practical among us, pointed out that, if any of the above is true about the father, the son’s experience would be one of abandonment– the reasons for that abandonment would not change how it affects his dynamic with his mom.

We all agreed – either the father’s physical or emotional absence was, indeed, the reason he did not make a cameo in the letter, or the mother simply thinks the father is irrelevant. What if she is the sort who – for valid or invalid reasons – has taken over the family and sees or treats him as merely a cog in her family wheel? Does that change how we should approach the son’s new reticence?

Before we dealt with these two possibilities, we turned our attention to the son. At twelve – we all remember – there is a lot going on. At that age, we are no longer playing at growing up, we are actually doing it. We are practicing – and the stakes are real. At 12, among everything else he is doing, a boy is practicing to become a man, and, presumably, the model for this is either his father or his father’s absence, and the model for how we will be treated (loved, respected, or not loved and emasculated) will be how his mother responds to and treats his father or the absence of his father. And since he is in the nether world between child and man, he is likely anxious about and anticipating two things – who he will be as a man and how that will mold how he will be loved… or not loved.

So, in that anticipation of what might be, what he might become, does he see his mother disrespect, fear, or emasculate his father, his father’s memory, or resent the absence of his father? If so, he will likely resent and blame her for that–blame her for the shape of a man she is giving him to fill – and so, his silence could be an attempt to carve out a new model for himself or it could be out of fear and anger. It could also simply be that in a state of uncertainty (which defines adolescence), a child does not so much need answers as he needs someone who sees that he is treading air between one ledge and another, someone who can acknowledge that, and someone who can give him the strength to do what may seem – to him at that moment – to be impossible: to be himself, even if that means he is between being who he was and who he will become. So the son could very well be angry that his role model, the one he loves, has been criticized, and/or that the mother is not seeing him for who he is now. A child’s first view of trust, love and respect between individuals is that between the parents.

There are a plethora of reasons why the son could have turned away. So, as we approached our word limit, we turned our attention to solutions for the mother. Although parents tend to take their children’s behavior personally, as Bernie – the optimist in the bunch – pointed out, a child acts out against the person he feels safest with and on whom he depends the most. This fact needs to temper how the parent responds to the non-talking child. It is much easier to respond openly and with love when one knows one is treated as though one is hated because one, in fact, is trusted and needed.

First the questions: What does it mean that the son is not talking? How does mom feel about that? How do her personal and emotional responses to that color how she now addresses her son? Does she respond out of frustration? Feelings of inadequacy or helplessness? Fear about what he NOT saying? If so, that is like responding to a fearful animal by threatening it with a stick. Adolescents want to be seen, acknowledged and talked with – not talked to. They do not want to be the repository for their parents fears or anxieties – whether those fears and anxieties are about the parents or the children.

So, the first thing the mom might do is check in with herself and figure out 2 things: 1) How does she respond when she is afraid, ashamed, fearful or anxious? Is her child mirroring that and recreating that pattern? 2) How does she respond to him when he refuses to speak? Is she afraid, worried, angry or anxious? He needs her, not her fear. He needs his mother, as who she is, not who she is worried about him being or who she is worried she is. Remembering that he acts out against her because he feels safe with her may help. Dr. Martha suggested, again being the practical one among us, that the mother institute a ritual for conversation and connection that does not demand answers, or hearts cut out and throbbing on the table, but rather, that creates a shared space in which, if the son needs to talk, he already has a safe, non-threatening venue for that – hot chocolate on sunday at 9pm, a movie on Thursday, gardening on Saturday morning which brings her and the son together – no matter what is going on. Some of all our most open moments are those that happen in moments that are already open. Only, however, if as parents we’re open to ourselves.

For more on tips for speaking with your adolescent, you can visit bernieschein.com or our Facebook page (3 Scheins Roundtable), where this discussion will continue – hopefully with your comments and feedback. Please email questions or comments to maggie@pierconsultants.com

About the authors: Dr. Martha Schein is veteran educator and licensed practicing psychologist; Dr. Maggie Schein has taught and consulted for 15 years and holds a PhD in Moral Psychology and Ethics; Bernie Schein is a veteran educator and author of If Holden Caulfield were in My Classroom: Inspiring love, creativity and intelligence in middle school kids.

The Nature of Things

Watcha Gonna Do with All That Junk?

Poetry to the Rescue?