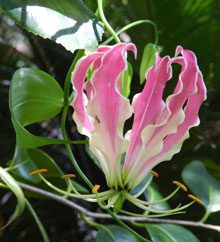 What’s a gardener to do? I’ve been wringing my hands to deal with the angst. Not terribly effective, I can assure you, but it is too hot to do anything else.

My rain gauge is feeling neglected. Over the past 8 weeks it has only registered a bit over ¼” of precipitation. I wrote last time of how dry the garden was; well, it is worse now, much worse. Perhaps by the time you read this we will have had some rain. One can always hope. It seems like there is a large umbrella over the sea islands. My friend Jenny who lives in Sheldon gets regular rain showers, sometimes even too much rain.

When the ground dries out it is not just the plants that need moisture; the various and abundant critters we have around here get thirsty also.

The other day I was enjoying the long distance view in my back yard. As I stood by the window looking out over the extensive marsh, serenity prevailed. Suddenly I sensed movement and looked down to see a doe munching on my plants. She was directly under the window. I had been blithely looking out right over her head. Serenity was the furthest thing from my mind as I hysterically ran outside shouting and waving my hands. It wasn’t a pretty sight; it’s a good thing the back of my home is sort of private.

I work hard at using plant materials that do not attract deer and I use deer repellents on any plants that might seem overly attractive to them, but when the animals are thirsty, they will go to any lengths to find food, even eating something that would normally be considered unpalatable. I had been watering the plants the doe was eating and as a result the leaves were lush, perfect deer candy. As long as the heat and drought continue you can expect to have critters around looking for anything to quench their thirst.

The weather – at least I think it was the weather – has had some positive effects on the garden. In 2008 I planted a Gloriosa Lily tuber and it bloomed beautifully for the next two years then disappeared. What a surprise I had earlier this summer when all of a sudden I spied a fabulous flower!

Unlike most lilies, Gloriosa superba is a vining plant that grows from a long slender tuber. The tendrils that grasp upright supports extend from the tips of the leaves. Although they come in a range of tropical colors from green to deep red, the one seen most often would be the cultivar ‘Rothschildiana’ with its fiery red and yellow flowers. The one I have is pink, which is not often seen. The exotic and frankly flamboyant flowers run between 3 ½” and 5″. The effect is very dramatic.

All parts of the plant are toxic although they are used medicinally after processing. Like most plants they prefer a rich, moist, well draining soil and they do best in bright light with some respite from the afternoon sun. The vines are weak and need support either in the form of a trellis or – and this is the best part – they will twine through a shrub like a camellia, providing striking color on an evergreen.

These plants are native to the jungles of Africa and Asia and are rated to grow in USDA Zones 9 through 11. Here in Beaufort County we are right on the edge between 8b and 9a but a good layer of mulch in the winter will protect the roots. I wish I could blame temperature alone on my plant’s disappearing act, but it stayed dormant through 6 years during both warm and cold winters. Everything I read says these vines return reliably and I have seen them elsewhere. You may have seen the impressive specimen in Darlene Dudley’s garden during the Garden A Day week. Her plant, a G. Rothschildiana, is outstanding.

These are summer flowering plants and the tubers are generally available in early spring. They are not often seen in nurseries but the tubers can be found at online sources such as Brent & Becky’s Bulbs.

I’ve read that these prefer a warm, wet summer and a dry period of dormancy. We have just had a very wet winter and this summer has been warm, but not wet, so the mystery of why my plant stayed dormant for so many years continues.

There is not much to do in the garden while it is so hot, but you can sit at the computer and order your spring flowering bulbs like daffodils and paper whites as soon as possible. Although we do not have to plant the bulbs for several months it is always wise to buy them early, as you will get the best selection. Generally the growers will hold them and ship later in the season, or you can obtain the bulbs now and store them in the refrigerator until planting time when the weather has cooled.

In the meantime, rest up and get ready to enjoy your garden. Fall and cool weather are bound to arrive. Eventually. 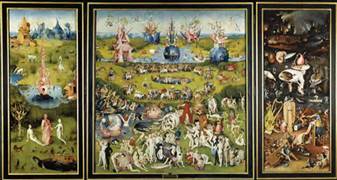 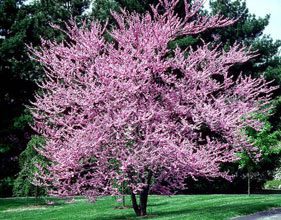 Plant Trees for a Beautiful Future 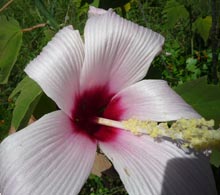