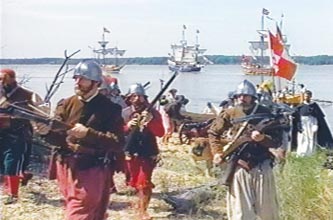 Stu Rodman, Larry Rowland, and I had done our homework. The nation’s best colonial historians and archaeologists had confirmed most of our claim. Santa Elena was a major European settlement – and it was probably the first capital of Spain’s La Florida. However, these comments had been made on the telephone. We needed to review our findings with these experts in person.

On September 27, 2013, we invited the nation’s most knowledgeable Colonial Spanish historians and archaeologists to meet with us in Beaufort. Our goal was to see if they agreed or disagreed with our evaluation of where America really began. The group included Dr. Chester DePratter, Dr. Eugene Lyon, Dr. Paul E. Hoffman, Dr. Larry Rowland, Dr. Stephen Wise, Dr. Stanley Bond, and Kimberly Zawacki. To a person this group of distinguished American historians and archaeologists stated that Santa Elena was a major early settlement. But that was not enough for us. Was it, in fact, the first major European settlement in America? And was it the first colonial capital of La Florida? We needed to hear the answers from Dr. Lyon and Dr. Hoffman. They are the nation’s most recognized experts on Colonial Spanish history. Dr. Hoffman immediately said, “Yes, Santa Elena was the first major settlement in America. And it was also the first capital of La Florida.” Dr. Lyon was more reserved. After all, he’d spent much of his professional life living and working in St. Augustine. Dr. Lyon needed to check his research papers.

This February Dr. Lyon invited me to visit him. The first words out of his mouth were, “Daryl, Santa Elena was the first major European settlement in North America. And it was also the first capital of La Florida.” The nation’s foremost experts had confirmed our claim.

The story of Santa Elena has to be told. The history books have to be changed. The archaeology, which will expand on this history, has to be reopened. And my grandchildren need to understand what it took for their “ancestors” to just survive on our soil.

Dr. Chester DePratter is Director of Research for the South Carolina Institute of Archaeology and Anthropology. Last August I asked him the one question that has long puzzled me: “Why didn’t the State’s Institute of Archaeology and Anthropology tell the world that they had discovered America’s First Major European Settlement? Dr. DePratter lowered his voice like any medical doctor would when he had to inform a patient of his diagnosis. “Daryl,” he said, “archaeologists and historians rarely think of such things. We are driven by discovery. We may inform our fellow archaeologists or historians; but we are not trained to tell the story to others.” When Stanley South made a limited archaeological dig in 1979, he called his fellow archaeologists and historians together. He believed he had discovered the long lost Santa Elena. His visiting associates agreed. All the evidence pointed to the fact that this was Santa Elena. But for all practical purposes, Stan South did not tell anyone else. He did not inform the state tourism director or any state developmental offices. Some of the local papers did cover his story. But very few national newspapers printed the story of the discovery. There were no press releases that reached the national publications. In short, the only word that got out to the press was through archaeologists talking to archaeologists or historians talking to historians. The New York Times was contacted by one of those archaeologists. They printed this story near the back of their newspaper. Notice how tentative some of the statements are:

The site of the lost 16th century colony of Santa Elena, once the capital of Spanish Florida Florida, has apparently been found by the University of South Carolina archaeologists digging at the edge of a golf course on the Parris Island Marine Base. The archaeologists led by Dr. Stanley South, uncovered quantities of Spanish pottery and discovered the moat and traces of two bastions of a fort known in history as San Felipe II. This was one of three forts protecting the settlement of Santa Elena, founded in 1566—just one year after St. Augustine and 41 years before Jamestown in Virginia—and abandoned in 1587.

In making the announcement here Thursday, Dr. Robert Stephenson, director of the university’s Institute of Archaeology and Anthropology, said, “We have found what certainly seems to be one of the major historical sites in the United States.” Further explanations, beginning in the fall, are expected to yield confirming evidence of the site’s authenticity, and unearth remains of Santa Elena itself. At its peak the settlement had 60 homes and a population of 400. Historical accounts indicate that the settlement was situated west of the fort. Dr. Paul Hoffman, LSU historian and a specialist in Spanish activities in early America, remarked, “I have no doubt that the town is there. How soon we find it and other documenting evidence is another question.”

In short, one of the most important historical discoveries of the twentieth century went virtually unreported. The only thing reported was that they thought they’d discovered Santa Elena. In that initial tentative press release, they did not claim that Santa Elena was the first major European settlement in America. They didn’t make that claim because they had not done the research to compare when the first settlers landed at Santa Elena vs. those at St. Augustine and Jamestown. We did that research.

The Santa Elena archaeological site on Parris Island also languised because there was very little available money to do a continuing archaeological dig. The state’s Institute of Archaeology and Paleontology had to rely on private donors. And few came forward. The Marine Corps did help now and then, but their budget for such work has been drastically reduced. Without archaeology, there are no discoveries. There is no analysis or confirmation. And that is why the discovery of Santa Elena went unreported.

In 1988 the National Geographic Magazine’s Senior Associate Editor, Joseph Judge, heard of the 1979 discovery of Santa Elena from an archaeologist. He visited the site and wrote a fascinating article. He introduced his article by saying this: “This is not only the story of how a king and his people tried and failed to settle a wild new world. Nor only the story of nations at war—Spanish, French, English, Guale, Chisca, Orista. It is the story also of how knowledge is so hard won, how men and women of our own time, archaeologists and historians, piece together the past, tiny bit by fragment by shard, until what is revealed to our wondering eyes is a portrait of ourselves. 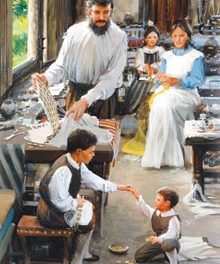