The Long History of “Made in China”

Today the tag “Made in China” often makes us think of cheaply made items that are inexpensive and disposable.  If we could step back a few generations our ancestors would be shocked by our attitude.

Long before Europeans even thought about coming to America they were enthralled by China.  Large and mysterious, China was the land of economic opportunity.  It was the source of silks, spices, tea and beautiful china made from an exotic product called porcelain.  This article is the short-story version of a very long history of trade.

I’m really picking up somewhere in the middle of the story when I start by talking about porcelains.  Tea had been desired by Europeans since the mid-1600’s and was considered a luxury for royalty and their wealthy friends. Its export increased later in the century and, though still pricey, was more readily available.  As with anything that has great expense, the consumption of it became something of a ceremony.  Maybe the Chinese habit of ceremonial tea drinking had an influence because sea captains who would take part in the ceremony in port would take those stories back to their own tea tables at home.  At any rate, the drinking of tea became quite an event, especially in England. 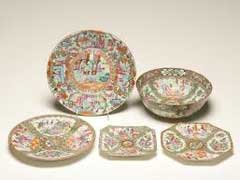 Locked chests and caddies were created to store tea, silver implements were designed to stir, strain and dispense it, but most important was the porcelain.  The formula for the thin, hard substance was locked in China.  King’s had rooms full of scientists trying to replicate it, but the project was a huge failure until relatively recently.  The Chinese were creating forms and decorative patterns they saw as “European” (not at all like what they used themselves), and the Europeans were masking their less than perfect imitations in decoration “in the Chinese taste” (still not at all like what the Chinese were using themselves).  One of the earliest and most popular patterns copied was the blue and white pattern referred to as Canton, or Blue Willow, which is so familiar even today.  You’ve seen it, it features a bridge spanning an island and a garden and much folklore has arisen over the number of people on the bridge, or under the bridge, the birds, the weeping willows etcetera.  This pattern has been consistently popular since its European introduction in the late 18th century and was exported to America almost as soon as people had tables to put it on.  Another pattern familiar in America and especially popular in the South was Rose Medallion.  It features decoration done predominately in rose tones (duh) and has flowers and geisha.  Both patterns were romantic representations of the perfect and peaceful life of the Chinese, as presented in the select places Europeans were allowed access to along the Chinese coast.  Both the tea and the pieces used to drink from were expensive and treasured.  By the way, is it any surprise that more expensive tableware was given the name “chinaware” or “china”?

As the industrial revolution took over production of housewares, china became more cheaply produced and of better quality.  Good quality porcelain almost met the quality of that produced in 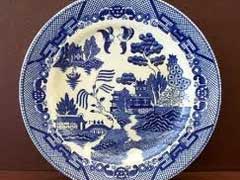 China (the place, not the thing.  I know I’ve gotten you confused.)  The most popular themes for mass-produced, tissue transfer decorated stoneware were still based on those early patterns exported from China.  Europeans and Americans graced their tables with pieces decorated with pagodas, willow trees, geisha, exotic flowers and dragons.  The opening of Japan to outsiders in the late 19th and early 20th century refueled this furor for anything Asian since the Japanese had also borrowed design elements from Chinese porcelains.  Soldiers from WWII and Korea brought back mementos with the same decorative elements for their loved ones.  Copies of these early wares are still available today in a range of prices.  Patterns our forebears ordered from European agents and paid for by cotton or tobacco shipments to England can be purchased at inexpensive department stores or import shops today.  The times have certainly changed even if the designs have not. 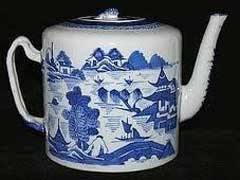 Studying the evolution of porcelains and of trade is certainly fascinating.  I have three shelves of my bookcases dedicated to the subject… at least of the decorative objects; you need to look at someone else’s bookcase for theses on trade. I have just brushed on the topic here, but if I’ve sparked an interest, visit the local libraries or come by my house for some tea and we’ll have a little talk.  Make sure you have plenty of time.

Libby Holloway is a Certified Appraiser of antiques and residential contents.  She is a member of the International Society of Appraisers where she is currently serving as Secretary of the Board of Directors.  Libby can be contacted at www.LibbyHollowayAppraisals.com