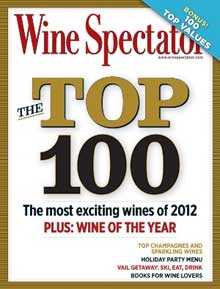 Each year, Wine Spectator magazine publishes two lists. The first list is the top 100 wines of the year, and the second list is the top restaurants, WORLDWIDE, that have earned awards for wine excellence. Both of these lists require massive effort and are judged in accordance to strict guidelines. I would like to concentrate on the Restaurant list and how it pertains to us here in the Lowcountry.

I must admit that each year I look forward to reading the restaurant list. I have a disciplined method. The first step is to check Connecticut, where I was brought up. Next I check Massachusetts, where I lived for many years. I then move on to countries I have visited – then South Carolina and Georgia, now that I’ve relocated. Next, I scan California (hard work but fun), Oregon, Washington, Maryland, Maine, and New Hampshire. Uh Oh! I’m wavering… get back to the Lowcountry. Wine Spectator evaluates the wine list of each entry. The restaurant as a whole is not considered. An assumption is made that the food and service are commensurate with the quality of the wine list, the idea of wine being to enhance the dining experience. With this in mind, I start in Charleston on East Bay Street on the One Hundred Block. Five award winning restaurants clustered together are:

• Slightly North Of Broad
• Social Restaurant and Wine Bar (Wine is also for sale at retail. The selection is substantial.)
• Magnolias
• High Cotton
• The Cypress Lowcountry Grill and Bar
Staying in Charleston, there are:
• The Charleston Grill on King Street
• Poogan’s Porch on Queen
• McCrady’s on Unity Alley

These restaurants, in my opinion, are terrific and very well attended. The only problem I have ever encountered is parking. Some planning is required unless you have valet parking available.
Let’s move on to the restaurants located in Hilton Head, Bluffton, and Beaufort. One restaurant in Beaufort was awarded an Award of Excellence – Griffin Market on Carteret. One award went to The River House in Bluffton at Palmetto Bluff. Ten Restaurants on Hilton Head were given awards:

I overlooked two restaurants. The first is The Ocean Room in the Sanctuary Hotel on Sanctuary Beach Drive on Kiawah Island. The second is Water’s Edge on Shrimp Boat Lane in Mt. Pleasant.
On our southern edge in Savannah, Wine Spectator mentioned three restaurants. They are The Local 11 Ten on Bull Street, Ruth Chris Steakhouse on West Bay and the Sapphire Grill on West Congress. All three are in downtown Savannah.

I am familiar with the wine lists in the majority of the above named restaurants. Allow me to assure you that careful thought goes into the development of the wine list; and that a sincere effort is, at all times, present to please as many customers as possible. This is not an exact science. However, it is a super important part of the total restaurant package.

WINESPEAK
In my opinion, our little corner of the globe was well represented. The tally? Twenty-six restaurants in the Lowcountry received awards out of 3793 worldwide. As a region, South Carolina (61), North Carolina (93), and Georgia (59) did very well. With the economy on the mend, maybe the trend towards more fine dining will continue. Let’s hope so.

The Wines of California at Mendocino