A teddy bear made out of my dad’s golf shirt. The ceramic bride and groom that topped our wedding cake thirty years ago. Jewelry. The crucifix that hangs in our bedroom. Our wedding album. Our wedding picture. My dad’s painting. His felt hat. Documents. Passports. Cash. Checkbooks. A few framed photographs. One packed suitcase. My mother, her suitcase, her medication, her safe, her wheelchair. The dogs. Their food. Frozen meat. My work computer. My MacBook Air. M Train by Patti Smith. A journal. My iPhone. A few letters from Fr. Bernie I need to answer. The Flex with a tank full of gas. The clothes on my back. An extra pair of glasses. The bottle of Guerlain perfume I bought in Paris. Toiletries and make up. A Coach briefcase and a red Michael Kors satchel. Converse tennis shoes. Leashes. A dog bed. A dog crate. The Steelers blanket. Raincoats. A gallon of water. Two flashlights. What do you take with you when you have to evacuate from your home? What do you leave behind?

At 9:38 PM on Tuesday, October 4, after turning on the security alarm, I pulled out of the driveway, gave the house one long look and drove away, my husband following behind in his Rav4, leaving Lady’s Island, leaving Beaufort, leaving the Lowcountry for the Upstate, to Greer, to spend the next eight days at my brother’s house.

After an evacuation, it is the wait that tests the spirit. Waiting for the unknown. Waiting for the storm to pass. Waiting for news, for a text, for the numbers on the Saffir-Simpson Hurricane Scale to decrease from 4 to 3 to 2 to 1 to zero. It is the wait. And it becomes something else. Maybe dread. Mostly a slow release. A recognition that there may be nothing when you return. It may all be under water. Or burned. Crushed. Blown away. All of a sudden, letting go means more than it ever has. No control. No looking back.

What did you forget?

You did not put plywood over the windows. You did not move your belongings up from off of the floor. You did not throw out the ice cream or popsicles, the bags of frozen strawberries, the milk, the yogurt, or the ice turning to water. All of your books, your journals, a manuscript, poetry, bikes, artwork, shoes you have never worn, business clothes you don’t really want, and the flowers in the vase on the kitchen table.

Hours preceding the anticipated collision between Matthew and Beaufort, I met individually with my husband and mom. I told them to be prepared to lose everything. Right or wrong, I thought I owed them a moment of mental preparation, to register something of the unknown but to pray for a better outcome.

On Saturday morning, after Hurricane Matthew left Beaufort County and continued his trek toward McClennanville, with no news, no pictures, no texts or emails, my brother invited me on a ride with him to his farm in Due West. My sister and her husband, their son and their mini pet zoo of seven dogs and two cats were riding out the storm in his cabin and barn. My mood was laden with dread and loss from the “not knowing.” The Beaufort County traffic cams were no longer working and the security cameras at my brother’s place on Fripp Island were black but for the white lines that looked like the fingerprint of a spastic echocardiogram.

I climbed into my brother’s F150 and rode with him to his farm. On his windshield is a sticker informing me that his truck is “Ford Tough” and “Built by Rouge People.” Ophelia played on the radio and the lyric “…you’ve been on my mind since the flood” summoned coincidental thoughts of floating treasure, ruined carpets. We passed a Baptist church in the town of Donald. The marquee said, “Empty me of me so I can be filled with You.” A bus, tricked out as a blood mobile for donations, passes by and occasional signs for the local election solicits would-be voters to cast their ballot for “BOOCHIE for the Sheriff”. Ah, the South. Another billboard implores me to Trust in Jesus. Take Him at His Word. My brother and I exchange barbs on what music to listen to on the ride. My fear is subsiding.

The farm is unscathed. An occasional gust moves through the tall southern pines, a reminder of winds a few counties away. We four-wheel around his property striped in fields of golden rod and tall grass, studded with deer stands. When we finish our excursion, I take a walk down to his pond and pick up acorns, bright green with brown bonnets. New life. I put four or five in my pocket and later, I pass them out to family members, a small token of my hope for the best.

We head back to Greer, home for the next five days until the power returns to Lady’s Island. There will be more waiting but my brother’s insistence to stay positive kindles an uncertain inner strength and sets my resolve to accept whatever Matthew and Mother Nature have in store.

I moved to the backroads when Interstate 26 clotted with traffic, construction and lane changes. Highway 21 South is a two-lane respite from the pace and uninspiring scenery of I-26 and I-95. As my Mom, Toby, Trooper and I traveled south, we started to see the downed trees and newly cut trunks that once crossed and obstructed the highway. I stopped in Branchville for gas, a potty break and a milk shake from The Churn.

While I was away, a few neighbors returning ahead of me called or emailed to describe our Walling Grove neighborhood as “a war zone.” Trees were down or teetering in my yard but the live oak towering over my mother’s bedroom and my home office was still stretching above the metal roof. Once I unpacked the car and moved all of us back in, I walked out to the oak, stretched my arms around her, kissed the bark and thanked her for being so strong. I thanked God too.

It appears that the river and marsh are reclaiming their borders as evidenced by cordgrass carpets laid out across sandy paths and watery banks. Access to our community dock is gone, the wooden ramp disconnected and stacked to the side like matchsticks on dry land. Further down the Coosaw River, private docks have disappeared with only the pilings stretching into the sky, stoic resting places for pelicans and herons. I was reminded by others of what could have been, of the unimaginable destruction of a Category 4 hurricane. I never, ever want to experience one. Hiding from Matthew was enough for one lifetime. 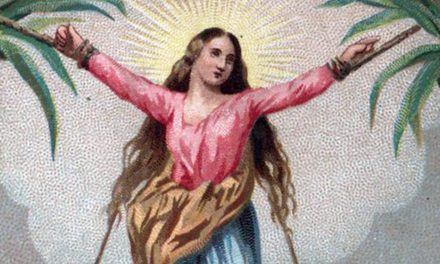 St. Corona and the Daily Cross of Virus Days