Rainbows have been following me.  That is what it feels like anyway.  When they have not been directly in front of me, I have had to look over my shoulder to discover them. It started in Charlotte when I saw my first double rainbow walking to Big Daddy’s Burger Bar with a group of friends.  A couple of months later, I watched a single rainbow drift across the Coachella Valley from a perch high in the Little San Bernardino Mountains in southern California.  I saw one lightly kiss the tip of an airplane wing on a recent flight from Phoenix, and another fell from the Mexican heavens during the takeoff of a late summer flight.  Rainbows frequent the skies above Lowcountry tidal creeks after late afternoon showers, and just the other night, I spotted a rainbow through the windshield as I drove my mother home on Brickyard Point Drive.  In New York City, one was painted on a sign bolted to the side of a brick building.

I know what rainbows are, or at least I thought I did.  I have always simplified my understanding of them as the sun’s reflection off of misty, suspended water, usually related to a recent rain shower, or as a result of sunlight bouncing off of the remnants of a nearby thunderstorm.  The National Center for Atmospheric Research characterizes the traditional rainbow as “sunlight spread out into its spectrum of colors and diverted to the eye of the observer by water droplets. The "bow" part of the word describes the fact that the rainbow is a group of nearly circular arcs of color all having a common center.”

The common center of a rainbow, and my frequent sightings of them, have collided at my core, and I have taken each and every rainbow as a sign or a gift because of the unique times in my life they have appeared.

Charlotte was a celebration of friendship and accomplishment as I shared lunch with fellow graduate students on a beautiful spring day.  The rainbows heralded our final moments at Queens University.

In midsummer, I went on a solitary pilgrimage to the California desert to deal with some of the demons from my past.  Climbing to the top of Keys View, I sat on a boulder in Joshua Tree National Park remembering days when my husband was deployed to Desert Storm, leaving me alone and lost in the high desert town of Yucca Valley.  A rainbow, anchored in wisps of gray black clouds, drifted across the valley that stretched from the Salton Sea to the green golf courses of Palm Springs and Rancho Mirage.  As the rainbow disappeared in the shifting of the sunlight, my burdens and tears evaporated into the dry desert air.  My time with the rogue rainbow was healing.

Lately, I have been frequently flying the friendly skies for business, and on recent trips to Phoenix and Mexico City, when I have been seated by the window, rainbows have accompanied the flights, dancing just off of the plane’s wings or resting on pillows of clouds suspended in the horizon.  They are a comfort of color, a result of God playing with His watercolor set, and painting the sky in broad-brush strokes of yellow, blue and blue.

In New York City, after a colleague and I emerged from the Lincoln Tunnel into the bustle of heavy traffic, we stopped at a red light.  To our left, on the wall of a building on West 40th Street, was a sign painted with five arcs of primary colors, an elementary rainbow with the message, “Where there is darkness, light.”  I learned later that the building was The Dwelling Place of New York, a private, temporary shelter for women founded in 1977 and served by the Franciscan Sisters of Allegany.  The rainbow caught my eye as we made our way into Manhattan, toward the Intercontinental Barclay Hotel, just a block away from Park Avenue.  Thinking back, I wonder what subtle turns in life took me toward the luxury of this city landmark and away from the austerity of a transitional residence.  Fine lines draw the borders of our journeys.

The end of the rainbow always seems to find me planted in the sandy soil of South Carolina.  Engraved in the slate gray skies of the passing day, a rainbow reflected the setting sun, and hung like a mobile above tall pines, spreading oaks, and lazy stretches of lush green marsh, as I drove my mom home after a weeknight dinner.  During a recent visit, my neighbor Sam passed on his homemade wisdom advising me not to “look for gold when heaven is all around you.”

A few coins and a bit of luck are always welcome, but the chance sightings of rainbows at times when light and life itself is diffused and diffracted, are the free gifts of heavenly delight.  There is no sense looking “somewhere over the rainbow” if a common center of color and light can rest inside of each of us and we reflect that beauty to the people circling around us. 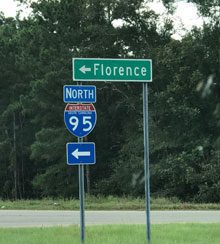