I do not want to create a voice for Cokie. She had her own. My mom’s Bichon Frise passed away in September, and I do not want to be cute or clever at the expense of my mother’s emotions, or the memory of our dear pet and friend. The idea for this essay came from a CD about memoir written and narrated by Natalie Goldberg. On a ride back to Beaufort from Jacksonville, FL, Ms. Goldberg asked me what it is to “have an old friend from faraway.”

She described memoir as carrying an image of someone or something within, and detailing and sharing it by writing. Natalie told me, “We are the people who keep the image alive.” Memoir is a way of letting go – a way of understanding and carrying places and people – even dogs – and “ultimately the final gift, how we let go of them.”

If Cokie had written her memoirs, she might begin by sketching a picture of Pittsburgh, birthplace to a litter of romping, white cotton balls. No one in our family had ever heard of a Bichon Frise, but my mother had been researching the breed that would be an exception to all of our preceding family dogs – boxers and beagles, mutts and Weimaraners. Irene was looking for her dog.

I do not know if Cokie knew, hence she might not have included this in the pages of her book, but I was not enthusiastic about the prospect of my mom getting a puppy. Irene was knee deep in caring for my father, a man paralyzed by stroke and in need of her vigilant attention, and I was afraid a pet would be too much for her. Months earlier, Irene had had to have Pharaoh put down when my dad’s beagle could no longer walk, and the pain of that loss lingered alongside my father’s metamorphosis into eternal dependence. But a friend of mine counseled me, saying that maybe a little dog was exactly what my mom and dad needed. So, I took Irene on the ride to get her puppy. She paid the breeder out of her small savings account, and we named her “Coquette,” because she was petite and the breed’s title is French. Coquette was shortened to Cokie, and Cokie lived with Irene for fourteen people years, until she was ninety-one years old.

Memoirs are generally about how one remembers a life. If Cokie could type, she might have pawed out details about plane trips and car rides, ice cream at Bruster’s, and daily dog treats. She might have reminisced about her love of chocolate and early morning belly rubs as she stretched out in the comfort of her master’s bed, reluctant to meet the doggie demands of another day. Her move to South Carolina’s Lowcountry took place in the back seat of a black Honda Accord, and acclimation to her new geography included skin allergies, ticks, and the oppressive heat of southern summers.

If written, maybe Cokie’s memoir would be a best seller because she could teach her readers through canine eyes. Happiness was as simple as a car ride or a dinner table scrap. Never wanting to be left behind, she wanted and needed love, but she remained fiercely independent, even snotty, and sometimes aloof. A little more than three years ago, an intruder came to live with us, and Toby, an abandoned beagle from St. Helena’s Island, took over Cokie’s toy box and even went so far as to attack her when she rounded a kitchen corner too close to a garbage can littered with chicken bones. But Cokie was a survivor, and she adapted to change again and again, over and over, as each of us must do to become our ultimate selves.

Cokie might have chosen a unique structure for her memoir and looked at her life through Irene’s eyes. If the memoir has a heart, Cokie’s story rests in Irene’s. Cokie was my mother’s best friend. At least on one occasion, I told Irene that she cared more about her dog than she did for her own children. My latest argument with my mother was over Cokie. Of course, my mother loves her children more than any animal, but Cokie was my mother’s companion for what must have been the loneliest days of her life, the months and years immediately following my father’s death. My mom says that my dad told her to take care of Cokie, and my mom prides herself on having done just that. But in Cokie’s memoir, she is the little white soldier who is the sentry to my mother’s heart, and once again, that heart is split wide open to the pain of loss and grief, something that never quite disappears, it just morphs with time.

Cokie’s memoir could be fashioned in a literary ending, a small and heavy mahogany box, partnered with a lock of white hair from a tail that curled and bounced as she trotted down the long, concrete driveway after a neighborhood walk, all placed on a special bookshelf in my mother’s bedroom. If she wrote, her story might have been that final gift Goldberg spoke of, intimate and in large print, distinctly written for my mother. I know she would thank Irene for a life full of love, and caring, and adventure. Cokie would humbly accept my mother’s gratitude for being with her on a journey filled with change, and joy, and frailty, and loss. Her tome would not know how to end, because in the end, a brain disease took Cokie and she forgot who she was, and her little heart beat too fast, and her front legs gave way, and she scared Irene with a seizure that seemed to last forever.

If Natalie Goldberg’s teaching is correct, and indeed memoir is all about “how we let go of them,” Cokie would conclude her tale by letting us go with her dignity. That is what Irene chose for her. When I turned around at the Animal Medical Center for my last goodbye, her left ear was cocked in a funny but reassuring way that told me good bye, it was okay. And as my mom exchanged a few parting words with Dr. Mark, grateful for his loving care and counsel for a dog he and his staff had cared for over six years, I knew that Cokie’s memoir is part of my own, and this is my gift of letting her go. 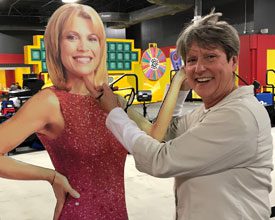