Everyone will have a birthday this year.  Even as we pass away, that one day marks our beginning and another will mark our end.  My birthday just concluded and having it occur on a Saturday this year made it a little more of a celebration than it usually is on a weekday workday.
For me, birthdays carry significance.  Not just because the number classifies a generation with an expected level of maturity and success, but also because birthdays are mired in the idea that somebody remembered it, remembered you.  Someone knows that day was the point in time you entered the world.  There are only a few birthdays we recognize with any formality – Washington, Lincoln, Martin Luther King, Jesus Christ and the United States of America.  I feel lucky to know I’m on someone’s calendar or in their Palm Pilot.
I am still blessed to have a parent in my life to help me celebrate and being the oldest of three children, my mother’s first delivery has significance in her life.  She recalls that I was a month late.  I was supposed to be a “Christmas baby” and she had to be induced.  In her words, “I came out talking”.  I carried my “cherry blanket” around for years and sucked my thumb even longer.  The womb, that blanket and my thumb are things I left, lost or gave up many years ago.
Think back to your birthday celebrations as I share a few of mine.  My birthdays always involved a homemade cake with each candle representing the past years, the new one and one sticking out of the side of the cake for good luck.  My brother, sister and I got to pick our favorite cake and icing and, for a long time, I chose chocolate-chocolate cake until I acquired a taste for spice and then carrot cake.  This past birthday, my husband surprised me with a homemade, heart-shaped carrot cake with a Happy Meal character on top and two candles.  One was a 9 and the other a 4 and you can decipher their order.
As kids growing up, my sister, brother and I were limited to one birthday party when we turned nine years old.  These included friends from school and neighborhood pals in Sunday dresses or better than average play clothes.  There were party hats and favors, pin-the-tail-on-the-donkey, musical chairs and of course, presents.  I still have a small, tattered, pale blue book entitled, “A Day of Your Own” by Alice Low, a gift inscribed “To Vivian B. from Holly C.”  Holly Curran was a childhood friend and next-door-neighbor that has since died from breast cancer.
I had a surprise party given to my by school chums when I was 14 and champagne on my 21st birthday.  Over the next two decades, I would celebrate January 20th in a variety of towns and states.  When I turned 40, my parents gave me roses and a shadow box that frames my christening gown.  My husband made a video of my friends and family wishing me a Happy Birthday and took me to the Greenbrier Hotel in White Sulphur Springs, WV for the beginning of a significant decade.  I celebrated birthdays like most people celebrate New Year’s Eve and sometimes I did it alone with presents and birthday cards mailed from far and wide.
This year, I celebrated my birthday by attending the 2007 Summerville AAU Wrestling Classic.  My nephews wrestle.  My 11-year-old godson Stanley took Third Place, pinning a guy in a headlock that had beaten him in the first round.  My 8-year-old nephew Luke took First Place, proving that a true star dominates even on a mixed diet of salami, yogurt raisins, pizza and Propel.  I went to the event to see them wrestle but quite frankly, I wanted the hugs.  The geographic proximity of the wrestling match made it convenient to spend time with the next generation of my family.  Seeing the boys brought me closer to my dad, a real birthday gift.  The birthday field trip north included a seafood dinner at Hyman’s in Charleston, Mass at the Cathedral of St. John the Baptist and a quiet ride home with my regular entourage – my husband Mac, my mom and her dog.
On my “birthday eve,” I passed out on the couch watching a 2-disc DVD entitled “No Direction Home”, a Martin Scorsese picture about Bob Dylan that previously aired on PBS.  On the night of my birthday, I finished watching Part One.  I found it inspiring to watch a young man of twenty realize a dream.  At the same time, it was haunting to watch an older man reflect on his life if for no other reason than to understand that our lives paralleled one another in the shared process of aging.  In between Dylan, I heard from friends and family.  On this morning after, a pink sunrise filters through the live oaks in my backyard and I marvel at the presence of God.
Sitting on the couch in our living room as the hours of my birthday passed, my husband gave me a hug and looking at the mantle decorated with birthday cards and a “Happy Birthday” streamer, he informed me that my “balloons are sagging”.  I laughed understanding what he meant but fully aware that indeed I was not the 28-year-old woman he married.
The birthday book Holly gave me forty years ago ends in this verse:

When the company goes
(That’s a formal polite time)
You play with your presents
Until it is nighttime.

You’re allowed to stay up late
To see the last star
Just as though you were older
Remember – -?
You are! 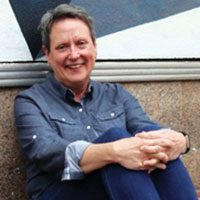 A Love Letter to the Water Doctor