On Thoughts and Prayers and Uncontrolled Anger

I spent the first days of November on a mountaintop in Tennessee at my college reunion. It was a whirling dervish of a weekend - uproarious laughter, nostalgic tears, too much food and wine – and when Sunday morning rolled around, I drove my weary self down the mountain for a short visit with my parents in Alabama.

I’d toyed with the idea of attending worship at the beautiful All Saints Chapel before leaving Sewanee, but I wanted to get on the road early. As it turned out, my drive to Mom and Dad’s was more satisfying than any church service. The day was windy and autumn leaves scudded across the country roads, swirling down from trees ablaze with gold and red, alongside alabaster fields of harvest-high cotton. I found hymns on the radio, sang along to ‘Be Still My Soul’ as I rolled past barns and cows and scattered circles of hay. Down Winchester Road to Moores Mill Road through the little town of New Market, I was poetry in motion, I was. And before I knew it, I was in my mother’s kitchen.

We’d hardly had time to catch up when the TV in the next room informed of us of the church massacre in Sutherland Springs, TX. It had literally just happened. While I was stilling my soul on the picturesque back roads of north Alabama, 26 people in a small Texas town were being slaughtered in their place of worship.

And here we were again. Another mass shooting. That was almost a week ago, and by the time you read this, we may have forgotten Sutherland Springs and moved on to the next one. Remember Las Vegas? Hardly anybody seems to. We’re “desensitized,” they say.

Which is probably why we’re all discussing this latest tragedy in that way that we always do now - the blaming way. The “you go to your corner and I’ll go to mine” way. The passive aggressive - but mostly just aggressive - way. We’re talking about “the American people” as if there were any such unified entity anymore . . . saying “we” this and “we” that, when what most of us really mean is “they” this and “they” that. The “it’s about guns” crowd is mad at the “it’s about mental health” crowd – and vice versa - and now there’s even a national battle raging over “thoughts and prayers.” Thoughts and prayers, y’all. For God’s sake.

As for me, I try to avoid the conversation altogether these days. For the record, I support a better mental healthcare system and better gun laws. Yes, I do. But these issues are far more complicated than passionate partisans are willing to admit. They need to be hashed out in detail, with compromise as the goal. And “compromise” is a cuss word among those who do most of the talking. So, again, I mostly keep my mouth shut. Saying nothing - refusing to join the conversation - is my own private “stand.” Passivism is my activism.

And here’s why: Because in today’s America, I believe there’s something even more important than gun control, and that’s anger control.

“Though we have the understanding and the skills to treat the anger epidemic in this country, as a culture, we have been unwilling to accept the violence problem as one that belongs to each and every one of us. We have sought scapegoats in minority cultures, racial groups, and now the mentally ill. When we are ready to accept that the demon is within us all, we can begin to treat the cycle of anger and suffering.”

According to Hayes, we are “a culture awash in anger,” and I believe this with every fiber of my being. I see it all around me - especially on social media. I try to acknowledge my “demon within” - my anger - on a daily basis, and when I do, I can usually drive it out. Then, and only then, can a productive discussion ensue. But I haven’t found a lot of folks interested in driving out their own demons lately - they just want to drive out yours and mine - and that makes positive conversation almost impossible. Anger just breeds more anger. This is why I mostly choose silence . . . and, yes, the internal companionship of thoughts and prayers.

My silent activism does not fly with everybody. Or even with most people. Good people I respect and admire do not respect and admire my thoughts and prayers. They want me to “do something.” When people on social media cajole you to “do something,” what they really mean is “say something.” They want you to speak out - preferably with a reductive slogan preceded by a hashtag.

After Sutherland Springs, Bishop Robert Wright, of the Episcopal Diocese of Atlanta, responded to President Trump’s call for prayers with this statement: “Let’s not pray. As someone who convenes and commends prayer for a living, what America needs now is less prayer and more action from her elected officials. When the doers of evil are foreign born, suggestions for policy and action flow forward. When the doers of evil are Americans with automatic and semi-automatic weapons we are invited to moments of silence and prayer. Silence is what we use to hear God speak, not a place to hide from our responsibility. Prayer is not a refuge for cowards. Prayer is where we steel ourselves to partner with God for good. Please do not invite me to pray in response to the horror of Sutherland Springs, Texas, unless it is to pray courage over elected officials who intend to work for the ban of automatic and semi-automatic weapons.”

Many Americans were validated and affirmed by Wright’s statement, while many others felt hurt and slighted. By aligning himself - and his church - so closely with one side of the “culture wars,” Bishop Wright effectively alienated the other side - just another rift in the body of Christ, another brick in the wall between Americans. And more anger.

Years ago, I returned to the faith of my childhood, hoping to transcend “worldly things” . . . like politics. I’ve long dreamt of a Christianity that is neither “conservative” nor “progressive” - that aligns neither easily nor comfortably with either of our political parties. But alas, our churches are made up of humans, and we humans are tribal to the core. I was being idealistic.

I’ve become more realistic since then. I no longer expect to transcend politics, even at church. But I still harbor hope that mutual acceptance - and even respect - is possible between the true-believing partisans who control our national discourse.

In his fascinating book The Righteous Mind, social psychologist Jonathan Haidt explains why good people - emphasis on “good” - are divided by politics and religion. My fervent wish is that our politicians, our clergy, and everybody else in the Western world would read this book and embrace its vision. Or at least consider it. Without yelling.

Until then, I intend to drive as many country roads as possible, do a lot of singing, climb the occasional mountain, and duke it out daily with my own anger demon.

On Loving (and Hating) the South 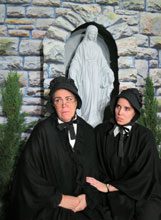 Starting the New Year with ‘Doubt’