When I moved to the South Carolina Lowcountry nearly 13 years ago, I was already deeply in love with its luscious expanses of water, diverse species of wildlife and waterfowl, marsh that reflected an ever-changing palette akin to that of Vincent Van Gogh, and an amazingly wide sky so often lit by daily sunshine and cluttered with fat, puffy clouds that would’ve probably inspired Georgia O’Keefe to set up an easel on the Beaufort River Bluff to capture their glory.

Oh, I’d heard tales of hurricanes. Riveting accounts of “the disastrous storm of 1893,” when some of the few survivors on St. Helena clung to trees through the whole nightmare; of folks hunkering down in their homes as Gracie ripped off roofs in 1959; and of Hugo, which at the last minute changed his mind, made a right turn toward the east, and ravaged Charleston instead. Pat Conroy’s account of that big boy storm in South of Broadconvinced me I never wanted to ride out one of those suckers.

Complacency set in. The ol’ “ah, that’s not gonna happen here, not in Beautiful Beaufort by the Bay” mindset. But just in case, I’d collected vital docs, compiled a file of South Carolina Hurricane Prepbrochures, learned the locations of my utilities turnoffs, arranged available places to stay with friends in the mountains and family in Charlotte, and thought briefly about what I’d take, on the off-chance that a hurricane might really happen.

So Matthew’s 2016 march straight into my adopted home took me by surprise. As the “Be afraid…be veryafraid” channel – oops, the Weather Channel – tracked its progress, I went on with life as usual, curious, but still not convinced. On a walk one evening as Matthew drew ever closer, I encountered a Beaufort old-timer, and asked if he thought this storm might really hit us. Rubbing his grizzly unshaven jowl, he thought a minute, then said, “Yep, I believe it will.” Then chugged away in a rattletrap pickup.

Next day, the Governor concurred. Having been jarred into action by the order for mandatory evacuation, I “crazy-packed” in a complete panic and moved porch furniture indoors. Heeding a friend’s warning about the “I-95 and I-26 evac parking lots,” a neighbor and I headed to Charlotte via back roads. Not until we were driving through downtown Yemassee – too late to turn back – did I remember family photos. Though I did take numerous work projects for the few days at my sister’s, I got not a shred done, as every available minute I was tracking Matthew’s path on TV, marveling that Jim Cantore could continue to cling catlike to a palm tree in such heavy wind and rain, while comparing his prognostications with spaghetti models on Mike’s Weather Page on my laptop.

In the wee hours when the storm was making landfall in Beaufort, I texted a friend whose husband decided they’d stay in their two-story, history-laden, downtown abode surrounded by old, tall trees. The day before, he’d boarded up and they’d hunkered down. While winds howled around their house, rain slapped the metal roof, and tree limbs crashed to the ground nearby, she texted back immediately, grateful to touch base in the darkness.

“This is a nightmare,” she texted back. “I’m terrified. And Ed (not his real name) has been snoring next to me for the past hour. I want to punch him. We’ll never stay for another hurricane.” And they haven’t.

By the time the “all clear” sounded for those of us who had skedaddled, I returned to an overwhelming workload and a house way out of order, both of which took an exceptionally long time to rectify, as my capacity to concentrate had vanished. Matthew gifted me with my first experience of “hurricane brain,” a commonality among folks leaving lives behind to flee a natural disaster…andthose who choose to stick it out and hope for the best.

Unfortunately, Matthew seems to have started a trend, paving the path for Irma, an exceptionally watery tropical storm. Next came Florence, which slowed to a crawl and lumbered off the coast for so long that a few friends and I bade the Weather Channel good-bye and sneaked in a delightful “hurrication” down the coast to Ponte Vedra. And most recently, Dorian, that behemoth which sadly hunkered down in the Caribbean, claiming lives and churning parts of the Bahamas into giant trash heaps that I can’t fathom can ever become habitable again. All this before spinning up the Carolinas coast and eventually wreaking more damage way up in the Maritime Provinces.

This latest storm took its time, creating confusion among coastal residents as to whether they should evacuate as instructed or stick around and hope for a miss. That decision is, of course, like Russian roulette, because no one really knows what will eventually happen. We wonder, we wait, we stress.

With the increasing possibility of hurricanes, my go-to behavior is now to completely prepare, whatever that may mean, and then to embrace “the don’t-know mind.” As Zen Buddhists say, “The don’t-know mind is a powerful place to be.” Simply put, not knowing the answers to some of life’s big questions, accepting the fact that for the present you don’t know, and choosing not to worry about the outcome, can certainly remove a bit of stress.

“I don’t know” questions beliefs, such as “A hurricane destroys everything in its path. My house, my friends and my business are all in its path, so I’m likely to lose everything.”

The thing is, you don’t know that for sure. Your apprehension will ease if you choose instead to focus on a positive belief, such as “I don’t know what the outcome will be of an impending hurricane” – or of any other plight, for that matter. Adding an upbeat mental spin inserts powerful positive energy into any situation.

“Be like a reed blowing in the wind.” Yes, those Zen Buddhists again.

Do your best to be flexible, get as ready as possible for whatever your challenge may be, be open to options, and stay present. You might be surprised – and pleased – at the pressure this can relieve. And…what the hey? That impending hurricane might just blow back out to sea.

Katherine Tandy Brown has traveled the world as a freelance writer for 25 years. She teaches memoir, travel writing and writing practice in USCB’s OLLI Continuing Ed program and in her downtown cottage. A certified writing coach, she is penning her first novel, One to Go: An Equine Thriller. ktandybrown@gmail.com or (859) 312-6706 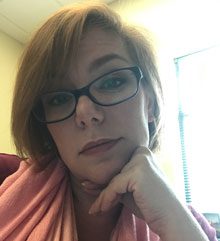 Routine vs. Ritual: Why Words Matter