January is a great month to appreciate our Lowcountry garden’s ‘quiet star.’ With all the overzealous green growth of summer now beaten back by frost, we finally have a chance to notice our little bewitching friend… the ivy.

Tried and true, its always been there whether we noticed or not.  Growing quietly around our more rambunctious ‘scene stealing’ garden stars.  Now we notice its elegance and loyalty. Southern brides, for hundreds of years, have incorporated ivy in their veils or bouquets, or as sugar leaves on their cakes, for it has always represented fidelity. With its clinging, loyal nature, it’s the perfect symbol for marriage.
Ivy is also a symbol of the Greek god Dionysus, god of wine, music and theater. As the story goes, his jealous stepmother Hera sought to destroy Dionysus after his birth. But his nurses screened his crib with ivy leaves and kept him safely hidden. As a result, ivy has the mythic reputation of being a protective talisman for all those who plant it in their gardens.
Okay, speaking of myths, let’s debunk three myths right now.

Myth Number One: Contrary to popular belief, ivy does not kill trees. Sometimes, if it gets big enough to bloom at the top, it will shade and stunt a tree’s growth for a time. But if you monitor it, you can snip a fat ivy trunk here and there to retard its growth. I had a scrawny, anemic magnolia in my garden and allowed ivy to grow up it. It now looks lush, beautiful, and green thanks to the ivy. And the magnolia’s growth outruns the ivy’s flowering at the top.
Myth Number Two: Ivy does not hurt walls, masonry, or buildings, so it’s not necessary to strip it off.  Ivy gets its sustenance from the roots planted in the ground, not the ‘clinging roots’ it uses to hold on to buildings. They only grow long enough (about an eighth of an inch) to hold on, then they die. Which is why sometimes large ‘walls’ of ivy will fall under their own weight.
Finally, Myth Number Three: “Ivy allows bugs to crawl up into my house.”  Not so, say experts. If the bug can crawl up your ivy, he or she can also crawl up your wall. (Well that makes sense – thanks ‘experts’!)

Ivy comes in every shade of green, but many varieties have leaves that are splotched, mottled or specked with white, cream, pink and even purple.  Leaf shapes can be sharp pointed or ruffled.
The UK is always ahead of us, as far as gardens are concerned, and about a year ago I read about the ‘National Collection of Ivy at Erddig House’ in England.  They have over 350 varieties growing there. One after another, with an unusual leaf shape, clamoring up a long garden wall. Well we can do the same here. Why not? Wouldn’t it be great if you created and grew the ‘American National Collection of Ivy’? It would put your cul de sac home on the map much like Lewis Wright has done with his incredible collection of 350 Camellias in a suburban neighborhood next to Parris Island. And the best part is, collecting ivy is cheap. For a couple of dollars you can get a rooting.  So for not much money you could have America’s premier collection of ivys! How’s that?
I love the idea of creating ‘collections’ of plants.  I got it from my cousin, William Lanier Hunt, who started a collection of irises in his teens and took those tubers with him to college at UNC. He found a small, abandoned lot east of the campus, bought it from the owner, and planted his collection there. He kept adding to the number of new iris varieties while he went to graduate school – he eventually became a teacher at UNC – until he had over 400 different Iris plants growing on the lot. That abandoned lot became the heart of UNC’s now world-famous William Lanier Hunt Arboretum  when my cousin gave it to the school late in life. I hope you agree with me that we need more amateur gardeners creating important collections that can be donated to future generations in the Lowcountry.  That’s how all those famous International garden collections we all read about got started! ‘From just one small seed’  – or cutting – an ongoing, living legacy for future generations to enjoy can be born… perhaps by you!
Did you know there are more than 500 different varieties of ivy in the world?

Want to learn more?  Then check out:
The American Ivy Society   www.ivy.org
Two great mail order sources of ivy plants are:
Marys Plant Farm  www.marysplantfarm.com
and Hedera Etc. will send you a very informative catalog
of over 300 cultivars, and their descriptions: e-mail: hedera@worldnet.att.net

September in the Garden 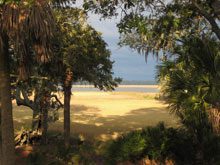