Mutually exclusive is a statistical term describing two or more events that cannot happen simultaneously. It is commonly used to describe a situation where the occurrence of one outcome supersedes the other. For example, we can’t have heads and tails at the same time. Can we?

No doubt, the binary life we lead has its advantages as the comfort food we think we can’t live without. Once we’re bloated like Violet Beauregarde in Willy Wonka and the Chocolate Factory,we feel we can no longer do without gluttony’s purple-faced embrace. It must be this way, mustn’t it? Can we not have a storm and the sunshine at the same time?

I have to ask what the big deal is with masks? I mean, don’t we wear them all the time anyway? Oh, you don’t believe they’re effective? Perhaps I agree with you on the technicalities of it all, but who cares as long as it alleviates stress in others? I understand this is not an issue elsewhere in the world. Remember it’s an election year and history has shown us certain people will do anything to attain and retain power. Reference the Dixiecrats in the 1968 election. Is this a political statement? I feel it’s rather a plea to be mindful. I mean we’re about to lose college football. As a son of the South, this is something I never even considered as a possibility.

In this apocalyptic time, “Tiger Rag” may no longer be able to raise gooseflesh over my birthplace—the Upstate of South Carolina. God knows my Carolina Gamecocks need a break after being blanked by one of Alabama’s native sons for the better part of the last decade. Is calling the implosion of college football and hopefully the downfall of the toothless NCAA apocalyptic, hyperbole? I don’t think so. Who would have ever thought the broken BILLIONS of dollars system that was college football would ever be called to the carpet by its “essential workers”? Must something be vilified so that the rainbow doesn’t show?

Speaking of billionaires, one in particular has just called for grace. History has shown he comments on everything within his purview and some of which is not within his purview. Yet he has been silent since George Floyd until recently, despite high-profile people calling him out. It’s been about three months since eight minutes and forty-six seconds changed the course of history. He came on national TV to practically demand grace. The voice of grace is innocent and quiet like a whisper, while its vibration is loud enough to fuel the spirit. His statement was neither a whisper nor did it fuel my spirit. Instead, it likely fueled more division. This will appeal to some of his fanbase as he, no doubt, calculated it would. To others, it will ring as intentionally tone-deaf as another college that held our very votes in their hands for generations.

The electoral college only offers mouth services and never guarantees to do as we’ve wished. This year’s election is perhaps the most important in our nation’s history and we have candidates that are more sizzle and scent than steak. I mean, would it really be that outlandish to have voted for Kanye West after some of the wild s*** that’s come out of D.C. this year? I was considering it if it became an “option.” There’s an example of non-mutually exclusive.

Since crazy pills are now available over-the-counter, perhaps 2020 is the last leap year of the travesty that is the electoral college. I mean, we’ve got a sitting President openly trying to screw with the postal system to make it harder to vote via mail. In contrast, we’ve got an elite level athlete arranging an MLB stadium, as has never been done before, to allow people to vote. Definitely not mutually exclusive.

It is difficult to see innocence in others when you cannot see it in yourself. Why can’t we be more than one thing at a time? Why can’t we be the person that is whole in one sense, but a work-in-progress in another arena? Why do we have to be complete in every moment and if we’re not—if we’re not, doom and gloom. The phrase, “always leave them wanting more,” comes to mind here.

Compassion in our most sacred of technologies. It’s not mutually exclusive to the chaos we’re all experiencing in our lives. I do feel that if you search for only love in the heart of darkness, you’ll find it. I mean love in the broad sense, not the rom-com ideal that we’d all love to make us sleepless. It is possible to continue with life while scared out of your mind if we embrace our God-given innocence. Some will be attracted to this innocent luminescence, others will fear it. Shine brightly anyway.

If there’s one word to describe the year of 2020 so far, that word is revealing. COVID apparently isn’t going anywhere and we’re not likely to find that elusive “new norm” any time soon. May we continue to reveal what’s in our hearts and minds. Lord knows certain things have been concealed far too long. 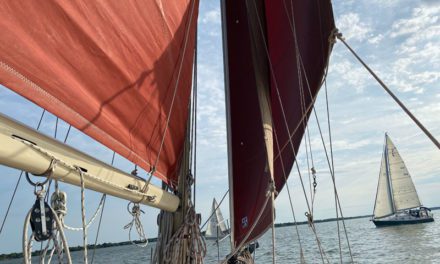 The Last Boat Wins the Race

The Season of Receiving