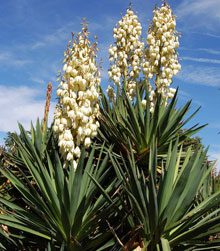 I met a young farmer who said he was growing Yuccas in one of his fields.  As a lifelong learner it was surprising to me that he was growing it for fiber, not as a landscape plant.

There are about 40 species of Yucca growing mainly in dry regions of North America, Central America, and the West Indies. As a landscaper I wasn’t fond of encounters with them while I was on my riding mower. Growing on a short trunk many yuccas have starchy underground rhizomes which seem to go to China if you’re trying to dig one up. The sword-like evergreen leaves are flat and stiff with needles on the tips. Most common on the Coastal Plain are Spanish bayonet (Yucca aloifolia), Mound-lily yucca  (Y. gloriosa), and beargrass (Y. filamentosa). As landscape plants they are drought tolerant, and the mound lily is tolerant of salt spray.  They all have striking architectural forms, and the white flowers are stunning, attracting specific nocturnal moths necessary for pollination and seed production. Plants typically flower in mid to late summer.

[Aside note for plant nerds.  When the Lily family got a divorce and split up over whose DNA was or was not like others in the family, yuccas had to move into the Asparacaceae family; subfamily Agavoideae.  When I was new to horticulture lilies, smilax, asparagus, yuccas, and agaves were all perfectly happy in the Lily family.]

Moving on to the outright usefulness of the yucca clan the offerings are very impressive.  In Europe yucca extract is being used as a soil drench and plant protectant agent replacing copper sulfate as a fungicide. The roots and leaves contain saponins which are made into foaming agents and soaps.  Many other yucca products tout cures from arthritis, high cholesterol, and dermatitis, to migraine headaches. Historically the green pods and fruits were cooked, flowers eaten raw or as fritters, and native people chewed on leaves which is high in Vitamin C and antioxidants.  Another source reported that fruits were fermented to make a ceremonial brew.

As a source of fiber used by Native Americans, yucca, cattail, palms, and grasses, were right at the top of the list. It is estimated that about 8000 years ago people began to spin and knot. This discovery led to identifying plants useful to that skill.  These plants could be made into thread, cordage, netting, baskets, sandals, moccasins, clothing, bedding, and housing.  Fibers of these plants have long cells with thick cell walls containing cellulose and lignin. Other fibers are obtained from the outer portion of stems on plants like hemp, flax, jute, and river cane (Arundinaria sp.)  Flower pods can also produce fibers as in cotton and milkweed.

Yucca leaves like palms can be split and woven into baskets, bowls, hats or roofs.  The leaves can also be pounded, scraped, and cleaned to produce a very strong twisted cord.  A useful material that can then be made into sandals, ropes, mats, skirts, capes, nets, hairbrushes, brooms, or baskets.

Yuccas are not only a very low maintenance, sustainable landscape plants, but with more research we may see a variety of products obtained from them.  We can have our cape and eat it too.

A Fancy Summer Sit-Down & A Farewell to Arms

Ahhh, Fall is Near